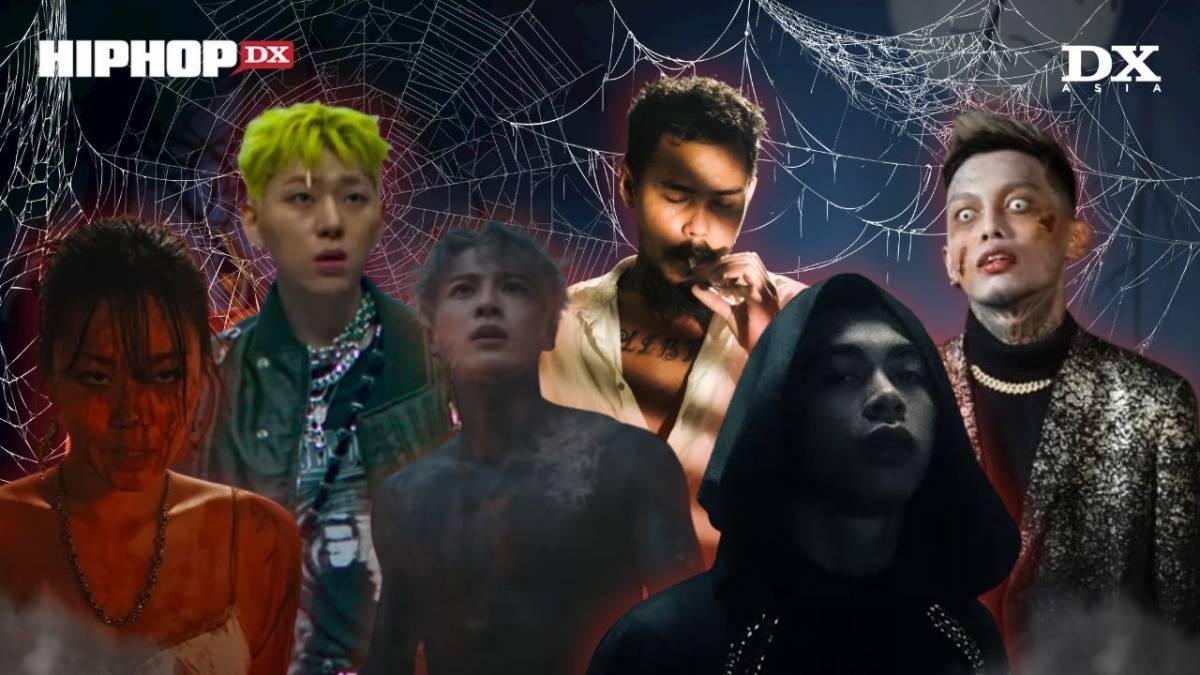 Halloween is upon us.

The hair-raising holiday is a night that has inspired and has since become synonymous with pop culture over the years: from horror movies, and theme parks, to costume parties—and hip hop and R&B are no exception.

To celebrate Halloween this year, check out our list of 11 Asian hip hop and R&B songs that are sure to get you in the right mood for the occasion. Warning: content may scare you.

“Cruel” is off rap star Jackson Wang’s highly anticipated album, MAGIC MAN, and one of the album’s first singles to be released earlier this year. The music video features a fire-breathing vampiric Wang in the midst of an apocalyptic battle.

In a press statement, the artist shared, “Once ‘Cruel’ came into our hands, it all made sense for us, it was like a beautiful mental breakdown. ‘Cruel’s’ grunge, and raw sound is exactly the perfect representation of the distorted and warped story that I am trying to unfold. It is the opus to a wild yet beautiful symphony.”

Fresh off his mandatory military service in South Korea, ZICO marked his return with Grown Ass Kid EP, which was released earlier this year. The music video for “Freak” features an apocalyptic world, complete with burning buildings and a society gone wrong. ZICO is subjected to what appears to be a brain-washing machine to join a zombie-like cult.

Filipino rapper JRLDM made a name for himself by unapologetically tackling dark themes in his music and equally-dark music videos. “PARASITIKO” (Parasite) featuring Owfuck’s Lexus is no exception, where the two physically manifest serious mental health issues such as hearing voices in their head and being pushed towards suicide.

Bordering on the sinister, the pair attempts to show the “invisible” effects of mental illness. The video features an almost delirious Lexus, dressed in a blood-stained hospital gown laughing to himself and laying on the ground. It’s sure to leave some goosebumps while providing commentary on the very real epidemic of mental health all over the world.

South Korean artist BIBI’s “Animal Farm” is not for the faint of heart. The music video comes with a disclaimer that the video may be inappropriate for some users, and audiences have to click that they consent to watch.

Inspired by Quentin Tarantino’s Kill Bill films, the visual is six minutes of gore. BIBI is drenched in a blood bath as she cuts off the heads of the story’s antagonists. This is not a video to watch if you get queasy easily.

Malaysian rapper Luqman Podolski channels Cabin in the Woods in his music video for “RING RING.” What starts as an innocent love story in the making at an isolated bar in the woods, quickly turns into a classic murder mystery.

As the reigning king of Cambodian hip hop, VannDa does not disappoint when it comes to merging culture with his art.

His double-feature video release for “Daddy Da” and “KING” is dark and ethereal, featuring a cape-clad VannDa and a haunting atmosphere. The “KING” half of the feature incorporates images of halos and psychedelic images of the rapper on top of a grimy beat.

Filipino rap duo switchbitch premiered the haunting “Salem Witches” off their Lalamunan (Throat) EP last year, where the two described the release as being “written and recorded while stuck in the world’s longest lockdown, contemplating ways to break out of it.”

The track draws parallels between the 17th-century Salem witch trials in Massachusetts and the Philippine government’s handling of the pandemic (Editor’s note: the latter was heavily punitive and militarized). The duo raps, “Masokista ka pala / Tangina enjoy mo pala tong mga parusa?” (You’re a masochist after all / Fuck, you enjoy all this suffering?).

Lalamunan made it to HipHopDX Asia’s ‘20 Best Albums of 2021,’ where we wrote: “Of all the things that make Lalamunan Album of the Year-material, it’s the brutal honesty that compels critical assessment as much as it does engagement…The subjects of switchbitch’s fury, derision, and pain are obvious: from the Philippine government to film director/producer Quark Henares (rapper Ez Mil didn’t escape the line of fire, either). The duo’s delivery acclimates perfectly to each track’s emotional demands.”

Filipino rappers Skusta Clee and Gloc-9 are stuck in a zombie apocalypse in “KARMA.” The music video has all the hallmarks of your typical zombie movie: hordes of zombies, a transformation, and even dance choreography. “KARMA” premiered on Halloween last year, and has amassed nearly 30 million views on YouTube since then.

South Korea’s sokodomo and Jay Park’s “MM,” short for “MURDERMIND” is a classic psychological thriller, where the main character rushes to work and hallucinates images of murder after going into a drunken stupor. This is a consistent theme in the video, as bloody action scenes start filling the mind of the main character when he goes home from work drunk.

The violent visual was named one of HipHopDX Asia’s ’20 Best Music Videos of 2021’: “The music video for ‘MM’ plays with sokodomo’s artistic underpinnings with such polish that the result is a scrappy yet visually masterful music video. Packaged as a Netflix-esque thriller, the fantastical elements are shown in full view to match the song’s raw lyricism… It’s pure escapism, portrayed in a way that might hit too close to some of us, as the ending might suggest.”

Malaysian rappers Kmy Kmo and Luca Sickta’s “Gong Nekara” can only be described as creepy. The music video’s intro is particularly ominous, with images of haunting red eyes from a supernatural being leading into the first verse. “Gong Nekara” is filled with imagery of typically eerie things: a blood moon, an unidentified multi-armed being, and dark forests. Goosebumps.

This list wouldn’t be complete without another switchbitch track; this time, the AHJU$$I-produced “Nightmare.” In a description of the haunting track, the rap duo writes in Filipino that under the seemingly unending COVID-19 lockdown, it’s like we’re having nightmares while awake.

They also referenced the Philippine government, saying, “Mas naging lantaran ang katotohanang lahat tayo ay pinapatay ng estado: hindi lang sa pandarahas at pagpatay ng AFP at PNP, pati na sa kawalan ng ayuda, pagtaas ng mga bilihin, at matinding kapabayaan sa pandemya.” (It’s become more openly clear that we are being killed by the state: not just of the violence and murder committed by the Armed Forces of the Philippines and the Philippine National Police, but also the loss of government subsidies, the rising prices of goods, and the overall apathy [from the government] surrounding the pandemic.)