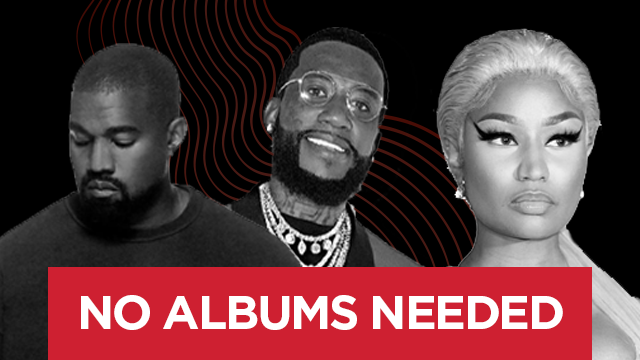 Let’s face it: though this year was packed with stellar releases, there are plenty of rappers who could clearly use some time off. Whether it’s because they are aimlessly chasing trends or simply have hit a creative lull, even the most talented artists can produce a misfire every now and then.

But the solution isn’t necessarily to create more work. Rather, it’s sometimes best to go on hiatus for a bit until the juices start flowing again.

Here are ten rappers who can benefit from taking a seat in the sidelines in 2020.

Marshall Mathers has undoubtedly secured his place as one of Hip Hop’s GOATs. But there’s no denying his recent batch of releases have been subpar. These days, Eminem grabs more attention for his petty beefs than his actual music. Despite having all the money in the world, Slim Shady is a notorious workaholic. That being said, rapping fast and being prolific doesn’t make you a great artist. When Eminem recently showed up on Griselda’s generally stellar WWCD, he was the weakest link.

Mathers could benefit from taking a page from André 3000’s book and becoming more sparse with his output. As he enters the 2020s, his fourth decade in the game, he should take a step back and regroup.

The innate talent, lyrical ability and bravado are all still there — it seems he just needs some time to hone his craft and figure out why he wants to be here.

2019 proved Hip Hop has moved past the sexist notion there can only be one successful female rapper at a time. Megan Thee Stallion, Lizzo, Cardi B and Yung Baby Tate (to name just a few) all thrived in their own lanes, illustrating Hip Hop is rapidly becoming more inclusive. Though Nicki Minaj arguably paved the way for many of these artists and fancies herself the queen, she hasn’t been bringing her A-Game for a while. Her 2018 album was meandering and overstuffed, while her 2019 output felt lackluster.

This past August, when she collaborated with Hot Girl Meg and jumped on the bandwagon of the “Hot Girl Summer” meme, it ultimately fell short. As her castle crumbles, Nicki has flirted with the idea of retirement. However, perhaps she shouldn’t spend the rest of her days hustling Myx Moscato and ranting on Queen Radio.

Taking a brief break from rapping (and perhaps the limelight altogether) can be what she needs to properly strategize how to reclaim the throne.

There was something a bit jarring about the harsh reception to Drake’s surprise closing set at Camp Flog Gnaw. Sure, that crowd was generally more geared towards alternative acts such as Frank Ocean, but one can’t help but notice the young audience’s crass reaction was partially due to Drake’s overexposure. Though he has consistently dominated the charts, it’s been a minute since he has truly put out something that matches the quality and gusto of Take Care or Nothing Was The Same.

With his successful track record, he’s on his way to eventually achieving GOAT status. But what’s missing is the artistic innovation and introspection that made his earlier releases so exciting. Drizzy’s catalog doesn’t need another project that mostly consists of B-Sides.

Maybe “War” is a precursor of what’s to come?

Iggy Azalea spent 2019 promoting two back-to-back projects that were derivative and stale. Instead of working hard to prove her haters wrong, she can’t stop firing blanks. No one is claiming Azalea was ever a purveyor of artistic excellence. However, she once topped the charts and could get pop singers to hand her some decent hooks. The “Fancy” rapper can take some time in 2020 to rebrand into something a bit more fresh.

Similarly to Azalea, Logic triumphantly put out not just one but two testaments to his mediocrity in 2019! But unlike the “Black Widow” rapper, he’s artistically ambitious. In March, he dropped Supermarket, a critically lampooned soundtrack companion piece to his novel. And then in May, he released Confessions of a Dangerous Mind — a project packed with cringeworthy lyrics. Clearly, Bobby thinks of himself as some grandiose visionary. What’s missing is any evidence backing his egotistical claims. Unless Logic is actually going to put out quality music, he should spend 2020 writing more novels.

Vic Mensa once showed some potential. It was only a few years ago that he snagged a guest post on The Life of Pablo. Recently, however, his career has gone off the rails. His last solo release, the 2018 EP Hooligans, was scattered and uneven. To follow up that project, he teamed up with Travis Barker and created the pop punk band 93PUNX. Early 2000s emo and pop punk are the latest trends for artists looking to score some nostalgia points. But there was nothing vaguely enjoyable about Mensa’s attempt at a throwback vibe.

He’s trying way too hard to provoke and not spending enough time on giving these well-worn genres a personal spin. In the video for his horrendous single “3 Years Sober,” he strives for edginess by donning a blonde wig and a sparkly Confederate flag dress. And in the video for “Camp America,” he takes a stab at “woke” relevance by portraying children locked away in ICE cages.

Though an artist should feel free to express their gender fluidity and make political statements, his generic songs don’t come close to matching his bold imagery. 2020 doesn’t need another Mensa project — whether it’s Hip Hop, pop-punk, emo or klezmer.

In addition to signing a KitKat sponsorship, Chance the Rapper has the honor of being the corniest rapper in the game. Yes, his intentions are probably good. But his songs are undeniably self-righteous. The Big Day was an ode to the joy of marriage that lacked any vision, gusto and ambitions going beyond commercial viability. Let’s be honest: Chance’s relentless barrage of optimism is getting a little tiresome and starting to come off as boastful. Even if his last album was a flop, there were glimpses of talent sprinkled throughout that served as reminders of a time when the Chi-Town native brought something fresh to the game. For the first year of the new decade, Chance could take a breather so when he eventually comes back, The Big Day’s painfully corny hooks are just a distant memory.

Since his 2016 release from prison, Gucci Mane has been tirelessly putting out projects. Unfortunately, there’s a lack of consistent quality. In 2019, he released two subpar albums and has appeared on numerous tracks ranging from Logic’s “Icy” to Doja Cat’s “Like That.” Gucci is talented and even on his worst days, possesses an effortless charisma. But it’s been a while since he’s delivered a project or guest verse that’s truly great. Maybe by not putting out multiple projects for a year, the “Lemonade” rapper can focus his attention on one album — or song — that’s actually stellar.

In 2019, for the first time in their relatively short career, the Hip Hop boy band Brockhampton came out with a lackluster project. Despite featuring a few bangers, Ginger was overwhelmingly bland. Last April, the group’s de facto leader Kevin Abstract released a great solo album that could’ve been seen as a foreshadow of what’s to come. The internet savvy group has gotten to where they are today because of an impressive work ethic. Making so much music with such a large collective is undoubtedly tiresome. Though their legions of passionate fans will probably be disappointed, 2020 can be the ideal time for Brockhampton to work on a magnum opus that proves why they are America’s favorite boy band.

At this point, the Kanye West album cycle is beyond exhausting. It’s a twisted ritual that drives fans, music journalists, the Kardashians and Def Jam executives insane. By the time Jesus is King was released last October, there had been numerous missed deadlines. And on top of all the chaos and drama, Yeezy’s foray into gospel music was underwhelming. Ye’s albums always had their polarizing elements (gather four people in a room and you will get 10 takes about Yeezus), but since 2018, his music increasingly doesn’t have vision or flair. Instead of being interesting, Ye and Jesus is King showed blatant signs of laziness.

These days, it seems like he’s good at creating commercially successful clothing, headline-grabbing moments and meme-worthy lyrics about Chick-fil-A. Kanye is far from a complete flop — his latest albums still have their standout moments. However, he needs to contemplate what he’s trying to say as an artist. One year without operas, albums or iMax films can do him good. If he wants to make gospel music for the rest of his career, sure, go ahead. Clearly nobody can or will stop him.

The problem isn’t the content — it’s the sloppy execution.