Review: Vic Mensa’s "Hooligans” EP Is All Over The Place 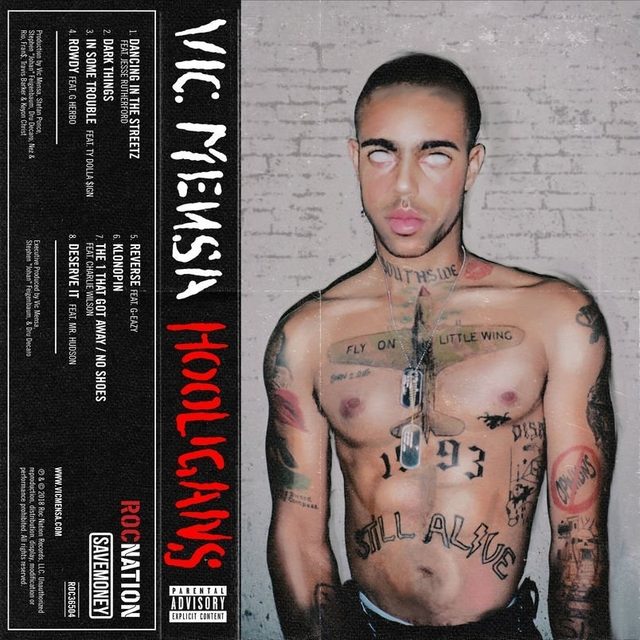 When Vic Mensa entered the scene, he seemed destined for cross-genre success. But fast-forward a few years later and he’s more known for his strong opinions and feuds than his music.

On his new EP Hooligans, a follow-up to his 2017 debut album The Autobiography, the Roc Nation artist dabbles in multiple genres and invites numerous guests to assist in crafting a banger.

In spite of its ambitions, Hooligans meanders and repeatedly comes off as forced.

For all its flaws, Hooligans kicks off strong. “Dancing in the Streetz” feels epic with Vic Mensa painting a picture of his self-destructive Hollywood lifestyle over a riveting beat. However, the EP’s intro also foreshadows the project’s overall flaws. The track collapses into a sluggish rock outro sung by Jesse Rutherford, the lead singer of alternative rock band the Neighborhood. Though this type of mash-up is an intriguing idea, the execution is a bit lazy.

Mensa repeatedly illustrates his nihilist debauchery through Rap rock. On “Dark Things,” he flirts with self-destruction in the lines, “Feel like Amy Wine again/ this is Absinthe, not, Heineken, 25, running out of time again/ 27 Club, how can I get in?” Substance abuse and mental health have been at the forefront of the Hip Hop discourse in 2018 so it’s a bit jarring for a rapper to throw subtlety out the window and be honest about how drug addiction can spiral.

Throughout his career, Vic Mensa has worked with some of Hip Hop’s most intriguing artists. On this EP, he continues that streak. Despite not always being successes, Mensa holds his own and rarely gets overshadowed. Ty Dolla $ign finishes off his marathon of a year by popping up on the sensual track “In Some Trouble.” Later on, fellow Chicago rapper G Herbo helps turn “Rowdy” an energetic banger. But once again, Mensa misfires when he’s trying too hard to be earnest. While “The 1 That Got Away/No Shoes” has a heavy-handed chorus from Charlie Wilson, “Deserve It” can’t overcome its cliche production. Though it features some of Mensa’s most introspective lyrics, any semblance of individuality fades as he channels Drake on the chorus.

A messy project like Hooligans suggests that Vic Mensa is at some sort of crossroads. This EP shows that his main issue isn’t laziness but rather an inability to focus and hone in on one of his strengths.