Review: Chance The Rapper's "The Big Day" Is A Dud 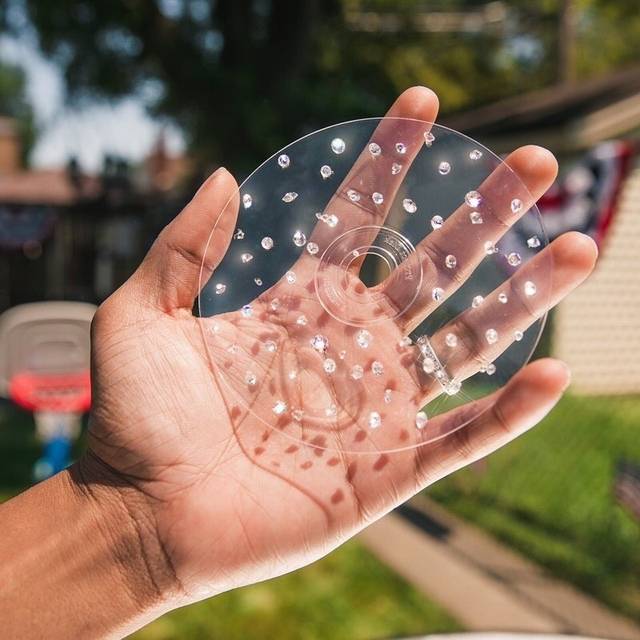 Despite having released multiple award-winning projects in his career that resulted in numerous accolades, Chance The Rapper has released what he deems appropriate to call his debut album: The Big Day.

As previously stated, HipHopDX takes all of our album reviews seriously and once again, we invite you in on the reviewing process for a big release that’s nearing its way to the top of the Billboard Charts.

Kyle Eustice (HipHopDX Senior Writer & Editor): This album has me thinking Chance should stick to Kit Kat commercials and philanthropy.

Trent Clark (HipHopDX Editor-In-Chief): Well, most of the album is in that vein. “I Got You” sounds like the opening credits of a Tyler Perry movie.

Aaron McKrell (Four-Year HipHopDX Contributor): This is his sophomore effort. Mixtapes don’t win Grammys. Coloring Book by every sense of the word was an album.

Trent: If we’re gonna play along with the whole “debut album” thing, I failed to hear anything that warrants the meticulous rollout. I mean … a DaBaby and Megan Thee Stallion feature?!? It doesn’t get any more trendy than that in 2019.

Justin Ivey (HipHopDX Senior Writer & Editor): Chance grossly overestimated how compelling his marriage and relationship are. On top of having a shocking amount of subpar to straight-up wack songs, The Big Day is a tedious and boring effort from front to back. Guest appearances like Meg and DaBaby are the only moments that interject some life into it.

Kyle: I went in really hoping to be impressed. I missed the Coloring Book hype and I was expecting to be blown away by some rapper/singer prodigy. But I ended up wanting to skip through most of the songs. I found a lot of the lyrics to be cringeworthy too. On an album that’s intended to reflect the hallmark of marriage, why is he even rapping about side chicks and what they can or can’t do, ha?

It’s like Mac Miller’s The Divine Feminine. He’s supposed to be honoring women but spends half the album talking about “fucking” and Ariana Grande’s “pussy.” Wow, what a tribute.

Aaron: What does everyone think of the production?

Trent: It’s all over the place like a messy room.

Aaron: Agreed. I’m left scratching my head at this. This isn’t just an album that misses the mark. It’s one that tries to hit several different targets and fails at most of them. The drop-off is astounding.

Marcus Blackwell (Two-Year HipHopDX Contributor): After all the time since Coloring Book, I was hoping for something special. The moments of the album where you start to feel like things are headed in a positive direction you’re hit with a “Hot Shower” or a “Get A Bag.” [Laughs]

Kyle: Like I mentioned earlier, I had heard endless praise about Coloring Book and really thought I was in for something special with Chance’s “debut” studio album. Instead, I got a bunch of tawdry lyrics, half-baked ideas and a lazy attempt at cohesion.

It really pains me to see albums like this spring up in Hip Hop. I fully understand the album cover now because this shit is audio hand sanitizer.

Daniel: This album is like the ending of Shrek where all those random characters show up and start manically dancing for no logical reason. (Why is MadeInTYO here? What does he add? Who ordered his Uber?)

Overall, it’s pretty disappointing. He’s trying to please everyone, and very few songs really stick… does debut album mean first Chance album that’s cynically for streams? His mix of collaborators is interesting; there are alternative musicians meant to trigger indie nostalgia like recording with Death Cab for Cutie’s Ben Gibbard, while also a roster of guests that are clearly there to try to muster a crossover hit, like grabbing Shawn Mendes for “Ballin & Flossin.”

Justin: I think Chance has unfairly been called corny at times, yet this album is one of the corniest projects I’ve ever heard. Some of the lyrics on “We Go High,” in particular “I don’t need an EGOT as long as I got you, God,” gave me secondhand embarrassment.

I’ve enjoyed all of his previous projects, but I never want to hear this one again. Labeling this as his debut album alters the perception of his discography too. It’s harder to dismiss this as a simple misstep multiple projects into a career like other artists.

The Big Day is a week from tmw. Headphones dolo or Speakers with friends?

Aaron: What does everyone attribute to this drastic change from his previous work?

Trent: The dropoff can be attributed to him and his team being so ingrained with their independent hustle that they don’t make free-flowing art anymore. Everything is calculated and commercial for coins.

Marcus: The fact that it’s 22 songs only highlights how disorganized the project is. There are some tracks that I actually like scattered throughout, but none that really compare to the best from his previous projects.

Daniel: His two mixtapes were also similarly eclectic, but these collaborations feel less exciting and more calculated. And when he’s trying to do “classic Chance” the results are mixed (Yes, “Get A Bag” is bad).

As far as performances go, I guess Nicki Minaj did a good job? “Zanies and Fools” was a highlight for me but compare it to a song like “No Problem” and it’s still a step down in terms of quality.

Trent: Watch these songs get cherry-picked for the corniest campaigns to pad the bank account. It’s just a shame when artists get propped up to be a spotlight position that the music rarely reflects something authentic and raw.

And for anyone out there wondering: this is the type of album to compare to The Carters’ EVERYTHING IS LOVE. Hip-pop doesn’t always have to suck.

Daniel: Trent’s EVERYTHING IS LOVE comparison is interesting. Perhaps, a lot of these weird/erratic creative choices stem from Chance’s inability to sing/execute his own hooks?

Aaron: I don’t know about that. The hook on “Do You Remember” works well and he demonstrated hook prowess throughout Coloring Book.

Trent: OK, let’s pump the brakes. What’s keeping us from giving this a complete zero?

Kyle: I like that he at least tried to pay tribute to his wife. Not too many men, especially in Hip Hop, attempt to wear their heart on their sleeve for the entire world too often.

Daniel: “Do You Remember” is a solid song. I agree with sentiments about how confusing the theme is … it’s supposed to be a concept album but it gets muddled by the inclusion of songs that come out of nowhere. And I wouldn’t really mind it if these songs were actually catchy bangers! “Hot Shower” isn’t it, however.

Trent: I do like the title track. It’s reminiscent of Seal’s “Crazy,” which oozes out ethereal vibes.

Daniel:: Yeah that song and “Do You Remember” are the few moments in which it felt like the album’s concept was successfully communicated. What other album is this fiasco comparable to? And Megan Thee Stallion’s verse on “Handsome” was fun, even if the song isn’t that great.

When was the last time something was so hyped and so lackluster?

Justin: You ask what’s good? I say nothing. Are there a few songs that are fine in a vacuum? Sure. But there’s nothing redeeming enough as a listener to seek them out on their own on a 22-track album.

With so much music to consume these days, there’s no reason to revisit anything from such a self-indulgent album that’s completely off the rails.

2/5 would be a generous rating for this album.

Marcus: I’ll be alone in this but my rating is at a 3. Songs like “Eternal,” “Roo,” “Sun Come Down” and a few others are a lot stronger than I initially thought, as well as some of the eclectic production.

Yes, the lows of the album are obviously terrible, and its content is still pretty tedious throughout. Despite that, there are enough redeeming qualities to get a 3 from me.

Trent: I think people really underestimate how an album flow factors into a rating.

If a listener can’t fully absorb the artistic expression within the confines of the album’s duration (or even get through it without being distracted) then it’s a missed opportunity and a clear deficiency in quality.

Did everyone make it through the album in one sitting?

Aaron: I got less than halfway through before I took a break. The flow was off.

Daniel: Almost… I had to take a break after “Slide Around.” [Track 17]

Kyle: I did, but it quickly became background noise. It wasn’t captivating in the slightest.

Trent: Is this album a fail if these songs get placed in commercials and TV shows and he becomes Chance The Rapper Mascot?

Justin: Regardless of any commercial success or business opportunities it elicits, it’s a failure on the very basic level of being a good album. He billed it as his debut album. I can only judge it as such a body of work, not as a glorified vehicle for placements.

Aaron: I agree with Justin. I don’t care if any of the joints become some catchy jingle. In fact, that would actually prove our points that this aims for nothing more than commercialism.

It pains me more to see what Chance has turned into. Considering his comments leading up to the album about it being thematically inspired by his wedding day, I expected an inspiring, intimate, soulful record that emanated the feel of what may have been the happiest day of his life. And this album could have been that, had he stayed focused. Yet, even though the wedding theme pops up throughout the album, it feels disjointed, and, like Daniel said, as if Chance is trying to please everybody. Chano aims for relatable raps, but songs like “5 Year Plan” lack the entertainment value that permeated Coloring Book.

There are a few moments where nostalgic Chance shines through; I am personally fond of the melody and vibe of “Do You Remember.”

While he may have grown, his projection of that maturity doesn’t translate to quality music here.

Marcus: With that said, if these songs end up getting placements on significant commercials and tv shows, it wouldn’t be a failure from Chance’s team perspective. The music makes you feel like that was a major objective.

Aaron: 2.2. The Big Day will go down as one of the biggest disappointments in rap in recent memory, in no small part because Coloring Book was so great.

It counts as Hip Hop, but barely. I understand the genre is flexible so I won’t go far as to say it’s not. But the random songs are also either cookie-cutter attempts at radio play or just throwaways. The magic touch he had seems to have turned erratic.