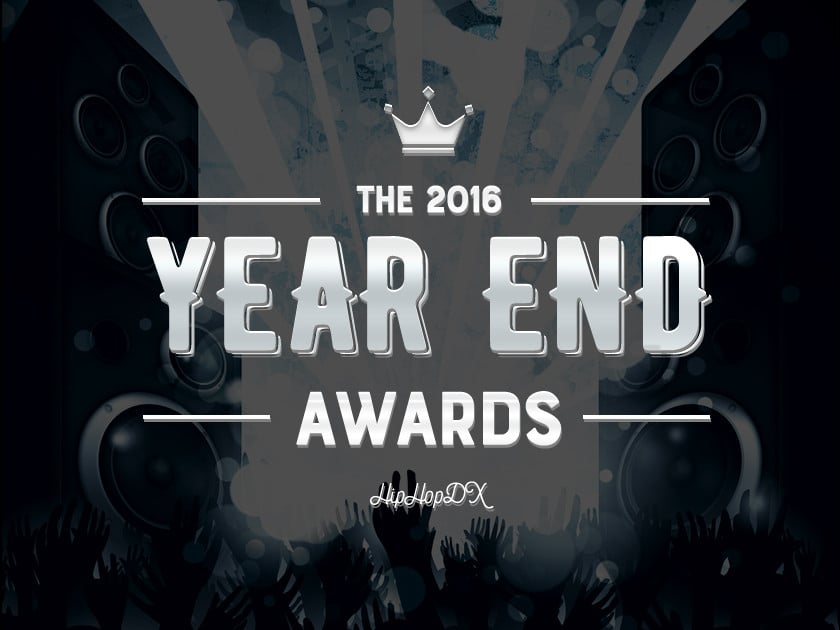 Another year has come and gone. 2016 was 365 days worth of fun, controversy and tragedy. Music-wise, it was perhaps one of the most diverse years in recent memory as we got nostalgic with new albums from A Tribe Called Quest and De La Soul while newcomers like Lil Yachty and Lil Uzi Vert rattled our perception of what Hip Hop could be. We were gifted with plenty of club bangers and a dose of spirit-filled tunes from Kanye West, Chance The Rapper and more. It seemed there was a balance of wokeness with just enough ignant to either inspire us to make a change in the world or simply to help us escape it for a bit.

Here are the 2016 HipHopDX Year-End Awards.

Check Out The Complete List Of Best Rap Albums

This year, HipHopDX is distinguishing between the best rap songs (a.k.a. the most lyrically and sonically potent) and the ones that had the most impact culturally. That’s why we’ve made two lists: the 50 Best Hip Hop & Rap Songs Of 2016 and the Top 50 Most Lit Songs of 2016. The goal here is not to widen the divide between purist and partier but to give excellence its due. Peep game.

Rihanna created an anthem for the females with this one. The visuals say it all, as Rih embarks on a full-blown mission to kill. Don’t mess with Badgalriri.

MC Of The Year

Critical acclaim is something Chance The Rapper has grown accustomed to over the years (see his 2013 season with his breakout project, Acid Rap, topping several year-end lists). But that was only the beginning. Then it turned out his exceptional verse on Kanye West’s “Ultralight Beam” in 2016 was really the beginning. In May, he released his Coloring Book “mixtape” to great critical acclaim and that was still only the beginning. At just 23-years-old, the Chicago icon defied the odds and championed the first streaming-only album to ever receive a Grammy nomination, going up for Best Rap Album and Best Rap Song (and Performance) for “No Problem”.

At the close of 2016, Chancelor Bennett is the one holding the golden microphone. And it still seems like it’s just the beginning for the talented young MC.

Producer of the Year

Producer hype is not only in high demand these days, it’s a cultural norm. But Kaytranada ensured that he made the loudest statement with his music — and music alone, without so much as a promotional tag or by capitalizing off a very revealing interview. The greatness of his debut studio album, 99.9%, was apparent, as it blended the ripest additives of Hip Hop, R&B, electronica and funk and turned them into audio refreshments. But the Montreal producer also blessed Anderson .Paak, Chance The Rapper, Mick Jenkins and others with beats that helped them improve the quality of their projects and the world was better for it. Salute to Metro Boomin, Mike WiLL Made-It, Allen Ritter, Zaytoven and of course Kanye West, but Kaytranada got the beatmaker’s crown of 2016.

Check Out The Complete List Of Slept-On Rap Albums

Video Of The Year

Sorry guys, but Queen Bey wasn’t playing fair in 2016. Not only did she run away with the top-rated album on the site this year, she surpassed everyone in terms of creativity by putting the package in a visual format. While Desiigner’s “Panda,” Kanye West (or mainly Teyana Taylor’s) “Fade,” DJ Khaled and Nas’ “Nas Album Done,” Vince Staples’ “Prima Donna” and A$AP Mob’s “Yamborghini High” definitely made a splash (among others), it was Beyonce’s layered depiction of intuition, denial, anger, apathy, emptiness, accountability, reformation, forgiveness, resurrection, hope, and redemption that warranted the most repeated viewings.

Mumble Rapper Of The Year

2016 was the advent of the Mumble Rapper. We were forced to listen to 21 Savage, Lil Yachty and Lil Uzi Vert whether we wanted to or not and there was a clash between old heads and the new generation that was inescapable. While Future could be considered the godfather of the whole mumble rap movement, our Mumble Rapper of the Year Award goes to Young Thug. Or Jeffrey if you prefer.

Thugger has become a pop culture icon for his daring fashion choices and wild personality. The Atlanta rapper released not one, not two, but three mixtapes this year, two of which landed in the Top 10 of Billboard’s Top 200 albums chart. He was part of one of the hottest songs of the year with “Pick Up the Phone” and was featured on many of the year’s biggest albums, including Kanye West’s The Life of Pablo and Usher’s Hard II Love. Where will he pop up next? We don’t know but we’ll be sure to get the memo ASAP.

Since stepping out of prison at the end of May, Gucci has been on a musical tear. He has released two studio albums, three EPs, and a mixtape. That’s in addition to the four projects that dropped this year while he was still behind bars. Mr. East Atlanta Santa turned 2016 into a one-man No Limit Records album release schedule: and he’s had a tremendous impact.

Check Out The Complete List Of Hardest Working Artists Of 2016

Collaboration Of The Year

Every now and then, a celebratory record rises to the occasion, giving us all reason to celebrate that last $2 in our pockets like we just won the lotto. Fat Joe and Remy Ma made their long-awaited collaboration dreams a reality this year with the first single from their album. “All The Way Up” took up a life of its own and brought French Montana and Infrared (and even Jay Z) along for the ride. And wouldn’t you know, they fucked around and got Grammy nominations for Best Rap Performance and Best Rap Song. Nothing can stop them … you know the rest.

Beat Of The Year

Great Hip Hop production can do a lot of things but it doesn’t always evoke rappers to bring out the #Bars. Which is what made Young M.A’s “OOOUUU” so damn irresistible. The track, scored by U-Dub of NY Bangers, propelled M.A to spill Hennessy all over the booth to obtain her biggest hit to date, and it also inspired the likes of Nicki Minaj, Remy Ma, A$AP Ferg, French Montana, Yo Gotti, Jadakiss and more to bring out those #Bars as well. Additionally, it was the soundtrack to the short-lived (and ridiculous) beef between The Game and Meek Mill so, even more kudos to U-Dub.

Verse Of The Year

[Verse 2: Chance The Rapper (via Genius)]

When they come for you, I will shield your name
I will field their questions, I will feel your pain
No one can judge
They don’t, they don’t know
They don’t know
Foot on the Devil’s neck ’til it drifted Pangaea
I’m moving all my family from Chatham to Zambia
Treat the demons just like Pam
I mean I fuck with your friends, but damn, Gina
I been this way since Arthur was anteater
Now they wanna hit me with the woo wap, the bam
Tryna snap photos of familia
My daughter look just like Sia, you can’t see her
You can feel the lyrics, the spirit coming in braille
Tubman of the underground, come and follow the trail
I made Sunday Candy, I’m never going to hell
I met Kanye West, I’m never going to fail
He said let’s do a good ass job with Chance three
I hear you gotta sell it to snatch the Grammy
Let’s make it so free and the bars so hard
That there ain’t one gosh darn part you can’t tweet
This is my part, nobody else speak
This is my part, nobody else speak
This little light of mine
Glory be to God, yeah
I’ma make sure that they go where they can’t go
If they don’t wanna ride I’mma still give them raincoats
Know what God said when he made the first rainbow
Just throw this at the end if I’m too late for the intro
Ugh, I’m just having fun with it
You know that a nigga was lost
I laugh in my head
Cause I bet that my ex looking back like a pillar of salt
Ugh, ’cause they’ll flip the script on your ass like Wesley and Spike
You cannot mess with the light
Look at lil’ Chano from 79th

It doesn’t take much backstory to perceive that Chance left the pulpit in splinters after he set off Kanye West’s self-proclaimed “gospel album,” The Life of Pablo. The unforgettable sermon paved the way for his more heavenly Coloring Book and will forever make listeners scream chuuuch when they play it back.

Comeback Of The Year

You couldn’t open up any social media platform without seeing Gucci Mane in your face following his release from prison in May 2016. But when you factor in the obstacles A Tribe Called Quest overcame, it’s evident who the clear winner of the year’s best comeback was. It must have taken a legendary effort to band together again after 20 years in limbo to create one of 2016’s best albums while dealing with the sudden passing of one of the founding members. Then, to go and perform for a national audience on SNL in a perfect tribute to the group’s fallen brother. The Kings of Queens were pretty damn magical in 2016 and for that, we give them their props. Long live Phife Dawg.

Most Slept-On Rap Albums Of The Year If you’re a Nickel Nine fan, there was undoubtedly some conflict in picking your favorite project between Tabernacle: Trust The Shooter and Layers. Whichever you chose, there was no question that Tabernacle bucked down any doors his sixth studio album walked through this year. It was a project bathed in immense storytelling, endless battle rhymes and seamless lyricism — and those are just the first three tracks. We don’t hate Cardi B, but the bars were so bad they made us look forward to her cackle.