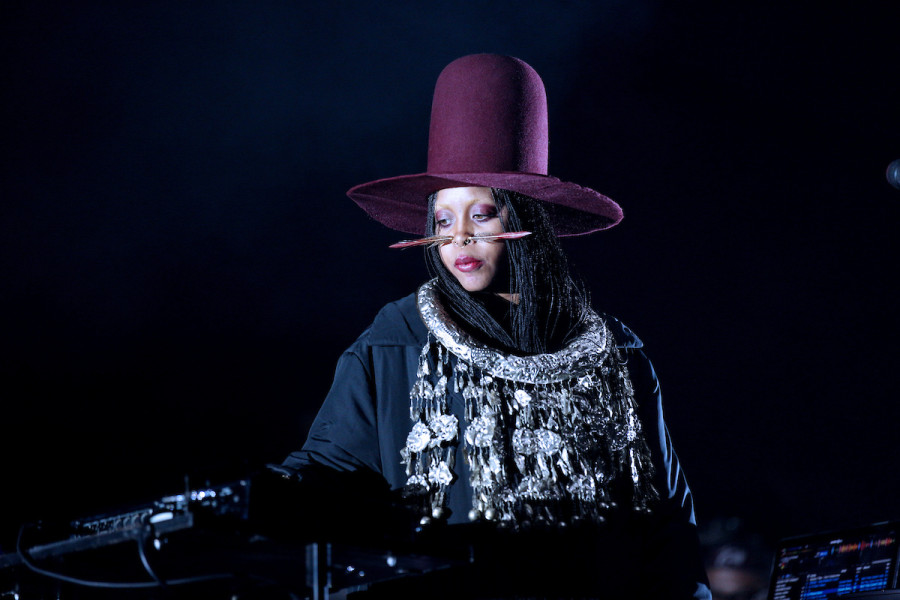 The Red Bull Sound Select #30DaysInLA concert series continues. This time, with one of my favorite R&B artists. . . ever. I used to say the same thing I did about Ty Dolla $ign, everything Jeremih touches is gold. His voice is incredible. This event took place at The Mayan in downtown Los Angeles.

The evening started with an interview with Fake Shore Drive founder, Andrew Barber. He is super dope and a huge influence within the city. He created this blog/platform to shine a light on Chicago’s Hip Hop scene, which helped cultivate the careers of artists like Chance The Rapper and Vic Mensa. Man, Chi-Town got all the stars: Kanye West, Jeremih, Common.

The night started off with a surprise performance from Chief Keef. Oops, I forgot to add him to the Chicago stars above. Or did I? Just kidding. I actually love Sosa (cue track), but he flaked on an interview at the last possible second. I was definitely salty. His set got a bit rowdy, which was a weird pregame to Jeremih. But hey, #GBE.

Now you in my living room twerkin' ? Shout out to #Jeremih bringing out #TheGame for All Eyez ?? @losangelesconfidential @jeremih @rbsoundselect #30DaysInLA

We ruined the surprise for ourselves when we were backstage because we saw The Game and YG roll through. The crowd ate it up, though. “All Eyez” is in heavy rotation, one of my favorite collabs this year. YG came out and did his usual “Fuck Donald Trump,” which led to “Don’t Tell ‘Em” with Jeremih. Here for it. It was the West Coast in the building tonight.

Hearing “Impatient” live made my night. Late Nights was one of my favorite albums. I can’t believe it dropped in 2015 because it’s definitely still in rotation to this day. He played all his hits, and then some.

While my night would usually end there, not tonight. I had an after hours event to go to (for once). You know I’m not about that party life, so this was something different and special. It’s called Sleepless: The Music Center After Hours, and it took place at the Dorothy Chandler Pavilion in The Music Center in downtown LA. Shout out to my squad for being down for the cause.

I’m definitely that annoying girl that says “MAKE A WISH!” every time I see the clock at 11:11. I thought it was so dope that the event started at 11:11pm on November 11 (11/11). Huge thanks to Lisa for the press passes. Tickets were $20 online, and $30 at the door. It looks like it sold out too (as it should).This event was legit. It was just so interesting and unlike anything you’ve seen before. It was literally snowing when we arrived, and everything was so pretty to look at.

Sleepless: The Music Center After Hours inside the Dorothy Chandler Pavilion.

The idea was to create a dreamlike space for you to enjoy, and it was extra special in the middle of the night. Everyone looked like they were having a ball, and we joined in on the mayhem. There were exhibits all around the building, which were massive. The Music Center is a really nice space, three stories with high ceilings and beautiful chandeliers. There were DJs, bars, a dance floor, a guide that told you where everything was (thank God).

The 3D Blacklight Lounge with trance-like music in the background.

One of my favorites from the evening: the 3D Blacklight Lounge. This neon painted room was lit. It felt like one big acid trip, to be completely honest. There were definitely people on some substances tonight. I don’t blame them. The visuals, the ambiance, the people: this was the perfect setting.

The gorgeous harp located in the basement.

We found our way through, walking by a storyteller (literally telling a story) and a very popular shadow performance. I couldn’t even begin to tell you what I was watching, but just know it was epic. We closed out with a beautiful harp performance, which took place underground. It made me laugh because next to the instrument, there was a sign with her set times. True life: I’m addicted to shows. I’m glad we caught her last set at 2:15am. It was a beautiful ending to the night.

It’s finally here! Tyler, The Creator’s Odd Future carnival, better known as Camp Flog Gnaw Carnival. I’ve gone every year and it’s a total blast (this is the third one). And this year, it was extended to two days. Fuck yes. Tyler’s a genius for putting this one on. Not only is the lineup always extra lit, but it’s a damn carnival. Who doesn’t like carnivals?

Tyler, The Creator’s GOLF clothing brand lined up with walls.

Rides, games, food, music. . . this was the spot to be this weekend. In fact, friends from the Bay came down just to attend. So you know it’s real. It always takes place at Exposition Park by USC, the perfect venue to set up a carnival. I really liked the words “GOLF” made of rose petals lined up along the walls. Tyler is a genius. Artists I had to see today were A$AP Rocky and Lil Wayne. Mission accomplished.

We had a pretty solid meeting spot. If you ever need one, the ADA platform (for handicapped) to the left of the stage had a dope view, and there was space. You could breathe. I’m really not about suffocating in the crowd. The carnival is all ages, and there were definitely a lot of kids. It made me feel old. I walked by a chick throwing up in a trash can and couldn’t help but shake my head (smh, literally). No judgment, I just remember those days all too well.

True life: we love A$AP Rocky. I definitely have no problem admitting I think he’s gorgeous. The stage was super dope, set up like an arcade video game. He hops out in a very expensive-looking jumpsuit, and I died. He is the true “Fashion Killa.” Unfortunately, he didn’t play as many songs we’d liked to hear. This may have to do with him being 15 minutes late for his set. This A$AP Yams tribute made up for it.

The carnival was huge, so getting from one stage to the other was a bit of a mish. Of course, along the way, you can ride a bunch of rides and play games, all which require money. Smh. Tyler is getting that paper. We caught the end of DJ Mustard’s set and realized as we were approaching that G-Eazy was on the stage. Now that he lives in LA now, I literally see him everywhere. Right, after that, YG. Definitely saw him last night. This is getting out of control.

There was a long debate over watching Kehlani or Tyler, The Creator, we started with Baelani (my girl from the Bay), then realized we didn’t want to miss Tyler’s set. He ended up bringing out YG. “Fuck Donald Trump,” again. I’m constantly wondering if artists get sick of playing their own songs. Serious question.

.@LilTunechi too short to be wearing a 5 XL white tank lmao

Lil Wayne started at 11:30pm and performed until 12:15pm. I was upset, he was supposed to go a full hour. But hey, those 45 minutes were gold. He’s one of my favorite rappers all-time. Weezy F Baby, please say the baby. I legit couldn’t get over his extra long sleeveless white tee that went down to his ankles.

Here we go. Camp Flog Gnaw, day two. I always think of Coachella when people do that. When everyone’s social media posts are “COACHELLA DAY ONE” or “COACHELLA DAY THREE.” Super basic. But Tyler, The Creator isn’t basic. I super enjoyed his tweet for the festival. Preach Tyler.

Exposition Park is not the easiest venue to get to, especially when you drive yourself. I literally put on running shoes today because yesterday my feet hurt so bad. Zero fucks. I arrived in the middle of Anderson .Paak’s set. He’s so great live. I’ve seen him before so I knew what to expect. If you guys haven’t, I highly recommend it. Malibu was too good not to hear in person.

One of the many festival merchandise tents around the carnival.

Anderson brought out Mac Miller to perform “Dang!” off Mac’s The Divine Feminine album, another solid project (especially musically). There’s always downtime in between sets, which we can all appreciate because there’s so much to do at this carnival. Perfect time to go get food, merch, ride rides, play some games, go to the bathroom. So many people were rocking Camp Flog Gnaw merch. Each item is super cute too, especially the girly colors available. Tyler set the trend with that one.

Yo, this Sky Dancer ride had us all screaming (and laughing). It was terrifying. I also have to correct my statement from earlier, the rides are actually free. The carnival games are what you have to pay for. I didn’t pay for my ticket (thank you Nick!), but if I did, I’d want the rides included. Good look, Tyler.

Next up, Erykah Badu. She’s the reason I came today. I’ve never seen her live and this was the perfect place to do so. I just realized all the kids probably have no idea who she is. Tonight, they met their match. She is wild, and I love it. Homegirl speaks her mind. She was very late to her set, which had us all concerned she pulled a Lauryn Hill.

She showed up, in a tall burgundy hat (which eventually came off) and all black. She starts off just singing “Hello” into the mic over and over again with her majestic voice. The old Hip Hop heads were probably dying, like me. I also have to point out this red feather Erykah has been rocking, that is attached to her septum piercing and sits perpendicular to her face. Slay. Hearing “Love Of My Life” hit the spot.

You know Erykah had to speak on the results of the election. She is such a strong female figure, which made her words extra powerful tonight. AND THEN, the surprise guest. Everyone was anxious to see who was going to show up. If you saw the set times, there was a blurb filled with “???” in between Erykah Badu and ScHoolboy Q.

Tyler, The Creator brought out Earl Sweatshirt. It was turnt. They brought every ounce of their energy on stage for us. It was epic. I had this tiny inkling of hope that Frank Ocean would pop up, but that was definitely just wishful thinking. At the end of their set, Tyler reveals their DJ: Erykah Badu. How epic is that? She was deejaying during her set prior, but shit. Homegirl just deejayed Tyler, The Creator and Earl Sweatshirt’s entire set.