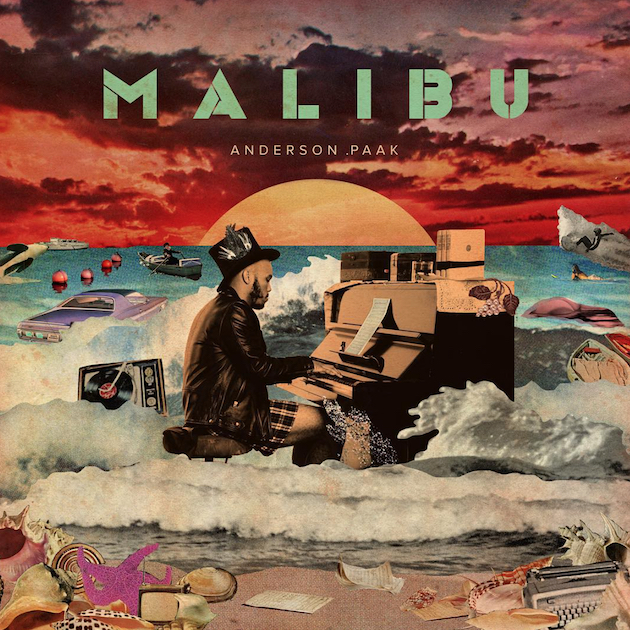 Minutes into Anderson .Paak’s delightful Malibu, you get the impression that the young, star-child formerly known as Breezy Lovejoy has finally put at least two fingers on his sound. There’s a mastery present that wasn’t before, as he moves from carefree crooning to low-key bars with ease. Malibu is jazzy, but not in the acid jazz way that was K. Dot’s To Pimp A Butterfly. The rhythms are sumptuous and contextual; the songwriting honest and playful. Anderson .Paak and his sunlit septum piercing may be just be gearing up for a breakout 2016.

The man’s had his difficulties in this life. His father arrested when he was young and his mother met the same fate. Call that the American story, at this point, as the U.S. has the largest prison population the world has ever seen. He was also once homeless. “There was a period of time where I was homeless, and I had a family. My son was a newborn. I just got married. That time of being homeless built a lot of character,” Paak stated. “That’s the foundation that I’m on right now. A lot of songs came out of that. I needed that shit.” Out of all that tragedy came art and, now, triumph. Malibu is Paak’s second studio album, and, as far as naming goes, follows in line with his Steel Wool / Obe debut Venice. Fearless is a word Anderson likes to throw around, and this album, while not breathtakingly bleeding edge, is chock-full of a man taking chances. His voice sounds transplendent on “Heart Down Stand A Chance” and “The Season | Carry Me,” where, on the latter, he voices the frustration of a generation, “I spent years being called out my name, living under my greatness / But what don’t kill me is .. motivation.”

For as good as the melodies and ripe drums and bass beats are on the album, more impressive is the songwriting. Anderson has writing credits on every single song on the album. Let us marvel, for a moment, at just how rare that is in today’s musical environment. He also works with a slate of top-notch producers and, God, it shows. Madlib’s addition to “The Waters” results in timeless beauty. The song could almost be an ode to Dilla’s work with Common and D’Angelo in “So Far To Go.” The rest of the list reads like a list of producers you should be begging to work with. 9th Wonder, DJ Khalil, Kaytranada, Dem Joints and so many others. Still, the music remains steady, never dipping off the track into experimentation for experimentation sake. If he’d have added FlyLo and his frequent collaborator and teammate in their duo Nx Worries, Kxwledge, and this would have been a beat-heads wet dream. Maybe the Hellfyre Club member (an independent record label that features the likes of Open Mike Eagle and Milo) would have tipped the scales too far if those two had been involved. There is no Dr. Dre, but you can’t expect the good doctor to stop running his empire long enough to get behind the boards these days.

Still, Anderson burst onto the scene on the back of Dr. Dre’s Compton, where he’s featured six times and his standout “Animals” became the de-facto best song on the album for many. He brings that element of danger here, washed over 16 tracks where you don’t see the music degrade in intensity or in wit. “Your Prime” roars more than half way through the album and “Celebrate” kicks the funk in your soul into gear on the penultimate track. His raspy delivery gives the notes he plays with context, a smooth human touch to what can sometimes feel like warmed up, robotic like digital production.

The guest verses here aren’t wasted, as well. ScHoolboy Q spits his most spirited and experimental missive in quite a while on “Am I Wrong,” which chimes of Radiohead’s “Separator.” Rapsody delivers another standout (honestly, does she take any bars off?), and features by The Game and Talib Kweli don’t muddle the world Brandon Anderson Paak has created on Malibu, instead they melt into the fray with relative ease.

Paak is a dreamer. In an interview with Hypetrak, he dropped this when asked if he had any words of inspiration, “Literally, man, be yourself and be a real believer in yourself. If you’re down, you got to get back up. A lot of people want this and they think it happens overnight, but there are no shortcuts, man.” What’s a bigger long shot than thinking you can make it? Yet, with Malibu, Anderson .Paak most certainly has arrived. Welcome.