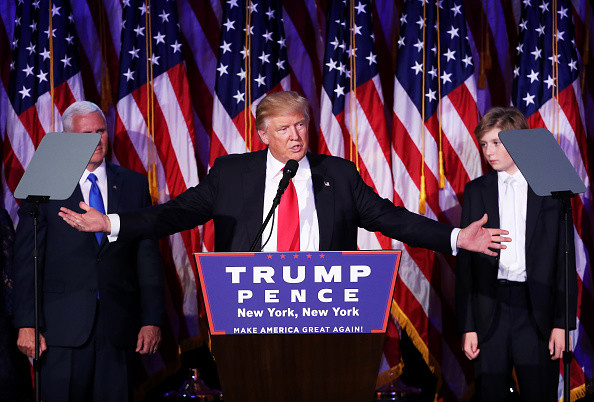 Renown businessman, Republican nominee and perhaps the most polarizing figure in the country (let alone Hip Hop pundits), Donald Trump has been elected as the 45th president of the United States.

The road to the Oval Office was a long and historic one for Trump. As the first non-politician to win the presidential office as well as the oldest to ever be elected to the presidency, he faced off against Democratic hopeful Hillary Clinton. The Donald and his running mate, Indiana Governor Mike Pence Mike Pence (R-Ind.) took an early lead in the polls Tuesday (November 8) and capped off the victory by winning the 10 electoral votes from Wisconsin at approximately 2:30 a.m. EST today (November 9) to garner the necessary 270 votes needed.

At approximately 2:10 a.m. EST, Clinton’s camp said she would not speak on the election until the following morning, but she reportedly conceded to Trump on the phone.

Leading up to Election Day, Trump and Clinton endured three debates that had the nation rolling its eyes. Both candidates went through their fair share of scandal as Clinton’s leaked emails haunted her and Trump’s offenses against minorities and women, including the infamous “grab ’em by the pussy” tape, stacked up.

If Clinton had pulled off the victory, she would have become the first woman to be elected president in the history of the country. She had endorsements from Jay Z, Beyonce, Pusha T, Kodak Black and Chance The Rapper. Hov led a rally in the swing state of Ohio last week, but it wasn’t enough for the former Secretary of State to capture the key state as no Republican president has been elected without winning the Buckeye state.

Despite his popularity, many Hip Hop artists took a harsh stance against Trump. YG’s “Fuck Donald Trump” went viral and to continue his campaign, the Compton rapper had fans beat up a Trump piñata at a concert and offered free donuts to those who voted in his hometown. Others to join with anti-Trump sentiments included T.I., Ice Cube and 50 Cent.

Killer Mike said he didn’t vote for either candidate.

Trump, who will officially take the office in January, follows President Barack Obama who was beloved by the Hip Hop community. Chance The Rapper and Frank Ocean attended his last state dinner and, to end his presidency on a high note, Obama hosted a BET party at the White House that featured a playlist of De La Soul, Jill Scott Common, Mobb Deep, among others.

Watch President Elect Trump’s victory speech down below and don’t forget, Kanye West is running in 2020.