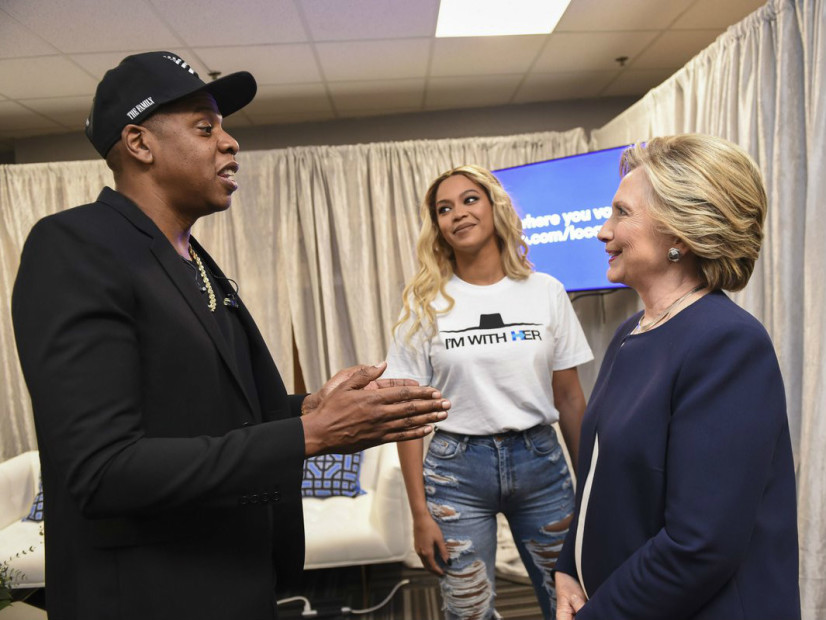 Jay Z and Beyonce pulled out all the stops as they rallied the youth for presidential candidate Hillary Clinton at an all-star concert in Cleveland last night (November 4).

Hov brought out J. Cole, Big Sean and Chance The Rapper to show their support for the Democratic nominee as she prepares to face Republican hopeful Donald Trump on Election Day (November 8).

Beyonce tossed her hat in the ring for Hillary by detailing the historic impact of having the first woman president following President Barack Obama as the first black man to hold the position of commander in chief.

“Eight years ago, I was so inspired to know that my nephew, a young black child, could grow up knowing his dreams could be realized by witnessing a black president in office,” she says. “And now, we have the opportunity to create more change. I want my daughter to grow up seeing a woman lead our country and know that her possibilities are limitless. We have to think about the futures of our daughters, our sons and vote for someone who cares for them as much as we do and that is why I’m with her.”

In his introduction for Clinton, Jay explained why the former Secretary of State is the superior choice to Trump, who has been despised by the Hip Hop community.

“I don’t have any ill-will towards him, but his conversation is divisive … so he cannot be my president. He cannot be our president. Once you divide us, you weaken us. We are stronger together,” Jay says as he welcomes Hillary with the assistance of an excited air horn.

After hugging Mr. and Mrs. Carter, Hillary shares her own vision of continuing a line of social activism that dates back to the civil rights era by citing Jigga’s “My President” remix.

“Rosa Parks sat so Martin Luther could walk and Martin Luther walked so Barack Obama could run and Barack Obama ran so all the children could fly,” she says to a roaring crowd. “Well, we have unfinished business to do, more barriers to break, and with your help, a glass ceiling to crack once and for all.”

Ohio is a swing state that generally has no specific political allegiance. No candidate has ever become president without winning The Buckeye State and the rally was a strategy for Clinton to hopefully capture that victory.

The festivities grabbed the front page slot on The New York Times with a photo of Beyonce, Clinton and Jay Z and the headline “Her Final Lap On High Road Often Muddy.” Clinton has the support of many rappers, including Pusha T and Kanye West. But she hasn’t convinced everyone. Clinton is still ired by her notorious “super preditors” speech and her quesitioned role in Benghazi as well as an email scandal that Killer Mike helped spread awareness about through a clothing campaign.

But she’s got Hov’s endorsement.

The front page of The New York Times, Nov. 5, 2016 pic.twitter.com/jqstjvHjAk

"We have to vote. The world looks to us as a progressive country that leads change." —@Beyonce https://t.co/3TKJ4H68Kz pic.twitter.com/KXL4PTOGxQ

"Thanks to Jay Z and Beyoncé. And thanks to Chance the Rapper and J Cole and Big Sean… this is what America is, my friends." –Clinton