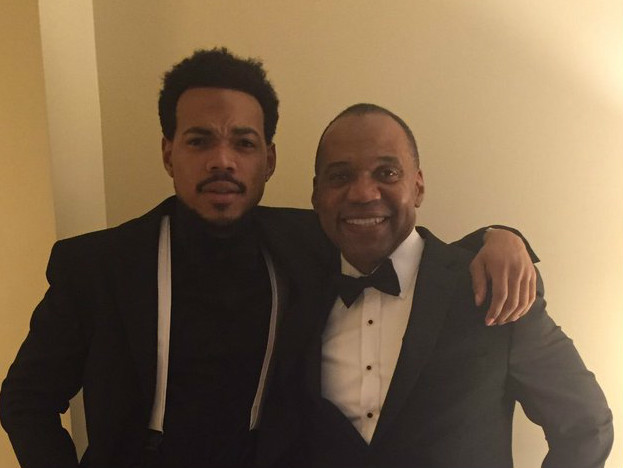 Chance The Rapper and Frank Ocean made an appearance at President Barack Obama’s final state dinner before the White House changes hands in January 2017.

Both men paid respect to their upbringings by inviting a parent to be their guest at the prestigious dinner. Chance brought his dad and Ocean brought his mom.

Speaking on Twitter, Chance thanked his father, saying: “Thanks Dad for raising me right. Look at us all fancy for the White House. I ain’t even wearing a hat tonight #BlackBoyJoy”

The Chicago sensation made the post with a photo of himself and his father, Ken Williams-Bennett, who used to work for Barack Obama when he was a Senator in Illinois.

Thanks Dad for raising me right. Look at us all fancy for the White House. I ain't even wearing a hat tonight #BlackBoyJoy pic.twitter.com/cCnHJL9EFP

Speaking to ABC, Chance said “I hope there’s some dancing, there’s some good music played…. The recurring dance battle that me and the President have had going on for a few years.”

When pressed as to who was winning said battle, Chance replied very earnestly, “I’m very high in the polls.”

It has also been reported that Chance will return to the White House later on this year to perform at the Christmas Tree lighting ceremony.

Stars descend on the White House for final state dinner hosted by the Obamas. https://t.co/UQ3SpOotag pic.twitter.com/nUG5omrXsp

Ocean, on the other hand, brought his mother, Katonya Breaux Riley, as his date for the special night.

The Blonde singer was asked about his choice of attire for the night when one observant reporter noticed that he was wearing classic black-and-white checkered Vans slip-on shoes.

“You wear Vans to a state dinner?” she asks.

Ocean casually brushed the question aside, saying “My first time doing it. Probably because it’s my first time here.”