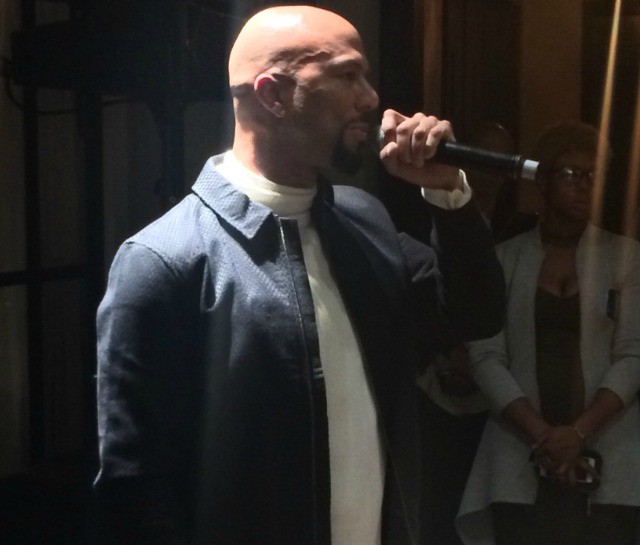 New York City, NY – Much about Hip Hop has changed since Chicago legend Common Sense broke onto the scene in the early ’90s, his playful-yet-introspective sound captivating audiences from coast to coast. Yet even as boom-bap came and went, replaced by a slew of other subgenres, one thing has remained: the problems facing the nation’s African-American population.

On Thursday evening, just days after the latest shooting of Alfred Olango, an unarmed black male who was gunned down right outside of San Diego in El Cajon, CA. The outspoken critic of violence welcomed a handful of attendees to preview his forthcoming album Black America Again at the high-end jewelry boutique Material Good located in SoHo, New York. Set for release on November 4th, the album, which features a host of artists including Bilal, Robert Glasper, Marsha Ambrosius, BJ The Chicago Kid and Syd Tha Kyd of The Internet, is as simultaneously hard-hitting as the issues clouding Chicago’s south and west sides, and as versatile and resilient as the city itself.

“I haven’t been this inspired since J Dilla passed. I got inspired to be an artist again,” Common told the crowd, citing his current muses as Kendrick Lamar and the musical Hamilton before letting the songs speak for themselves.

A follow up to 2014’s Nobody’s Smiling, which heavily focused on the troubles facing Chicago, Black America Again sees Common showcase his lyrical prowess overtop beats by Karriem Riggins, the Detroit producer who serves as the album’s main beat maker. The album’s backdrop ranges from gritty to melodic, at one point featuring jazz flute, allowing Common to work through the pain of recent events and attempt to look towards a brighter future.

With the album’s title track (featuring none other than Stevie Wonder) released as a single last week alongside an accompanying music video containing graphic footage of the Alton Sterling incident, other songs like “Little Chicago Boy” — which speaks to his father’s death in 2014 — and “Pyramids” had their cover art elegantly unveiled on a long wooden table in the center of the room, the surrounding party matching Common’s suave demeanor, and at times his new music as well.

As much a student of the game as ever, the 44-year-old is still interested in today’s up-and-coming artists, musing over Kaytranada and Hip Hop’s rising stars. Unlike the wavy, synth-filled 99.9%, Black America Again is rooted in scratching, ’90s-inspired vocals and instrumentals, a nod to Common’s earlier days. A number of soulful love songs add to the vintage Common vibe, speaking to a world in desperate need of positivity and giving listeners what is sure to be one of many must-hear albums this fall.