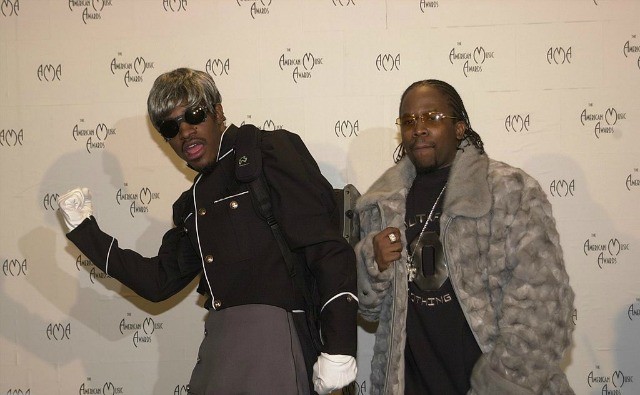 As we told you earlier today, the history of rappers dressing effeminate — even those who can be considered legendary — isn’t a new concept.

Erykah Badu is obviously up on this thought process and after seeing the album cover for Young Thug a.k.a. “Jeffery’s” new project, it provoked memories of her longtime friend, and baby daddy, Possum Aloysius Jenkins a.k.a. Dookie Blossum a.k.a. Andre 3000.

“Amazing Thugger,” she wrote on Twitter while sharing the No, My Name is Jeffery album cover.

“Reminds me of a certain ATLien I know.”

Amazing Thugger.
Reminds me of a certain ATLien I know. pic.twitter.com/fmy9WBVa5v

Although the sensationalist nature of the tweet obviously garnered more that 100% more attention that her regular social media updates, fans should know better to pin unsolicited shade-throwing on the earthly soul singer.

Longtime Outkast fans, especially on the eve of the 20th anniversary of their championed sophomore album ATLiens, can harken back to the eclectic lyricist’s fashion transitions and trends over the years. As his rhymes became more layered with double entendres and poignant anecdotes from angles never seen from an MC that side of the Mason-Dixon line, his choice of attire attracted more focal conversations and some would even call it a distraction to the group’s overall musical mission.

On the aforementioned ATLiens album cover, which many critics say rank in the top five rap album artworks ever created in terms of originality for its comic book mock-up atop a neon green visage, Dre sported a turban — a sharp left detour from the baggy Atlanta Braves jerseys and club-forbidden sweat pants he rocked on the group’s landmark Southernplayalisticadillacmuzik debut a couple years prior. On their legacy-solidifying third LP, Aquemini, Andre — now sans his government last name and having adopted the tag “3000” — rapped on the album’s opener “Return of the gangsta thanks ta’/them niggas that get the wrong impression of expression/Then the question is Big Boi what’s up with Andre?/Is he in a cult? Is he on drugs? Is he gay?/When y’all gon’ break up? When y’all gon’ wake up?” as he now was comfortable stepping out in public wearing football pads and furry yeti pants.

By the early 2000s, even Big Boi couldn’t predict what his partner would arrive on the scene wearing, as it ranged from blonde wigs to vintage 1970s garb to modern-day dapper man poster star. Just like fans today can’t predict with Thugger.

Take a look at some flicks of Andre 3000 over the years down below. History tends to repeat itself while evolving at the same time, no?