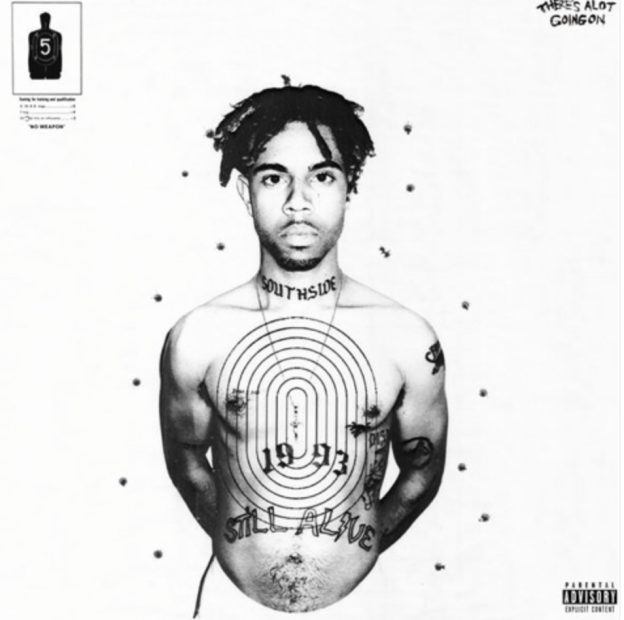 Vic Mensa’s first full-length project in three years is aptly titled; the man has a lot on his mind. He packs in just seven songs what many rappers would take twice as long to say. Such brevity is both a blessing and a curse to There’s Alot Going On.

When you’ve been in between projects for so long, making an entrance should be nothing short of a requirement. “Dynasty” accomplishes that, as the Roc Nation signee proclaims “the Roc is still alive throw your diamonds up again.” The Chicagoan also indicates changing winds in his city’s Hip Hop scene: “Then Chief Keef dropped in 2012, now it’s a drill/I was waitin’ in the wing like a bird on a windowsill/Now I’m the Fresh Prince, I think I know how my uncle feel [Phil]/He sent this dope shit to my veins like fiends on any deal/After we build on existing structures, shift the culture.”

Culture is burning on Vic’s mind, in ways that encapsulate but transcend Hip Hop. “Dynasty” transitions into “16 Shots,” which is nearly six minutes of righteous fury over political and police injustice in Chicago, namely the killing of 17-year-old Laquan McDonald by Chicago police officer Jason Van Dyke in 2014. Mensa infuses the track with rage, but it’s a controlled rage that pumps the cut with purpose. “The mayor lying saying he didn’t see the video footage/And everybody want to know where the truth at/On the south side where it’s no trauma centers, but the most trauma/A lot of cannons but you don’t want no drama,” he spits.

His laments aren’t limited to Chicago. He paints the grim struggles of Flint, Michigan, on “Shades of Blue”: “Color of morning pee coming out of the sink/It’s 2016 who would think/Kids in America don’t have clean water to drink.” Mensa takes a struggles that most Americans only hear or read about via news outlets and brings them across in vivid detail. The result is never boring and always powerful. To be fair, Mensa doesn’t let himself off the hook, admitting, “Here I am talking about a revolution/And I can’t even spend a dollar on the movement/When I’m in the strip club spending dollars on that movement/I guess we all got room for improvement.”

Even without lines like the aforementioned considered, Mensa sounds out of place rapping hardcore boasts and flossing over a ho-hum trap beats on “Danger” and “New Bae.” The former is ruined by Mensa’s poor singing on the hook, while the latter features some strong rhymes but is overall forgettable. These two songs, smack dab in the middle of the EP, stick out more than they would on a skimpy project with little wiggle room for error. The sing-songy flow and guitar make “Liquor Locker” a delight but its cirrhosis-inducing subject matter comes off as forced on a political heavy EP.

Fortunately, most of the music – namely the production — is impressive but wisely takes a backseat to Mensa’s musings. The beautifully elegant piano keys on “Shades of Blue” do exactly what they’re supposed to do; accent. The same can be said for the subdued backdrop of “Dynasty” and the powerful but minimalistic production on “16 Shots.”

It all comes to a head on the finale and title track, where Vic soars on a simple, inspirational beat, detailing his drug addiction, personal issues, and label politics that led up to this release. The cringe-worthy crooning notwithstanding, this song is an emotional, musical, and lyrical triumph, capped with where Mensa is now: “Wrote my wrongs all in this song now I’d like to welcome y’all to my season.”

With this EP in consideration, it will be interesting to see what a “Mensa season” sounds like. Though the few missteps are more glaring because of its conciseness, There’s Alot Going On is still a sturdy product of an artist looking both inward and outward for inspiration.