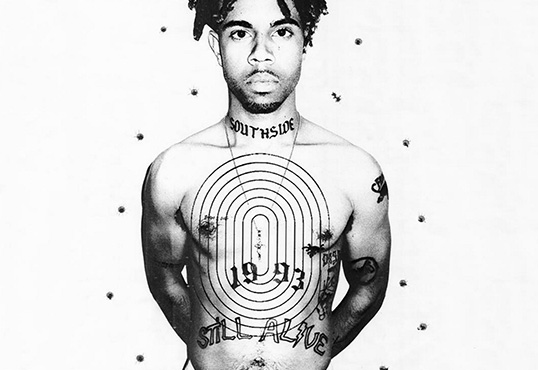 Vic Mensa unleashed the There’s Alot Going On EP today (June 3) to give fans an appetizer for his Traffic album.

The Chicago rapper has seven songs on There’s Alot Going On and enlists Ty Dolla $ign on “Liquor Locker.”

Mensa addresses his signing to Roc Nation on “Dynasty” and creates an anti-police anthem with “16 Shots.”

This is the 22-year-old’s first long-form project since 2013’s Innanetape.

In anticipation of There’s Alot Going On, his first full-length release since 2013’s Innanetape, Vic Mensa released the tracklist for the project today (June 2).

There’s Alot Going On is set to be made up of seven tracks. Ty Dolla $ign is featured on “Liquor Locker.”

Papi Beatz, who crafted the beat for “Danger,” handles the production on the project. He enlists Smoko Ono for assistance on two tracks.

There is still no announced release date for There’s Alot Going On.

View Vic Mensa’s tracklist for There’s Alot Going On below:

Some recent social posts indicate that he’s got more music on the way.

On May 31, the Chicago MC revealed what seems to be cover art for a project called “There’s Alot Going On” (that’s his spelling, not ours). So far, there’s been no clarification as to whether this is an LP or another in the series of singles and collaborations that’ve kept him busy lately.

Last week, he posted a photo of himself literally at the drawing board, seemingly dividing songs between an album and a mixtape. The “tape” column features tracks called “Liquor Locker” and “New Bae,” while the “album” tracklist is blurred out (although the Beyoncé-approved song “Rage” seems to be the first pick).  The caption told his followers to mark their calendars for #savemoneysummer, but didn’t provide any specific release dates.

Details are still scant on the new projects, but several publications are speculating on a June 3 release date for “There’s Alot Going On” because of a reference on the Playstation blog (of all places…). That particular blog post featured the title alongside TGOD Mafia‘s upcoming release (also set for June 3), but the mention to Mensa’s project has now been scrubbed from the site.

So mark your calendar, but maybe use pencil instead of pen for this one.