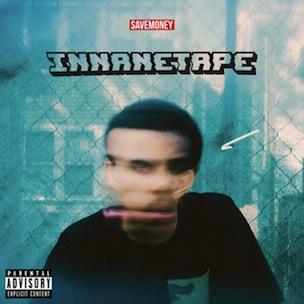 For better or worse, the Internet has changed the mixtape game. It’s ravaged our attention spans, swelled our cultural palates and induced a pressing sense of immediacy that’s spawned as many throwaways as it has classics. Projects are released through booster sites, songs are titled with hashtags, and collaborations are patched together through wi-fi connections and direct messages. The days of Kid Capri, Doo Wop and even DJ Quik have to be Googled at this point.

Vic Mensa’s “INNANETAPE” isn’t a tape about the Internet so much as it’s one that mimics or even reappraises it. It’s frenetic, dissident and impeccably self-aware. And it’s tough to find a more fitting liaison between the Digital Age and Hip Hop than Vic Mensa—who at 19-years-old has already seen his best friend Chance The Rapper blow up through the virality of “Acid Rap,” had labels in a bidding war after the success of his band Kids These Days, and wards off the critics that claim he’s already missed his window. Vic embodies the speed and eclecticism of the Internet, and on “INNANETAPE,” he browses subject matter without missing a beat.

“INNANETAPE” begins with “Welcome To INNANET,” a breakneck, lyrically dexterous statement that has Vic musing over his childhood, hometown and the sudden ascent of his SaveMoney crew. Like Chance, Vic’s style is based in non-sequiturs and tongue-twisting randomness, but here he trades innocence and goofiness for fiercer punches.

“Tippin’ the metropolitan axis in which I exist, it’s a trip to imagine / Imagine that which I inflict when I flip on the beat / I’m an artist, no need for a canvas,” he raps as he invites you to “tune into his frequency.” Good luck keeping up.

“Tweakin” has Vic mixing oddball elements of Pharcyde with the jocular violence of Eminem. He imagines Ray Jay and Chris Brown on “Celebrity Deathmatch,” Martha Stewart cookin’ yola and yelling, “free Sandusky” at Penn State in two head-spinning verses, then interpolates Cypress Hill and Meth and Redman to close things out. Like surfing the web, Vic Mensa pools together name-drops from every corner of the cultural spectrum. But it’s far from gimmicky; each line hits with the type of brooding disdain that has people fawning over Nothing Was The Same.

The hunger prevails throughout the album, but not every song is angry. “Orange Soda,” “Lovely Day” and “Magic” show Vic going back to his Kids These Days style, with weed-addled flows and self-questioning over lush live instrumentation. The Chance apery is unavoidable, but Mensa more than holds his own with strong imagery and versatile themes.

“Time is Money” has Vic tackling the institutionalized issues of his home city in a way few have this year, and it results in perhaps the tape’s most memorable track, with the following:

“Tryin’ to be optimistic with the politicians / Cut schools, buy guns, but when the shots is lickin’ at the ones that’ll lose they son / Instead they send ‘em to private schools and pull back on public funds / While functioning as if they could begin to fathom where they fuck we comin’ from…” Mensa leaves the listener thinking, and a solid Rockie Fresh verse adds to one of the most pointed songs coming out of Chicago in 2013.

Such intense introspection continues on “Holy Holy,” where Vic imagines how his obituary would read beside a grievous guest spot from Ab-Soul, and “Fear & Doubt,” where he muses over murder and suicide. Even the jumpy “Run!” with Thundercat features self-conscious lyricism, and it’s here where Vic has more replay value than just about anything you’ll add to your download queue.

There’s no ceiling on Vic Mensa’s crossover ability. Those who log on to his “INNANET” in search of diversion and socializing will be satisfied with the free form lyricism and upbeat tempo of the project’s first half, and those looking for something that runs deeper than the established culture will be thrilled with the latter half. “The pressure of my name could probably make a levee sink,” he raps on “YNSP.” It holds up quite admirably on this one.