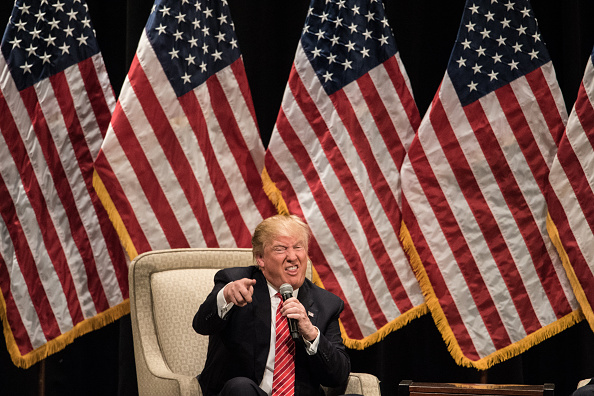 Surface level wise, the Republican party has historically represented everything wrong in politics for the Hip Hop community. Sure, there are a few exceptions. N.W.A. frontman Eazy-E made news when he visited a George H.W. Bush-occupied White House and Malik Yusef openly admitted to voting for the 41st president’s son several years later. However, a genre artistically run by young liberal minded minorities has reserved staunch connections to Democrats. Even rappers supporting the Donkey Party are semi divided on which candidate they want for the general election. If there’s one thing the culture wholeheartedly doesn’t believe in, it’s Donald Trump possibly becoming United States President. Within the recent weeks, everyone from Mac Miller to T.I. have given their opinions on The Apprentice’s former host. Attitudes from many within the rap game reflect displeasure with Trump and his antics. As a refresher, here are five examples below proving why the guy who wants to “Make America Great Again” falls on deaf ears. Well, that’s unless one is Azealia Banks or Chingy. But, let’s be frank, their opinions don’t matter much.

@Dailyrapfacts @Younglionking7 all good bro, we'll send you a box of Dreamville gear on us. Be safe out there.

Following the chaotic scene of a Chicago Trump rally being canceled after protesters shut shit down Debo style, things didn’t go well in Dayton, Ohio either. The 22-year-old Wright State University senior got manhandled by Secret Service agents after attempting to bumrush the stage as the pale faced candidate spoke to an eager crowd of supporters. His only real complaint about the situation? His Dreamville shirt bought during an Atlanta stop for J. Cole’s Dollar And A Dream Tour got ripped. In response, label president Ibrahim Hamad offered new gear and words of encouragement. Ironically, all of this happens as Jermaine earned a noticeable co-sign from President Obama during the same weekend at SXSW in Austin, TX.

#TrumpRally protesters chant "We gonna be alright" after announcement of a Trump no-show. pic.twitter.com/FXce08oWzI

“Alright” is the unofficial theme chant for Black Lives Matter and possibly this generation’s “We Shall Overcome.” It’s hopeful, catchy, easily to learn sans verses and got a cool contemporary bounce. Kendrick Lamar’s To Pimp a Butterfly single is one of the rare joints in Hip Hop reaching past pop culture into legitimate social movements. Since its release,”Alright” has been used during anti-police protest and The Million Man March anniversary. Thousands of anti-Trump protestors disrupting a rally and chanting “We gon be alright,” in the Chicago streets couldn’t have been a better proving point.

Who would have thought that Mac Miller’s mortal enemy would be the man who inspired the biggest solo hit of his career? Maybe attempting to sue an artist for using one’s name in a song has that effect on people. While Macklemore fumbles somewhat in Whitesplaining post-2014 Grammys, Miller has done a great job explaining his views on race and class without trying too hard. For those out of the loop, the term Whitesplaining describes white people’s ability to explain their racial privilege either to their own people or other minorities. In round two against Trump, he visited The Nightly Show to deliver a devastating speech after posting some tweets that could now only be called a warm-up. Miller even went so far as to translate the “Make America Great Again” campaign slogan to “Make America White Again.”

Besides Killer Mike, Democratic presidential nominee Bernie Sander’s biggest supporter in rap is none other than BasedGod himself. Yes, Lil B may be known for his sometimes inaudible stream-of-conscious rhymes that rarely make sense but that doesn’t diminish his more positive and socially conscious songs that actually reflect his social media output. For the most part, he’s more motivational than DJ Khaled’s Snapchat. Lil B’s stance also goes all the way back to 2011 when Trump threatened to run in 2012.

Like I wud vote for jerry springer and obama president before sarah palin and donald trump, with trump and palin I dnt feel a connec – Lil B

Donald trump running for president show u just how fucked up america is and how much money makes people go, fuck money love people – Lil B

Fast forward to the present, Lil B is riding hard for the Vermont Senator and taking shots at Trump’s racists rhetoric regarding immigration. Here’s hoping BasedGod can translate his curse that allegedly cost NBA Championships into someone more useful. If Trump gets too far in this race, it could come sooner than later.

Donald trump got applauded for calling Rosie o Donnell a fat slob on Fox News which she is not and the crowd clapped! Favoritism I c – Lil B

Future turned “If Young Metro don’t trust you, I’m gon shoot you” from one of rap’s greatest producer tags in recent memory to one of the best memes 2016 has so far. For members of the #FutureHive, getting the Atlanta producer’s assurance means everything. Though Metro Boomin hasn’t officially spoken about his distrust of Trump, he’s lent support through social media of those using the line.

they turnt up in Chicago today

One of the first MCs to send lyrical shots to Trump was Game on Documentary 2.5 track “El Chapo” featuring Skrillex. “This is doomsday, I can have Guadalupe / come through and knock Donald Trump out his toupee / Now look at his brains all on the sidewalk / And tuck the .38 and jump on my skywalker,” is probably the boldest attack of the nominee on wax to date. (Looks like someone was a little po’ed by the Mexican “rapist” comment.) Game is a West Coast fixture representing Compton, a city with Latinos representing literally half of the population. Last year’s popularity of drug lord El Chapo made him a legend in Hip Hop alongside Pablo Escobar and Freeway Rick Ross. Though black and brown relationships can always be better, the commonality as minorities is normally a unifier.