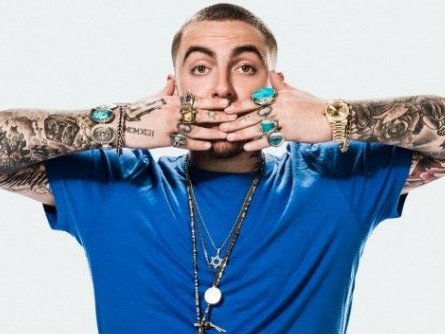 In a quotable-filled monologue on “The Nightly Show With Larry Wilmore,” Pittsburgh rapper Mac Miller lashed out at presidential candidate, Donald Trump. Miller, who once released a record titled “Donald Trump,” opened up his speech by boldly declaring, “I fuckin’ hate you, Donald Trump.”

From there, Miller unleashed a hefty amount of vitriol aimed directly at Trump. He recalled controversial comments Trump made about Muslims, Mexicans, and African-Americans, and later questioned if Trump’s ultimate goal is to “make America white again.”

“I only have one thing to say,” Mac Miller said. “I fuckin’ hate you, Donald Trump. So, you wanted to sue me. But then you realized you can’t sue somebody just for being super-talented and incredibly good-looking. You say you want to make America great again, but we all know what that really means. Ban Muslims. Mexicans are rapists. Black lives don’t matter. Make America great again? I think you want to make American white again. So, I come here today as a white man with the hope that maybe you’ll listen to me. In other words, let me white-splain this to you, you racist son of a bitch.”

Miller credited Trump for “lowering the bar for our nation’s intelligence,” and rousing the interest of hate groups, including the KKK.

“You’re lowering the bar for our nation’s intelligence,” he said. “You’re only goal is to stay in the spotlight no matter how much it fuels the fire of hate groups…You have people at your rallies who openly assault black teenage girls because ‘Hey, that’s American.’ The messed up thing is I really don’t even know if you’re evil. I think you’re just such an egomaniacal-attention-thirsty-psychophathic-power-hungry-delusional-waste-of-skin-and-bones, that you’ll do, say, or allow anything if it means you’ll just get one more minute in the limelight.”

Mac Miller’s monologue on Donald Trump, can be viewed below.