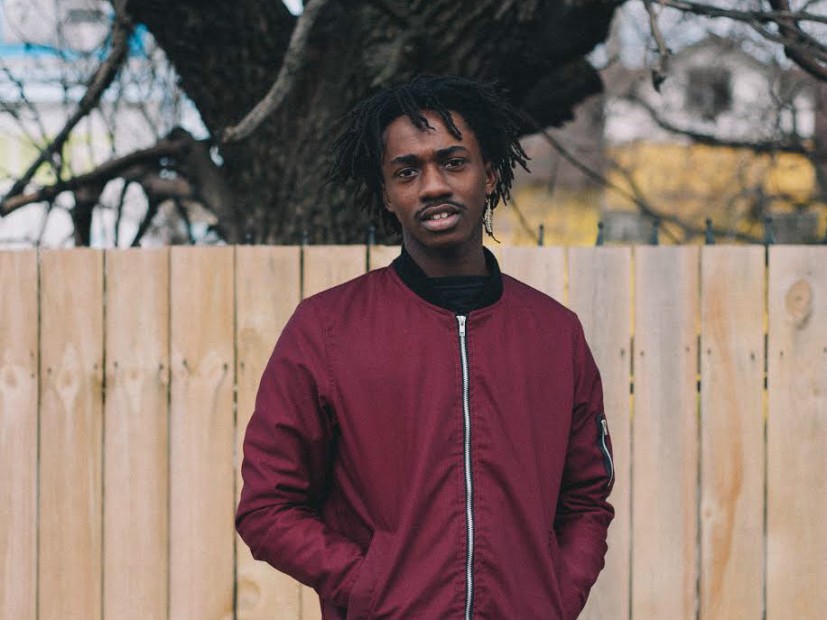 The Illinois Primary today (March 15) offers a chance for the citizens of Chicago to bring their voices from the streets to the ballots. This comes days after a group of protestors forced presidential candidate Donald Trump to cancel a speaking engagement at the University of Illinois Chicago on Friday (March 11). The business mogul has caused tension for people across the country with statements that people have deemed racist, and that pressure was evident in the Windy City when Trump decided not to appear in front of thousands of supporters.

Chicago rapper Ric Wilson was among those who protested Trump’s appearance in his hometown. Wilson says that stopping Trump is just the beginning to solving America’s problems.

“There are problems beyond him and before him,” he says in an exclusive interview with HipHopDX. “What he’s doing is he’s basically just taking that sheet off the KKK and kind of giving them a face and a voice on a mass scale. On a scale like a damn near president. What a lot of white racist folks and folks love about him is that he says everything that they can’t say at work or else they’ll get fired. That’s why I think it’s important that we do target Trump, but also important that we understand that it’s bigger than him. It’s beyond him. The fact that there are people fucking are going to come to a rally for a presidential candidate and it’s Trump, those folks and what they represent are initially the end of the problem in America and the problem that Black and Brown folks and poor folks have in America. They’re the problem. The poor folks and Brown folks are not the problem.”

Wilson is a member of various organizations including MoveOn, the Black Youth Project 100 and We Charge Genocide, a group that spoke to the United Nations in Geneva Switzerland about police brutality in Chicago. He says that a group of UIC students were the first ones to hear of the presidential candidate’s appearance at the campus. They started a petition and got approximately 5,000 signatures from people asking Trump’s event at the school to be cancelled. When the event was still ongoing, the people planned to protest.

The protestors rallied from inside and outside Trump’s event. A group of them barricaded routes to I-90 while other people held signs and chanted on the campus.

“I don’t know if his security felt surrounded,” Wilson suggests, “so they wouldn’t be able to get him out, which probably would have happened, so they sort of just shut it down.”

When the news broke that Trump cancelled his appearance, the crowd celebrated. A variety of chants broke out, including “We Stopped Trump” and the chorus from Kendrick Lamar’s “Alright” off To Pimp a Butterfly. Wilson was also on the scene when a group of people in Cleveland, Ohio chanted the Compton, California rapper’s song after they confronted a police officer trying to arrest a 14-year-old boy. At the time, Wilson called “Alright” the modern-day “We Shall Overcome.”

“People were pointing out the fact that the police were being super fucking racist,” Wilson says of Cleveland. “So we’re gonna be alright, the Kendrick Lamar song really fit.”

#TrumpRally protesters chant "We gonna be alright" after announcement of a Trump no-show. pic.twitter.com/FXce08oWzI

However, in Chicago, the people were celebrating more than a victory over racism.

“Some folks were thinking, we’re gonna be alright, but that wasn’t the initial chant,” he says. …“There’s a lot of different chants because not only is Trump like racist, but he’s every phobia that you can possibly think of and all the supporters have every phobia. They represent a powerful group of people that run a lot of stuff in the United States that are every phobia you can think of racist, sexist, homophobes, transphobes, all of that.”

While the people were celebrating, Trump and others expressed concern that the freedom promised by the United States Constitution was being compromised. One criticism of the protests was that by shutting down the event, the crowd was infringing on Trump and his supporters’ First Amendment rights to free speech and peaceful assembly. Wilson denies that he and his fellow protestors violated any rights.

“The first amendment disallows the government from infringing on the individual’s right to free speech so where that document doesn’t guarantee you can talk all the shit you want without intervention from other individuals,” he says, referencing a friend’s blog post.

The organized group of people, many of them thugs, who shut down our First Amendment rights in Chicago, have totally energized America!

Wilson points out that it was ultimately Trump’s decision to not appear at the event and he still had the free will to speak to his supporters.

“Trump was the one to say he didn’t want to come,” he says. “He was scared of us. We were telling him don’t come out, but shit, he still had the free will to come out and he could come out.”

The rapper continues by saying that in reality, he and many other minorities feel like they have been prevented the enjoyment of their First Amendment rights and are now finally finding the freedom to speak out against the injustices they see.

“We’re forced to listen and we’re forced to conform ourselves to society,” he says. “It’s interesting when folks say we aren’t listening ‘cause we’ve been listening our whole fucking lives. Actually, if we don’t listen, we’ll fucking die. We’ve been trying to get folks to listen for a long time. That’s why we had different tactics with barricades and shit and we have to make people listen to us almost. And I think we did that Friday, so that was successful.”

The Protest Goes Beyond Donald Trump

Wilson says that he is happy the people got their voice on a national platform as the news of the protest spread quickly. What Wilson is not so pleased about is the projection that the protesters were inciting violence. He says the protestors did not come with the intention to create violence, but they were aware of previous instances of violence at other Trump rallies. He knows of three protestors who were arrested by police Friday (news reports say five were taken into custody) but finds it frustrating that most of the aggression was started by Trump supporters.

“Even though they were the ones initiating the violence, the police escorted them out and the police arrested three of our people….” Wilson explains. “It’s very interesting to me that that happened. Not that they didn’t try to stop it, but it’s like dang, they really make it very clear who they protect, who the police get to protect.”

A friend of Wilson’s shares her experience with the violent supporters after it was announced that Trump was not going to appear at the event.

“Once they announced Trump wasn’t coming, supporters of Trump mostly White men started yanking at protesters and spitting racial slurs out,” she says. “In my over 40 years I’ve never felt so hated for the color of my skin. With police supporting the Trump supporters that were attacking protestors, it felt like we were trapped inside the pavilion, which at one point made it very, very scary.”

Wilson says that Trump was not the only target of the protests, but State Attorney Anita Alvarez is also said to be at fault for many of the injustices against Black people in Chicago. Protestors held signs and chanted “Bye, Anita” based on the “Bye, Felicia” line from Ice Cube’s Friday film.

“Anita Alvarez has to get out of office ‘cause we just really don’t like her,” Wilson says, saying that she is responsible for the cover-up of the death of Laquan McDonald. Footage of the 17-year-old’s death was withheld for a year before police officer Jason Van Dyke was charged with first-degree murder for shooting him. “And she just does not like us because of our skin color and because of what we do.”

Wilson says Alvarez is responsible for more injustices, including handing felony charges to some of the protestors who were arrested.

He also points to the deaths of Dominique Franklin, Rekia Boyd and others as evidence of a systemic problem that goes beyond any one individual leader. Wilson hopes that the people who came to make their voice heard Friday will continue to join him in moving America forward.

Wilson is continuing to make music after the release of his The Sun Was Out EP at the end of 2015. From the beginning of his music career, he has labeled himself not only as a rapper, but as an abolitionist and insists that standing up for justice is just as important as talking about current issues on the mic. Wilson will continue his musical journey Friday (March 18) when he performs with Public Enemy at Metro to celebrate the 16th anniversary of Chicago’s Louder Than a Bomb poetry festival.