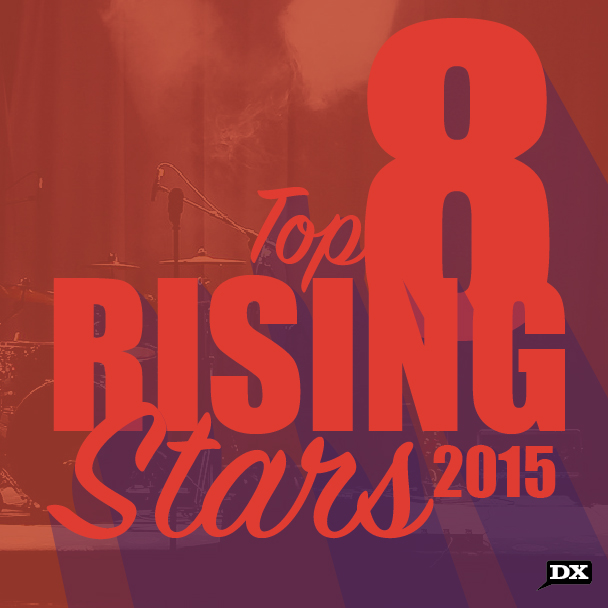 What exactly is a “Rising Star?” It’s an artist who comes out of nowhere because of a project or a moment but doesn’t achieve runaway success a la Fetty Vandross. There’s a narrow lane, now, for the person bubbling an inch below the surface but they are there and now there are more of them than ever. Jadakiss said it best when he said the digital takeover is leading to more and more folks being unknown and paid, and that thought contains a sliver of truth. These artists don’t want to be just paid, though. They want the fame.

In a manner similar to Frank Ocean, Los Angeles’ Anderson .Paak emerged as not just a tortured soul-man, but moreso as the go-to R&B vocalist for rap’s most important albums, too. 2014 and 2015 saw .Paak release two EPs, an album and have upwards of 30 guest features. His work alongside LA-based production duo Blended Babies spawned an excellent eponymous EP, which attempted to navigate the space between .Paak as a soul crooner, lover man, and despondent son. However, it’s when .Paak’s tenor shone on Dr. Dre’s Compton album on singles “All in a Day’s Work,” “Issues,” “Deep Water,” “For the Love of Money,” “Animals,” and “Medicine Man” where his star grew greatest. Now bearing co-signs from the legendary Doctor, as well as artists like Game and Goldlink, plus producers from Tokimonsta to DJ Premier and more, it’s definitely a matter of when, not if .Paak will break through.

Compton’s back in the building. No, we’re not talking about Kendrick Lamar here. Rather, we’re talking about one of Lamar’s own favorite emcees, Boogie. Lamar’s fellow Compton native rode the success of Jahlil Beats-produced single “Oh My” to a crest of mainstream accolades. Boogie’s proven versatile so far in his career, working alongside rap-familiar EDM stalwarts like SBTRKT, too. Two mixtapes in and already signed to Interscope Records, the 25-year old rapper’s zero-to-hero status feels pretty much confirmed. Presumably, we’re either mixtape number three or a full-length major label album debut away from telling the next chapter of this swiftly moving story in 2016.

Nas’s cosign and support could easily be enough of a reason to care about Harlem’s Dave East. In a manner similar to other new era Harlemites like A$AP Rocky, his cadences and flows flipping and changing with excellence. On tracks like Hate Me Now mixtape single “Momma Workin’,” East is riding the snare like a true school New Yorker. On other productions like “KD,” he’s more laid into the snap of the groove, a more “Texas trill” flow being showcased. East’s building quite the following, and now at nine mixtapes into his career and with Hate Me Now featuring Nas, Pusha T and soul vocalist Mack Wilds, 2016’s promise of an album could finally yield a breakout hit.

With The Roots now safely ensconced in the annals of Late Night history, the position of hip-hop’s house band is up for grabs. Thankfully, Brooklyn’s Phony Ppl are cresting at the right time to comfortably slide into this most hallowed of positions. Yesterday’s Tomorrow was their groundbreaking 2015 release. However, for those familiar with the band since their 2011 Brooklyn warehouse party inception, “Why iii Love The Moon.” is their latest (and arguably greatest) hit single. Rock, funk, soul and rap commingle here and the interplay between the sounds is heavenly and strikes in equal measure at all spaces in the core of one’s being. Phony Ppl are more than a band, they’re a movement. More than a movement, they’re now a metaphorical snowball traveling downhill, gaining speed and fans at a tremendous clip.

For as much as Chicago was once the home of drill rappers like Chief Keef and Katie Got Bandz, it’s now also equally as renowned for chill rhyme spitters like Chance the Rapper and likely 2016 breakout star Towkio. 2014 saw his Hotchips and Chopstix not only grab the crown for humorous mixtape names, but also gain him blog love and industry cosigns. 2015’s follow up was .WAV Theory, which in turn featured the aforementioned Chance the Rapper on soulful, Lido-produced and piano-led single “Heaven Only Knows” was a master stroke. Kaytranada-produced singles “Involved” and “Reflection” also impressed, house-ready chillwave rap finally getting a voice that’s comfortable over its standout beats.

Barely old enough to drink, Brooklyn femcee DonMonique’s Thirst Trap EP definitely quenched the desires of rap fanatics looking for a greater diversity of options regarding women’s voices in the genre. “Pilates (Kendall, Kylie, Miley)” may sound like milquetoast snap rap, but it’s DonMonique’s confidence in the swagger offered via the vocals she’s reciting on the production that separates her from the pack. Somewhere between Aaliyah, A$AP Rocky, The So So Def Bass All-Stars’ albums and the entire Swishahouse Records discography lies DonMonique. While on the surface this seems to be a bizarre coupling, in approximating the core motivations of millennials worldwide, her sound and style are certainly noteworthy.

The latest member of Joey Bada$$’ Pro Era crew to shine is 20-year old Brooklynite Kirk Knight. The rapper/producer’s Late Knight Special debut album was released in October 2015 and featured a slew of fellow blog and underground-relevant yet little-known mainstream artists including Joey Bada$$, The Mind, Mick Jenkins, Noname Gypsy and Thundercat. If looking for the best example of just how irrelevant mainstream hype is for many artists, it may be here. Between Thundercat’s virtuoso guitar skills and the excellent double-time flows of both Knight and Noname Gypsy, a single like “Dead Friends” strikes a nerve. 500,000 SoundCloud clicks later, it’s keying a surge for the recording that’s major enough enough for Late Knight Special to place at number 10 on number 10 on Billboard’s Heatseekers Albums charts and to portend well for Knight’s future.

What do you get when you splice together a dedicated and grueling grind towards jumpstarting a career in Hip Hop? Generally, a whole lot of MP3s accompanied with a hope and a prayer. Yet, Futuristic saw all his efforts culminate to a full blown mission after he did the unthinkable when his intentional attempt at going viral actually went viral. In early 2015, he channeled his inner Steve Urkel and donned a nerd’s disguise to flash his lyrical aptitude for unsuspecting citizens in Compton. From there, the 22-year-old California transplant by way of Tempe, Arizona did the unthinkable once again: he transformed novelty into accessibility by fanning the flames with good music. He quickly followed up with a more streamlined version of his antics in “The Greatest,” which rose its way to more than 10 million views on YouTube. To cement his year of good fortune, Futuristic reunited with his longtime collaborator Devvon Terrell for the album, Coast to Coast, a twelve-track offering that should ring in even more accolades throughout 2016. Don’t call it a revenge of the nerds. His force has most definitely awakened.

The stage is set for RTJ to potentially deliver their magnum opus.

It's devoid of emotional depth.