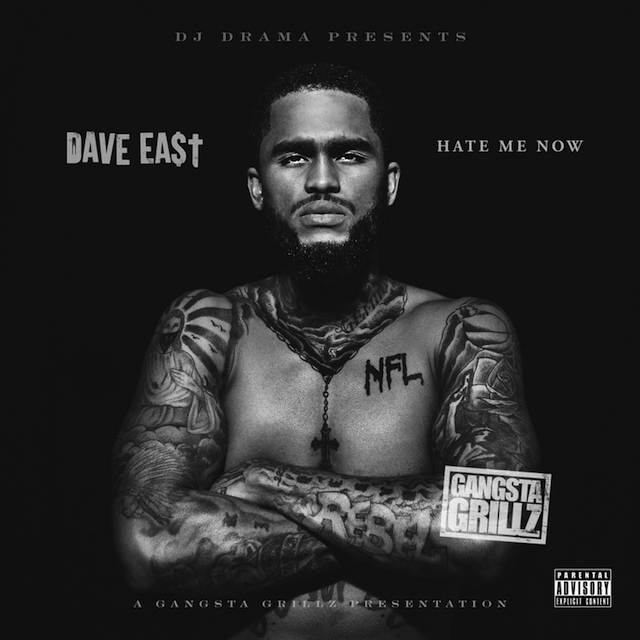 As respect for New York’s edgy and innovative Rap legacy increasingly dwindles within its five boroughs (let alone the rest of the country), Dave East stands as a remnant of Harlem’s pre-gentrified grit. Since hitting his stride with last year’s Black Rose, he has become a hopeful prospect for a city recently riding the wave of short-term viral hits including  Bobby Shmurda’s “Hot Nigga”, “Run Ricky Run” by Manolo Rose and the latest Milly Rock dance craze. Having catapulted ahead of the race with a world of competitors vying for his small piece of the spotlight, Hate Me Now attempts to capitalize on Dave East’s buzz and secure his place.

Perhaps overly ambitious at a time when his target demographic is drawn to simplicity, Dave East risks isolation by spitting with slick and descriptive aggression.  Menacing as he’s ever sounded, the opener “Call My Coach” sets the tone for Hate Me Now: a project determined to prove the Big Apple’s still worthy of mass consideration. Although Hip Hop’s most popular sounds have evolved, Dave adapts accordingly without sacrificing much in the way of authenticity and integrity. As proof he has studied the game closely, he puts trap flows to use on “KD” and even succeeds with autotune melodies on the robotic “It’s Time.”  Combining his unique style with multiple other influences, he’s able to set himself from apart from anyone creating within strict confines.

Far more intricate than the average emcee of today’s ADD generation, here, Dave East is out to prove he can hold his own alongside long established heavy hitters. As fans await a follow up to 2012’s stellar Life Is Good, Nas takes a moment on the cinematic “Forbes List” to celebrate his progress that East surely looks up to. Pusha T’s less than memorable appearance on the coolly lavish “I Cant Complain” is fixed by “Arizona,” a vintage street banger where Styles P all but passes the torch giving his stamp of approval to the young newcomer. The Lox veteran doubles back with his long-term comrade Jadakiss on “Everything Lit,” a moment that is sure to please their core audience, but ultimately sounds like nothing special. Dave East’s dependence on these unnecessary cosigns distract from the fact that he’s potent enough to carry himself.

Hailing from NY’s famous uptown, Dave East is, clearly, most influenced by hardcore Hip Hop with a razor-sharp edge to it. The oddly titled “No Coachella For Me” has him painting a stark contrast between himself and artists who are able to attend the popular music festival as he’s stuck dealing with law enforcement. Delving further into the abyss, “Streets Aint The Same” presents a realism hardly conveyed in present day songs as he tells his story without an inkling of false pretense. Though Dave East lacks remorse throughout Hate Me Now, the coldhearted “Numb” evokes sympathy as he recalls loved ones who are departed and locked up. This manages to bring just a hint of balance to the mixtape that is otherwise full of thuggish bravado without regard for his inner conflict.

Still sounding like he’s from the Northeast in 2015, Dave East forces his foot in the door as an unapologetic anomaly. Though he’s guilty of glorifying crime and some of his regional references may go missed, he serves as an exciting alternative to a traditional sound that is all but heading toward a niche designation. With the winter approaching, Hate Me Now is a fitting soundtrack successfully branding Dave as a convincing storyteller with the potential to become a star.