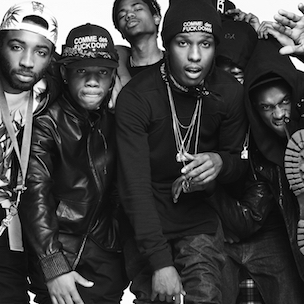 Sprawled out on a couch upstairs and away from the madness about to take place below, the A$AP Mob family lounge around, change clothes, and rush through their set piece. They’ve got a lot on their mind. On the precipice of complete domination after A$AP Rocky’s Long. Live. A$AP and A$AP Ferg’s infectious “Shabba” cooked up by Snugsworth, the crew seemed to cancel their group project L.O.R.D out of nowhere.

Of course, the guys have not been resting on their laurels. A$AP Rocky has been showing out on guest verses like on Shy Glizzy’s “Awwsome Remix” with 2 Chainz and his own joints like “Multiply” featuring Juicy J. Ferg’s got his Ferg Forever mixtape out in the streets and the single “Perfume” pouring out of car windows somewhere with abundant amounts of concrete. But the 22 man collective begun by A$AP Yams, Bari and Illz is still one of the hottest collectives in Hip Hop right now. And, as Rocky states, it’s not just music that defines the crew. They’re all into all other sorts of side hustles, each culminating in pushing some kind of art.

Art was on the minds of the fellas as we caught them backstage just before they went on as they talk the resurrection of their group album ( L.O.R.D maybe?), the A$AP movement and how they feel about the state of Rap in 2014.

A$AP Ferg: I feel like every year is our year honestly. I mean, I wouldn’t want to go a year without it.

A$AP Ferg: I know so. That nigga’s just being nice. [Laughs]

DX: Ferg Forever just dropped and you got a bunch of K.R.I.T. on there, which is dope.

A$AP Ferg: I fuck with K.R.I.T. We got the last joint on there, “Lac Lac.” That’s one of my favorite songs.

DX: Is the mixtape setting up the album?

A$AP Ferg: It’s going do what it needs to do. I designed it to bridge the gap between Trap Lord and my next album. Because, you know, for two years I’ve been traveling, I realize that I only put two singles out, and my fucking style changed so much because I was exposed to so much. So I’m a little older now, and I got other things to talk about. So, basically the mixtape was designed to bridge the gap between Trap Lord and the new Ferg, whatever that’s going to be.

A$AP Twelvy Reveals A Group Project Is In The Works

DX: Is there a group project in the works, and what was it like to record together?

A$AP Twelvy: It was a crazy process because it’s like we did half in New York, and then half in LA. We was just on the grind because I remember Rocky was on the road heavy, Ferg was on the road heavy so it was just hard to get up with each other. So when we got together we just made a whole bunch of fire, and we can’t wait to put that out and just show motherfuckers we here and we’re not playing with nobody. It’s a target for everybody. Word. Thats a facto. Word.

DX: Coming for everybody?

How A$AP Mob Makes Money Off Their Brand

DX: No one’s selling albums right now but you guys seem to have a formula for making money in terms of touring and merch. What differentiates you guys in terms of the business side?

A$AP Rocky: I think we follow our own formula. For the most part we’re eclectic as individuals, each and every one of us. I feel like you can’t really build your own empire or leave behind a legacy by following someone else’s footsteps. [There’s] nothing wrong with being inspired by someone else, but nowadays once everybody sees something is working they all try to cook up and match that kind of formula. And, for us, I think we’re kind of original, and genuine for the most part and I think thats why a lot of people connect to it. It’s more of a captivating cult following than just a bunch of rap niggas trying to be celebrities.

DX: I was just about to about to bring that up, all of you guys have various different talents, and side hustles and things of that nature. Is it difficult to focus on music when you guys are interested in so many other things?

A$AP Ferg: Well i just feel like, naturally we all just come from different shit. Before A$AP Music, there was just A$AP Fashion, A$AP Art. A$AP Street, A$AP Hustlers like, A$AP Harlem, running around like, we weren’t really just on some music shit. This is what we do right now for work, and at work you have to concentrate to make good art, basically. But at the end of the day it’s not hard because I feel like all art circles back anyway. You have to have fashion to go with whatever you wear in your video, or you have to have the right music to play in your commercials or trailer or whatever for a movie. Everything circles back with one another, and we just capitalize off all of that shit because we know how to do all of that shit.

A$AP Rocky: You know back when Ferg and I were younger, Twelvy included, well everybody here… What Ferg forgot to mention was that no matter what we someway somehow manifested and incorporated our music into it. I remember when we were like 19 or some shit. I was in Alabama, [and] me and Ferg would be on the phone rapping over Gnarls Barkley beats and hitting up Yams and shit like that, and I get back up, come to you New York and then me and Twelvy trying to go to the Bronx and find studios anyway we could. Nast, we would found his ass somewhere and just rip shit. He would come [through and] do what he do, kill shit [and] leave. Even if we in the studios in the basements down on 32nd street, or even in the Bronx. It was always music. But what he was trying to say, if i could articulate? What he was trying to say is that it’s not just music that defines A$AP because it was our occupation and profession.

A$AP Ferg: Everything that motherfucker said.

What A$AP Rocky Thinks About The State Of Rap

DX: How do you feel about the state of rap right now?

A$AP Rocky: I don’t fuck with the state of Rap right now. I fuck with a couple of artists, but I hate these rap niggas right now to be honest.

A$AP Ferg: I don’t think any rappers want to be rappers.

A$AP Rocky: I think these rap niggas is just hustlers. Like, nobody treats or approaches their careers anymore as music or as art. Now It’s just a hustle. Thats how motherfuckers look at this shit. To each his own. If thats what makes you, you, It is what it is. But I think that got over populated now and that’s just the impression you got in Hip Hop now. Most niggas start out on the street. Back in the das they would tell you go to school, be a teacher, lawyer, or the president. For black men, it’s either a basketball player, crack seller, or rapper. Sometimes motherfuckers be all three. I know alot of niggas that know how to play ball, sell shit, and still rap. Straight up, and thats just not the mentality. We have to treat this shit like an artform because it’s the laughing stock. I say this all the time, I have this conversation with people all the time. Rap is no longer a musical genre. It’s either Hip-Pop or it’s motherfuckers just trying to hustle. Get your hustle on. To each his own.