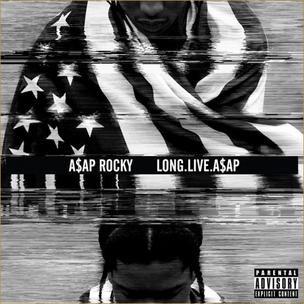 No matter what folks think of A$AP Rocky—not grimy enough for New York, not Southern enough for the South, too focused on weird fashion—the 24-year-old has music fans talking. After dropping the well-received mixtape LiveLoveA$AP in 2011, Rocky’s proper studio album debut LongLiveA$AP finally arrives (via leak to some) after a handful of delays.

The heavy and lumbering intro/title track serves as the tone-setter for this project—both in terms of sound and subject matter. Raps Rocky over booming bass and distant alien horns: “I thought I’d prolly die in prison, expensive taste in women / Ain’t have no pot to piss in, now my kitchen full of dishes / Nose bloody from that sniffin’, your heroin addiction / Trigger finger itchin’ fuck parental supervision … / Purple sippin’, finger twistin’, teeth glisten like it’s Memphis / A bunch of hypocritic Christians, the land of no religion.”

“Goldie” has been burning up the airwaves since the Spring, and the record still knocks. “PMW” is a toast to the finer things (read: the base desires of a young male), and is complemented nicely by ScHoolboy Q over production that can only be described as what a Drake record might sound like if Aubrey had some edge. Speaking of, Drizzy plus 2 Chainz and Kendrick Lamar come along for the ride on “Fuckin’ Problems,” which somehow succeeds despite a truly awful hook by 2 Chainz. It’s one of the album’s weaker tracks, for sure, but when 2 Chainz doesn’t ruin an entire track, chalk it up as a win.

“1 Train” is truly a must-listen as Rocky, Kendrick Lamar, Joey Bada$$, Yelawolf, Danny Brown, Action Bronson, and Big K.R.I.T. perfectly execute the cypher-style posse cut that’s largely been missing since the ‘90s. Each emcee comes correct, so don’t be surprised if you and your friends will all have different favorite verses. The cut is also a perfect example of Rocky’s refusal to be regional, as K.R.I.T.’s Southern drawl hits home just as well as Bronson’s gritty NYC flavor. “Fashion Killa” is a rare misstep as Rocky’s ambitions become a little too plastic and glossy, but LongLiveA$AP gets nicely grounded on “Phoenix,” with subdued production courtesy of Danger Mouse.

One spin of LongLiveA$AP, and it’s clear why A$AP Rocky didn’t break a sweat when the album leaked. Debuts this good just don’t come along very often, and it all comes down to the precocious Harlem rookie’s vision. He’s all over the place with the subject matter, but the topics are tied together by Rocky’s personality, which informs his genuine interest in waxing about them. The closest approximation in this respect is probably Dipset in its glory days. So the man born Rakim Mayers might not be the deft lyricist that his namesake is, but he’s more than adequate in that respect. Combine that with the fact that he might have the best ear for beats the game has seen since Game (who would have thought Hit-Boy, Skrillex, and Danger Mouse could coexist on an album?), and LongLiveA$AP will have fans clamoring for the sophomore set.