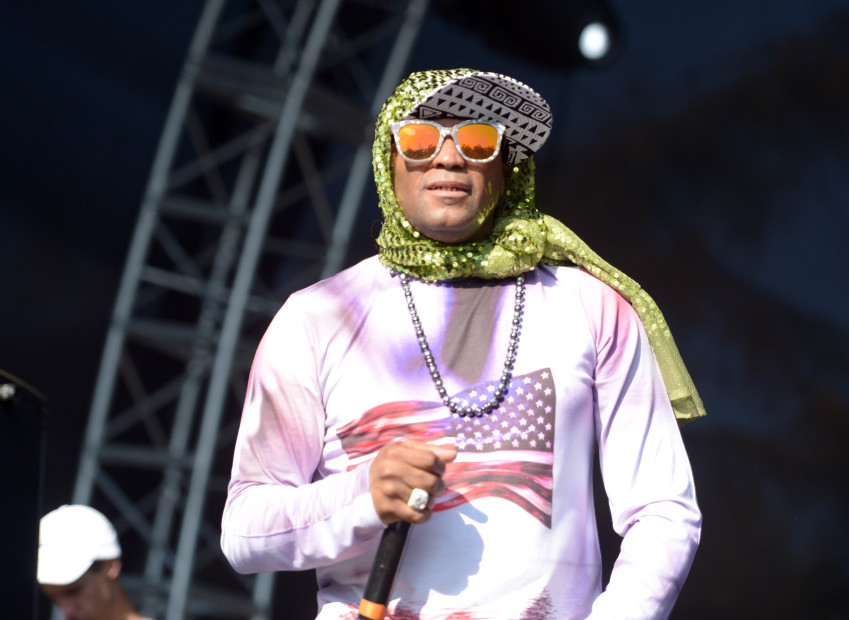 Collaborating last year with North Carolina-based producer L’Orange for Time? Astonishing! was a slick way for Kool Keith to evolve his sound while giving fans exactly what they expected. In reviewing the project last year for HipHopDX, contributor Dana Scott said, “As a solo artist, Keith has also pushed the envelope in rap by innovating the ‘concept album’ forward with his classic 1997 release, Dr. Octagonecologyst.”

Managing to reinvent himself yet again nearly a year later, Keith is back with Feature Magnetic. Entirely self-produced under the Number One Producer alias, the Mello Music Group release has him linking up with some of Hip Hop’s most respected lyricist on every track. This includes MF Doom, Mac Mall, Necro, Bumpy Knuckles, Sadat X, Ras Kass and a heap of others.

HipHopDX: Folks are really digging Feature Magnetic. I know you’re in a good mood at the moment, eh?

Kool Keith: It feels great. Yeah, I basically have a distinctive album production-wise. I just took over the whole production. I came out with a project that was special.

DX: The joint you did with MF Doom has been getting a lot of love lately as well.

DX: Especially fitting since last year Marvel Comics found inspiration from your Black Elvis/Lost in Space album. Has to be a good feeling.

DX: I’m assuming the main villains would be “cheesecake rappers.” How would you describe that type of rapper?

Kool Keith: Everyone who is commercial. They’re like cheesecake. Cheesecake is very commercial.

Why The Younger Generation Has Become Disrespectful To Hip Hop Legends

DX: There’s this whole controversy over the younger generation talking reckless about legends.

Kool Keith: That just means they don’t have an education. There’s no proper education. They don’t really know the knowledge or who is who. They don’t know any better. They’re saying anything that comes out of their mouth without any research. A lot of them think they’re good. They come from an era of non-learning. The learning process they have is so poor. You hear the songs they make? They’ll stay in the chorus for 19 bars and maybe rap for like one-and-a-half bars. That comes from improper upbringing.

Then there are the young mothers that bred these kids. They don’t really teach them anything. That’s an unattended home essentially. Schools and mothers that don’t teach their kids. It also comes in a form of jealousy. Plus, they think they know it all when they don’t know anything. They don’t know shit. Like you said, that’s what they call a rookie. That comes from not knowing what’s going on. Rap isn’t for everybody. Rap is for people who know they words and know wordplay. You can’t just rap. Rap is not easy. It’s not just about having a chorus for 19 bars.

DX: It’s a heavily lyrical guest list outside of MF Doom from Necro and Ras Kass. What was the goal direction-wise for Feature Magnetic in regards to features?

It’s all good, but now they have to see people with way bigger fan bases than them. When you have Atmosphere, Dirt Nasty, Ras Kass, Necro, Mac Mall and others, the secondary wish they were on that level. I’m not mad at the secondaries, though. They don’t know who they are. You fronting on me, but guys who are higher than you are on the album. That’s another thing with the misguidance again. Those guys thought they were doing something and didn’t know that the elites are out there. There goes to show the lack of experience in the music business.

DX: And, you sir have a lot of experience. A lot of people don’t make it to your time in the game. It’s been about a year since you dropped the Time? Astonishing! project with L’Orange.

Kool Keith: That project had good beats on it. The production was banging. It was an adjustment for me. Working with him was also great. Once again, it’s like me working with other great producers. Just me being professional.

“I Like Mello Music Group. I Like Them Because They Have A Real Good Ear For The Streets, Cultural Hip Hop & Cultural Movements”

DX: There are some clear differences in going from a rapper/producer-led project and handling both duties for Feature Magnetic as Number One Producer.

Kool Keith: It’s just a different kind of sound. L’Orange has a particular sound and I try to paint a picture over his music. When I do my own stuff, I know what I’m doing with my own stuff. It’s stuff I’m getting on anyway. Both of them are mild adjustments.

DX: The project was released on Mello Music Group who have released a ton of dope projects this year from Oddisee to Open Mike Eagle. As a label, it’s on a roll.

Kool Keith: I like Mello Music Group. I like them because they have a real good ear for the streets, cultural Hip Hop and cultural movements. They’re not based on any jibber jabber that’s happening. You have to be solid in your artform and distinctive to be on there. They’re not into anyone who is following everyone. They’re not trying to be trendy. They’re not into the ’90s normal Hip Hop. It’s just the real stuff basically. And, it’s artsy at the same time. It’s not watered down or trying to cater to radio. A lot of people on that label take their own vision and go with it. They’re not trying to do anything for the radio or highly commercial use. They get good coverage because everyone is original and natural on that label. It’s not like 90,000 people trying to go through one door.

DX: In May, Dr. Octagonecologyst turned 20 years old. The album is still a talking point in the Slept-On Rap Classic conversation.

Kool Keith: Octagon was the arising album for the music industry. It was a breaking point when rap was stuck on one thing. Everyone was stuck with champagne and silly records. When it came out, it broke a lot of laws and opened doors in all kinds of Hip Hop. Octagon broke rock, urban, experimental and four different doors. Everyone was stuck. It broke through five major doors. It was commercially successful without being commercial. It was a phenomenal album and world masterpiece. Everybody owns this album. I bet Prince owns this album. Michael Jackson probably has it. Quincy Jones and Pharrell probably own it. Dr. Dre probably has a copy. Timbaland probably has it. Who doesn’t have it or heard it. All the producers have it. It deserves an achievement because it’s been about what I’ve been doing my whole career which is break ground and law. That was an all well-produced record that’s stood the test of time.