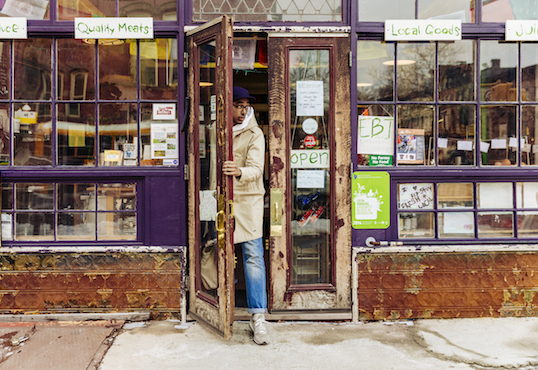 Out of the many debates floating around modern Hip Hop, there isn’t one that strikes a nerve with some like the quantity vs. quality debate. Some music listeners demand a constant stream of content, others don’t mind waiting for a significant length for something that stretches. The answer of right or wrong doesn’t matter when mixtapes like What a Time to be Alive can be made in a week, be a critical disappointment and still go platinum. Thankfully, Mello Music Group’s own Oddisee doesn’t have that problem at all which is pretty spectacular considering his role as both rapper and producer.

Following the acclaim last year’s The Good Fight received, he could have hung back and chilled for years before the next release. For 2016, not only did he drop the flat-out dope Alwasta EP, but an instrumental project The Odd Tape as well. And, he’s planning on releasing an album by the year’s end. Being a workhorse in Hip Hop nowadays sometimes means sacrificing long reaching music for instant gratification. Sitting down with HipHopDX before last weekend’s performance at Los Angeles’ El Rey, Oddisee explains his method of putting out material constantly and why he doesn’t mind people spitting over his instrumentals.

“For every record that I released, I was constantly evolving. With that evolution came my style.”

HipHopDX: Man, let me start the conversation on how dope The Odd Tape is.

Oddisee: Thanks man. The Odd Tape is out available and I’m super happy with it. It’s crazy to see a record be released in the world and people’s perception and how they listen to it. For me, it’s a little weird because the record is a little old for me. I turned the music into Mello Music February 2015. For it to come out now is like it reinvented itself for me.

DX: You’ve said in many interviews that you started off making beats because producers weren’t sending them to you fast enough. How exactly were you able to find your own sound while continuing to put out music at the pace you’ve been known for?

Oddisee: I think me finding my own sound and the pace in which I release music is kind of one in the same. For every record that I released, I was constantly evolving. With that evolution came my style. It took other people to listen to my music to tell me that I had a signature sound. I didn’t notice it at first. With every release, I learn a little bit more about myself. Through those releases, I feel like I developed my sound.

DX: What’s the process of taking your various productions on record and placing that into a live show?

Oddisee: For me, I don’t see Hip Hop as beats and rhymes. I see it as music. What you do in the studio, I personally feel you should be able to do on stage. If you notice on my records, there isn’t a use of ad-libs because I want to make sure whatever I perform in the studio, I can actually say live. I do my best to practice it on the recorded verses to make sure whatever it is I’m saying can be brought on stage.

DX: The Good Fight was a favorite at the DXHQ last year with it winning our Underrated Album Award. Looking back over a year since it’s release, how do you feel about that project now?

Oddisee: I love all my projects. The Good Fight was a great record for me because it was made in a special circumstance. I produced that record and turned it into Mello Music in like two months. Normally, I write my rhymes outside and I wrote that album within the four walls of my studio. It was a very inward album for me as most of the time, I have more of an outward look. For my inner thoughts to be received so well, I appreciate it.

DX: Between The Good Fight, The Apollo Brown project, even Big Pooh’s albums and others, Mello Music Group has been on a roll. What’s your take on your current label home at the moment?

Oddisee: It feels great to be a part of the quality and quantity that Mello Music releases. The thing I appreciate the most about the label is its multifaceted nature. All of the artists have room to breathe and their own different lanes. Mello Music is able to pull them all together and put a supportive fan base behind them which is something that’s really difficult to do. Mello Music understands how to do that.

Alwasta Was Made In A Week & Stretched Is Social Currency

DX: Do you know what fans expect from you at this point in your career?

Oddisee: Fans expect preservation and progression simultaneously from an Oddisee record. You listen to my records, there’s always this nostalgic feel, but it’s always something that sounds old, but it’s not old. I think people understand that more and more how that’s my signature.

DX: A lot of critics loved Alwasta and even called it more political this time around.

DX: What were the circumstances behind Alwasta?

Oddisee Alwasta happened before I went on tour. I found myself going on tour promoting a vocal performance, yet my next release was an instrumental album. How do I get people interested in a performance vocally when my next record is an instrumental record and my last vocal record was a year old? So, my manager and I decided to come out with an EP which I could release for free to help promote the tour. Once we realized when it needed to come out in order for it not to conflict with The Odd Tape, they gave me a week to record and produce the album. That’s how it happened. The whole thing came together in seven days.

Oddisee: That’s where the title came from. Alwasta means social currency in Arabic. I had enough social currency to call all my connects. My graphic design guy turned in the cover in less than 48 hours. I called my homie Bentley in Saudi Arabia and he’s a translator who translated the English to Arabic for me. He got it back to me in less than 24 hours. I called my keyboard player Ralph Real from Pittsburgh about an hour and a half away. I asked him to come down to record me in New York because I had seven songs I needed to be recorded in a day. I told him I could knock it out faster if he pressed the record button for me. He laced the tracks, recorded me. It was those people willing to be there for me at the drop of a dime that allowed that record to come together so quick.

DX: You’re really good at following through with concepts on albums. Where do you find the time to do that with each project?

DX: Not bad when we’re in an age where artists feel the need to record 100 tracks per album, but only end up using less than a quarter of that.

DX: You’ve done beats for Joey Bada$$, King Mez and Homeboy Sandman among others. When do you know it’s time to give a beat to someone else instead of tackling it on your own?

Oddisee: Being a producer/MC and figuring out which beats are for me or other artists are left to the beats. The beats normally tell me this one is for you. Most of the time, the beats that I’m crazy about or want to keep for myself, I’ll slide them in when I submit them to other artists and they never pick them. They always pick the ones I’m not interested in. It always works out that way.

DX: How do you feel about artists spitting over your instrumentals?

Oddisee: I can’t stop people from recording to my instrumental albums. I remove myself, but as a result, I make myself completely neutral. I don’t engage with anybody who does stuff over my music because if I do, that’s opening pandora’s box. If I got on Twitter or Instagram and say, “Oh I like what you did with my track,” I’ll have like 80, 90, 100 songs coming at me. I can’t as much as I would love to. Some of them are actually dope, most of them aren’t. It’ll just open the floodgates and that’s why I ignore it.

DX: You have an album cooking up for the end of the year. Anything we should expect?

Oddisee: I’m just constantly thinking and creating. We were in the van from Las Vegas to Los Angeles and that was about four and a half hours. I was writing rhymes the entire time. I think about a theme first and then I detail that theme which becomes a blueprint. That allows me to work real fast.

DX: Something on your mind at the moment that’s shaping the theme?

Oddisee: The theme of the album that’s shaping up right now that’s been on my mind real heavy is the severe lack of critical thinking in the world. People don’t critically think anymore and it scares me. It scares me more than Trump or terrorism. Critical thinking is low and people take things too much at face value.

Oddisee’s The Odd Tape is currently available on iTunes and Bandcamp courtesy of Mello Music Group.