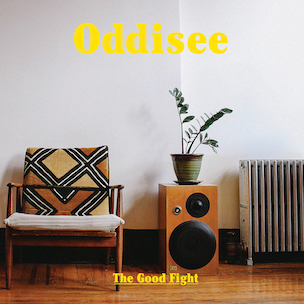 Carved into the ethos of the DMV-area emcee Oddisee is the spirit of something old. There’s the focus on lyricism, for one: The kind of straightforward talk that blows through trite gimmicks and bravado. The eclectic production constructs for another, as though Odd’ has finally managed to craft through all his influences (his father’s Sudan; the Washington D.C. of his youth). So after many-a-listen you can’t help but think Oddisee is an artist whose time has come, and you can’t help but think The Good Fight is an album whose unrushed happiness is the kind you wish for in your own life. There’s art and there’s understanding, yeah?

But, really, there’s also artifice and dread, and while Oddisee sometimes veers slightly off course into talk about what music is doing instead of letting his music speak for him, he more than makes up for these meanderings elsewhere. When he is rapping about his life or his mind (which is 99.9% of the time) the album is a brilliant turn of phrase. And The Good Fight has to mean all our fights. The one between loving a parent and knowing you’ll never be able to pay them back. To know, with deep fear, love and loathing, that you’ll never be able out sacrifice them, and you feel the deep imprint that leaves on your bones.

For the making of The Good Fight, Oddisee shut out all musical interference. This is a difficult thing, but like an actor going on an extreme diet to unnaturally slim down for a role, dedication is the womb of great art. So it goes, then, that the lava pit of anger lurking a fortnight under Amir Mohamed el Khalifa has been replaced by a certain contentment — calm that lingers over his new work. On “Want Something Done” he illustrates the trap of success endlessly repeated in different works of black art. If it’s not Kendrick having a debilitating case of success anxiety, it’s Bamboozled’ take on the absurdity of becoming part of a system that seems to despise you. He also reveals the calm spoken about earlier, letting the anger of having to do it all himself wash over him without chasing it to the detriment of his music. He starts the very next song featuring Maimouna Youseff with “I wanna make non-stop profit. l wanna make a non-profit” as he dives into the complicated miasma of modern choice. The concept of choice is also one of this album’s strong suits. It asks you a question over-and-over: Are you willing to sacrifice for your dreams?

Here’s something they don’t teach you in school: Dreaming is the most selfish thing a human can do. And, while you are doing it, the entire world will come to test the mettle of that dream. Oddisee didn’t give in, despite having been one-third of lowkey D.C super group Diamond District and still having to book his shows (his own European tour, mind you) on his own. With that in mind, The Good Fight becomes something a bit different. It’s the wake of one man’s journey to the acceptance of things. “That’s Love” is just that, dancing into and out of the ins-and-outs of love like the jazz rhythms buttressing the song. It is also the avoidance of the apathy trap; that place wherein you sacrifice joy for the cheap elixir of numbness. There are the tangible aspects of the album as well. The production is exquisite. A lush, cosmopolitan collection of sounds spread out and allowed to coalesce. The album is quiet, subtle and monastic. The boom-bap sections are more ruminations than anything else, and the soul stuff gives far more than it takes. Sure, songs like “Book Covers” are off center commentaries on what people shouldn’t do, breaking the overall rhythm of the album, and “Worse Before Better” is the kind of grime experiment better left off the table, but those mishandlings are rare enough that they fall out of your mind exactly when the beat breaks.

So, in a mature, jarring exposition on zeal, experimentation, life and truth, Odd’ connects the dots in his music with what’s happening both inside and outside of himself. With that a kind of alchemy, a kind of magic takes place, where an album extends beyond its borders into the wild, open air. What happens now is anyone’s guess for Oddisee, but with The Good Fight he seems to have reached a new level, and given us the blueprint on how we can do the same.