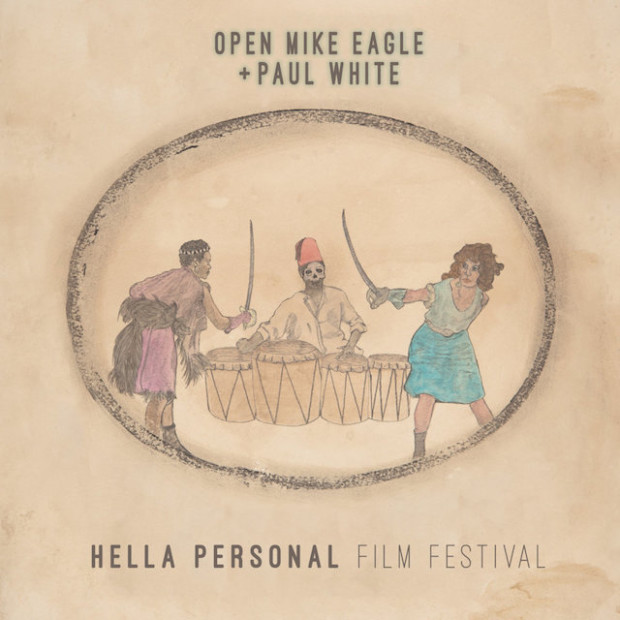 Since dedicating himself to trudging through the murky swampland where art and commerce tend to be at odds, (with the help of semi-prestigious boutique Mello Music Group) Open Mike Eagle’s profile has expanded exponentially. At it for years now, the success of 2014’s Dark Comedy catapulted the Project Blowed alum turned (now defunct) Hellfyre Club offshoot towards becoming somewhat of a counterculture staple. Finding a market for his on-record existential crises, Mike’s firm footing in the business of underground rap coincides with greater visibility not limited to television and an appearance on Marc Maron’s widely regarded “WTF” podcast. Striking while the iron is hot, Hella Personal Film Festival is Open Mike Eagle’s third release (counting a series of EPs) since his overdue arrival two years ago.

No stranger to introspection, Hella Personal Film Festival has Open Mike Eagle sticking to his playbook and sharing his feelings on the world around him from a number of perspectives. Known for operating from a place of vulnerability, aligning with unpredictable producer Paul White (who’s gained recognition for past work with the likes of Danny Brown and Homeboy Sandman) gives Mike the perfect theme music for his latest self-ascribed “art rap” showcase.

To start the project off, “Admitting the Endorphin Addiction” has Open Mike Eagle poetically singing about chasing the high of feeling inspired. Song ideas prove to be well sequenced as the triumphant “I Went Outside Today” follows. Using punchlines for illustrating each track’s concept (and poking fun at life’s absurdity) in lieu of inflating his own ego, here he celebrates being in good spirits saying “I’m tryna relive days that I couldn’t grab/I looked up what Lena Dunham said and I shouldn’t have.” Able to maintain momentum, he pushes the envelope doing verbal calisthenics on “Dang Is Invincible” as he describes the morning after “Drunk Dreaming” (which arrives nine songs later). Both songs detail the joy of a burrito, encountering a weird looking police officer and an allusion to Hellfyre Club’s mostly private dissolution, this callback being an example of why many consider Mike to be in a class of his own.

Though his resilience has paid off in spades, Open Mike Eagle continues to write from a place of emotional frailty to please those who expect it or because it’s the angle he knows best. His seemingly effortless knack for melody has made his music catchy over time, but this time around listeners have to work to grasp the futility and hopelessness of “A Short About a Guy That Dies Every Night.” One of the tools at his disposal is the ability to comment on race in a whimsical manner that’s rarely off-putting. A feat once again accomplished on “Smiling (Quirky Race Doc),” Mike seems just a bit annoyed having to explain how greater society respects him more on stage as an MC than as an African-American when he isn’t performing.

Hella Personal Film Festival succeeds on the merits of Paul White’s melodic beats setting the backdrop for Open Mike Eagle’s woes, aggravation and sighs of relief alike. Clever abstract lines like “If I was a font I would hate Times New Roman” suggest his feelings on being overlooked, but the primitive “Protectors of the Heat” only hinders his potential to reach the masses. Functioning best when processing life’s curveballs, on “Insecurity Part 2” he approaches the nervous excitement of fatherhood, wittily musing “Two guys and one lady, we damn near could be Black Eyed Peas.” This collection is as heavy, thoughtful and laborious as anything Mike Eagle has released to date, but luckily he’s reached a place where he can withstand indie Hip Hop’s glass ceiling.