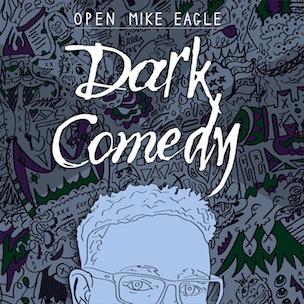 Mello Music Group’s newest recruit Open Mike Eagle is no Rap rookie. Known for establishing himself as a fixture at Los Angeles’ esteemed underground rap workshop Project Blowed after a post-college migration from Chicago, Mike’s been making music with Hellfyre Club since the imprint’s inception in 2011. Though Mike’s fourth solo album Dark Comedy album is only 13 tracks and clocks in at less than 45 minutes, it requires some heavy unpacking.

Each record is its own carefully crafted comedic sketch—thematically sound and filled to the brim with obscurities. While the rhymes are gritty and self-aware past the point of vulnerability, Mike isn’t afraid of coming across smarter and wittier than his average listener. His expansive vocabulary notwithstanding, he shines though a variety of esoteric references—with comedy, film, ‘90s television, and folklore all being recurring topics. In the first verse of the opening track, “Dark Comedy Morning Show,” he first prefaces the rest of the album with the disclaimer: “I’m bad at sarcasm so I work in absurdity,” then proceeds compare himself to Ace Ventura director Tom Shadyac and deadpan comedian Steven Wright. Backed by gorgeous production from Toy Light, it’s a fitting foundation supporting the contrasting components present throughout the album.

The juxtaposition begins immediately with the now year-old track “Qualifiers,” which many have argued is one of Mike’s best songs to date. Though it takes only 30 seconds for him to kick his melodic raps into double-time, all the while maintaining content consistency, humor, and pitch, it might be the most humble braggadocio ever attempted. “We the best, mostly…we the tightest, kinda,” is as close as Mike gets to flexing, instead asserting himself as “half black soap and half crack smoke,” an appropriate analogy for a psychology major raised on the south side of Chicago.

On the Cohen Beats-produced “Golden Age Raps,” he sarcastically proposes a new Rap “Golden Age,” presenting multiple possibilities for Rap success and business entrepreneurship in 2014. The fact that most of his hypotheticals are hysterically accurate (“if your Rap career ain’t hitting, you can rap over videos of kittens, it’s the golden age!”) affirms Mike’s acknowledgement of the very absurd place modern Rap falls within current Pop culture. Obscure ‘90s references aside, he recognizes that this is the chess board on which he must maneuver, though he seems more suited to “RPG, roll the die” as he mentions in “Qualifiers.” His imaginative wordplay as role-play seeks to draw in eclectic listeners as opposed to conquering Rap’s mainstays; that is to say, don’t expect to hear Mike drop a Kendrick “Control” verse or the equivalent any time soon. The track “Very Much Money (Ice King Dream)” is an ode to those who share his artistic outlook wrapped in an “Adventure Time” reference. Mike sings, “My friends are superheroes—none of us have very much money, though / That shit’s not valuable, come say it to my face,” taking a stand as the “president of the rappers that don’t condone date rape” (“Thirsty Ego Raps”).

After a hilarious guest verse from comedian Hannibal Buress on “Doug Stamper (Advice Raps),” the album begins turning dark, both sonically and lyrically. On “Jon Lovitz (Fantasy Booking Yarn),” Mike describes ideal touring conditions from the point of view of someone who’s likely encountered the worst conditions imaginable. “Idaho” finds Mike deliriously crooning from the drivers’ seat of a tour bus on a deserted interstate, probably between the hours of four and five in the morning. Although “Idaho” is a beautiful and powerful glance into the struggles of life on the road, its place within the album feels confusing. “A History of Modern Dance” and “Deathmate Black” get understandably weird, but still maintain humor—“the ego is the dirtiest of private parts / a spirit boner, never sit unless it’s six feet high…” (“Deathmate Black”). Kool A.D. joins Mike on “Informations,” a bizarre exaggeration of technology dependence, before he closes the album with the highly introspective “Big Pretty Bridges,” which, like “Idaho,” feels slightly out of place among the satirical majority.

Even with its melancholy closing, Dark Comedy is an incredibly fulfilling listen. From start to finish, the production is progressive and atmospheric, while lyrically, his wit and substance are matched by his honesty and introspection. The black curtain has been drawn, setting the stage for Open Mike Eagle to showcase his best performance yet.