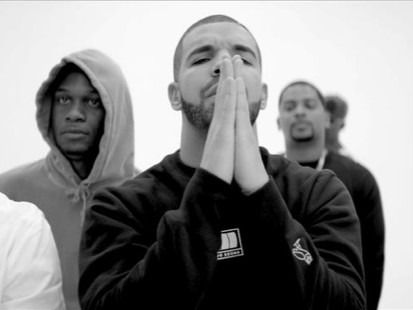 Drake’s VIEWS is now available for streaming and purchase. The project appears on iTunes and Apple Music prior to its debut on Beats 1 radio.

VIEWS is made up of 20 tracks and includes features from Rihanna, Future, Pimp C and dvsn.

With hours to go before the world premiere of VIEWS, Drake released the features for the album.

Drake created memes of the VIEWS album cover where he is photoshopped into pictures with each of the guest artists.

Future, PartyNextDoor, Wizkid, Pimp C, Rihanna, Popcaan and dvsn are all said to be on the 20-track project. Although none of the artists are attributed with tracks, Popcaan appeared on “Controlla” and the late Pimp C appeared on a leaked version of “Faithful.” Wizkid is on the single “One Dance.”

40 released the production credits. Most of the songs are crafted by him. Kanye West assists on “U With Me?” Boi-1da helps create two of the beats. Southside, Cardo and Young Exclusive team up with 40 on “Grammys.”

VIEWS is slated to premiere globally on Apple Music’s Beats 1 radio tonight at 10 p.m. EST. It is to be commercially released tomorrow (April 29) as an exclusive stream to Apple Music and for purchase on iTunes.

View Drake and 40’s Instagram posts announcing the features and production credits for VIEWS below:

Drake’s album is now officially titled VIEWS, no longer Views From the 6.

Noisey spoke with a representative from Universal Music Group who confirmed the shortened title.

The Toronto rapper released the tracklist and cover art with the social media tag “#VIEWS.” The project is slated to have 20 tracks. For the cover art, Drake is seated on the CN Tower.

VIEWS is set to premiere tonight (April 28) on Apple Music’s Beats 1 radio. It is to be commercially released tomorrow (April 29) as an Apple Music’s streaming exclusive and be available for purchase on iTunes.

Drake released the tracklist for his forthcoming Views From the 6 album today (April 27).

The project is said to be made up of 20 tracks with “Hotline Bling” listed as a bonus. “One Dance” and “Pop Style” are also on the list.

There are no listed features on Views From the 6, which is set to premiere on Beats 1 radio tomorrow (April 28) and release commercially Friday (April 29).

View Drake’s Views From the 6 tracklist below:

View Drake’s tweet revealing the Views From the 6 tracklist below:

Before he releases Views From the 6 for streaming and purchase, Drake is set to premiere the album on Apple Music’s Beats 1 radio with Zane Lowe tomorrow (April 28). Apple made the announcement for the “DRAKE GLOBAL LISTENING PARTY” on its tumblr page that the show will be airing at 10 p.m. EST/7 p.m. PST.

On Friday (April 29), the album is slated release to Apple Music for streaming and hit the iTunes store for purchase. The Toronto rapper announced his partnership with Apple in June.

Views From the 6 is said to have the singles “Pop Style,” “One Dance” and “Summer Sixteen” on it.

This is the follow-up to Drake’s If Youre Reading This Its Too Late, which was released as a mixtape. His last LP was 2013’s Nothing Was the Same.

With Views From the 6 days away from its release, Drake unveiled the album’s cover art on Instagram today (April 24).

“To the city I love and the people in it…Thank you for everything #VIEWS,” the Toronto rapper writes for the caption of the cover art, which shows Drake sitting on the CN Tower.

Views From the 6 is slated to release Friday (April 29) on Apple Music.

View Drake’s Views From the 6 cover art below:

After months of speculation, Drake has officially announced that Views From the 6 will be released April 29.

The Toronto rapper broke the news on his OVO Sound radio show, according to Billboard.

Views From the 6 is slated to be an Apple Music/iTunes exclusive on its drop day. Drake has a partnership with Apple and announced in June that he would release his next project through the platform’s Connect feature. He has already released the videos for “Energy” and “Hotline Bling” through Apple.

Drake has teased various release dates for his forthcoming LP. A promotional video from November said the album was coming in January. The 6 God  said on New Year’s that the project was “coming very soon.”

He released the singles “Pop Style” and “One Dance” this week.

Drake confirms Views From The 6 release date, via Instagram.

Although Drake didn’t share a specific release date for Views From The 6, the Toronto singer/rapper did announce that his much-anticipated project will in fact be released in April.

Yesterday (March 15), Drake uploaded a picture of a Views From The 6 billboard, and added the follow caption: “APRIL”

This week’s announcement comes months after Drake rapped about possibly dropping Views From The 6 in January, on his “30 for 30 Freestyle.”

“But just know it’ll be January in no time,” Drake rapped on “30 For 30 Freestyle,” which was released last November.

Although an updated released date for Views From The 6 was just released, details on the album have continuously been offered thanks to those who have lent their assistance on the project or have ties to Drake.

Earlier this month, ILOVEMAKONNEN spoke with Montreality about what he’s heard so far from Views From The 6.

“I don’t even know ’cause I hear so many songs and then they’ll be like, ‘It’s going on there,'” ILOVEMAKONNEN said, during the interview. “And then it’s like shit came out four months ago or something, so it’s like, ‘Oh.’ It’s gonna be definitely a good album, though. I’m nervous.”