Drake "Nothing Was The Same" Release Date, Cover Art & Tracklist

Drake has announced when he’ll be dropping his third studio album, and it seems as though the Toronto rapper is very excited about it.

Drizzy took to Twitter, where he announced that Nothing is the Same, his third studio album, is due in stores on September 17:

To commemorate the occasion, the YMCMB rapper directed fans to the newly-minted ovosound.com site:

Drake announced the Nothing Was the Same‘s title in February, shortly after debuting “Starting From the Bottom.” The announcement came the same night he won the Best Rap Album Grammy Award for Take Care. He has confirmed that Jhene Aiko will be on the project.

UPDATE: HitsDailyDouble.com reports that Drake’s third studio album, Nothing Was The Same is now releasing September 24. This is one week later than Drake’s tweets indicated in late June.

At OVOSound.com, Drizzy showed two versions of the artwork. It is unclear if they belong to standard and deluxe editions of the album, as has been done in recent months by Kendrick Lamar, J. Cole, The-Dream and Big Sean, or if it is an album with multiple covers, as has been the case with Kanye West’s My Beautiful Dark Twisted Fantasy or The Roots’ Things Fall Apart.

The artwork is below:

Other artists to include baby pictures and subsequently to-date images include Lil Wayne, Nas, The Notorious B.I.G., and Common.

UPDATE #3: Drake has revealed the tracklist for Nothing was the Same. The tracklist is as follows.

The deluxe version features two additional songs, “Come Thru” and the 2 Chainz and Big Sean-assisted “All Me.”

Drake revealed the tracklist with the following images. 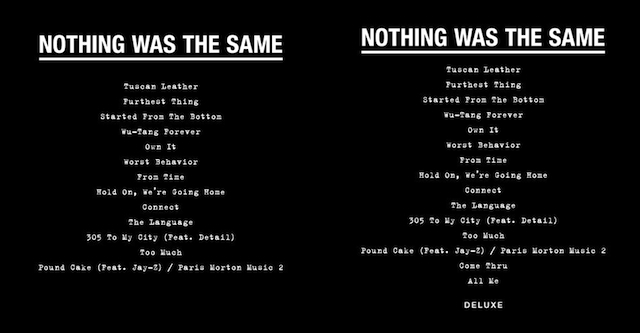 UPDATE #4: According to Amazon.co.uk, Jhene Aiko is slated to be a guest on “From Time,” a track off Nothing was the Same. Aiko was not on the original tracklist revealed by Drake.

UPDATE #5: Drake has revealed a short trailer for his Nothing was the Same album, set to be released September 24. The trailer can be viewed below.