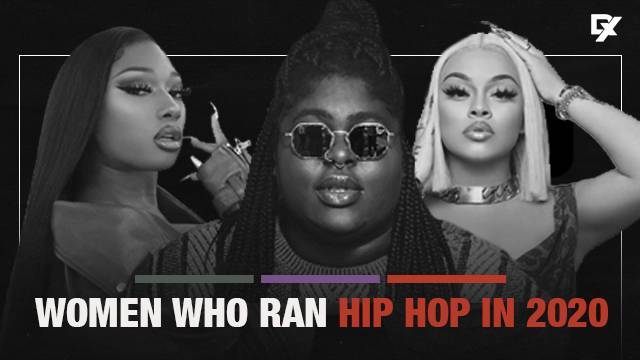 Women Of Hip Hop - The Best Female Rappers Of 2020

The COVID-19 pandemic led to the biggest shutdown the music industry has ever witnessed — no concerts or tours, venues closing left and right and artists wrestling with what to do next. But despite the grim reality the pandemic has shoved down our throats, an onslaught of music made its way to our ears thanks to the ample downtime quarantine provided.

Female rappers, in particular, rose to the occasion and there was no shortage of powerful women rhyming with fervor and precision in 2020. Not all of them were lyrical nerds per se — some simply impacted the rap space so boldly, they were impossible to ignore. Others wowed Hip Hop fans with their acute attention to detail in every bar they spit or their brash, no nonsense approach to their music — no matter how “offensive” it came across. From Megan Thee Stallion, Cardi B and Flo Milli to Tierra Whack, Chika and Rapsody, there was a little something for everyone’s tastes.

Simply put, Megan Thee Stallion made 2020 her bitch. The statuesque Houston native catapulted to the top of the Billboard Hot 100 with the “Savage (Remix)” featuring Beyoncé in April, won numerous 2020 BET Awards (including Female Rapper of The Year) in June, signed a lucrative contract with cosmetic giant Revlon in August, dropped her Roc Nation debut Good News in November and scooped up four Grammy Award nominations to cap off the year. With the exception of the “Savage (Remix),” she accomplished all of that and then some recovering from bullet wounds sustained in a July shooting. Now that’s savage.

Love her or hate her, Cardi B has fully made the transition from a loud, outspoken Love & Hip Hop: New York personality to bona fide pop star. And while she didn’t release an album this year, the fiery Bronx native did unleash perhaps one of the most talked about rap videos in recent memory — the one and only “WAP.”

With its overtly crass meaning and salacious visual, the song drew both praise and criticism but in true Cardi B fashion, she gave no fucks. Instead, she watched it settle in the No. 1 spot on the Billboard Hot 100, get certified platinum in less than a month and break numerous streaming records.

Cardi also became the first female rapper to be named Woman of the Year at the Billboard Women in Music Awards earlier this year, took home several ASCAP Rhythm & Soul Music Awards and won a One Billion Stream Award from Spotify for “I Like It,” Taki Taki” and “Girls Like You.”

Mulatto jumpstarted her career in 2016 when she won the first season of Jermaine Dupri’s rap competition show The Rap Game. Although the Atlanta native opted not to move forward with So So Def, she eventually found a home at RCA Records earlier this year, not long after her single “Bitch From Da Souf” started making waves. The song peaked No. 95 on the Billboard Hot 100 and was remixed by Saweetie and Trina. After dropping “No Hook” and “He Say She Say,” she teamed up with Gucci Mane in July for “Muwop.”

The following month, Mulatto made a cameo appearance in Cardi and Megan’s “WAP” video and was featured on NLE Choppa’s single “Make Em Say” the same day. In addition to being named HipHopDX’s Rookie of The Year and earning a nomination in the Best New Hip Hop Artist category at the 2020 BET Hip Hop Awards, she dropped her RCA Records debut Queen of Da Souf, which peaked at No. 44 on the Billboard 200. Other 2020 releases include Chloe x Halle remix and DX’s R&B Song of the Year “Do It” featuring Doja Cat and City Girls, “Down” with G-Eazy, “Sex Lies” and “Spend It.”

Flo Milli’s name has been popping up more and more these days. The Alabama native soared to notoriety in 2019 when her singles “Beef FloMix” and “In The Party” went viral on TikTok and hit No. 2 on Spotify’s Viral 50 in April 2019. After securing a deal with RCA Records, she dropped her major label debut Ho, Why Is You Here? in July and landed a BET Hip Hop Award nomination in the Best New Artist category in September. Known for her bubbly, versatile raps about relationships and her never-ending hustle, the 20-year-old has just begun carving her own lane.

Flo Milli’s fellow Alabama native Chika has gone from viral Instagram rapper to Warner Music Group signee in less than two years. After releasing her major label debut Industry Games in March, she wasn’t able to tour in support of the EP due to the raging COVID-19 pandemic but still found other ways to shine.

Not only did she make her acting debut in the Jamie Foxx-led Netflix film Project Power (which also featured one of her original songs), she also earned her first-ever Grammy Award nomination in the Best New Artist category, something she addressed on her latest single “Gold Medals.” With her innate singing talent and propensity for crafting fire bars, Chika is poised for a productive new year.

When it comes to top tier lyricists, Rapsody is always the cream that rises to the top. The Snow Hill, North Carolina-bred MC delivered her potent, highly intoxicating masterpiece EVE in 2019 and firmly established her place in the game, only to return with even more heat in 2020.

After opening up the 2020 BET Awards alongside Public Enemy, Nas, YG, and Enemy Radio MC Jahi for the “Fight The Power” remix, dropped the politically charged single “12 Problems” and won BET’s Lyricist Of The Year Award.

Tierra Whack made a splash in 2018 when she released the highly innovative album Whack World on Instagram, a 15-track burst of imagination comprised of one-minute songs custom fit for the social media giant. While she’s remained somewhat quiet since, Whack resurfaced in November with two new singles — “Peppers and Onions” and “feel good” — which she told Apple Music were her answers to the COVID-19 blues.

Showcasing top tier flows and clever lyricism, Whack once again reminded her fans what makes her so alluring. She also scored a spot in Apple’s holiday ad for the HomePod Mini, which has been airing all month.

As Griselda Records’ sole female artist, Armani Caesar has some big shoes to fill. But judging by her tenacity and fierceness on the mic, the Buffalo native is up for the challenge. After signing with the imprint in March, she dropped her first single “Simply Done” featuring Benny The Butcher and DJ Premier in August, putting her sharped-tongued rhyming prowess firmly on display. Fans are still waiting for her highly anticipated project The Liz, but they can get a little taste in the form of the video for “Palm Angels,” which arrived in September.

Noname is still kind of bubbling under the surface, but she flexed on J. Cole in June with “Song 33,” proving she has the skills and confidence to go up against the best of them. Two days after Cole appeared to target the Chicago rapper/activist with the polarizing single “Snow On Tha Bluff,” she wasted no time responding with the Madlib-produced track.

In the second verse, she reiterated her belief mainstream rappers aren’t using their platforms to speak about police brutality, racism and other social injustices — which is what caught Cole’s attention in the first place. In August, Noname hopped on the remix of Anderson .Paak’s “Lockdown” single with J.I.D and Jay Rock, once again showing off her sharp lyricism and unabashed wit.

Sa-Roc is the epitome of class and poise — but when she gets on the mic, she’ll rip anyone to shreds. As she explained in an interview with HipHopDX, people often mistake her for a singer and are blown away once she starts rhyming. The Roots’ Black Thought witnessed that first hand when he pulled her onstage at 2011’s A3C Festival and watched her kill her impromptu verse — acapella style.

In October, the Washington D.C. native dropped her 10th studio album and first for Rhymesayers, The Sharecropper’s Daughter, which found her swapping bars with Thought again, this time on “Black Renaissance.” Throughout the project, she effortlessly articulates some of her most personal feelings while simultaneously showing off her impeccable lyrical skills.

Rico Nasty’s aggressive, raw and in-your-face rapping style is almost jarring at first, but it soon becomes apparent just how passionate she is about her craft — and her wild persona. Her video for “OHFR?” is a particularly glaring example. Released in November, the black-and-white visual finds the Atlantic Records signee sporting a black mohawk, fishnet stockings, black lipstick and a black leather jacket as she swings around a Flying-V guitar. The video has racked up over 1.8 million YouTube views and served as the perfect precursor for her debut studio album Nightmare Vacation, which dropped in December.

Ms. Nasty also provided the original song “My Little Alien” to the soundtrack for the 2020 film Scoob! in May and her 2017 single “Smack a Bitch” was certified gold by the Recording Industry Association of America (RIAA) not long after. Rico’s music has been featured on the HBO television series Insecure as well. Other 2020 releases include a remix of “iPhone (Ookay)” and “Don’t Like Me” featuring Gucci Mane and Don Toliver.

Kamaiyah is one of the Bay Area’s most intriguing artist to emerge in the last few years, almost like a female version of Too $hort. Brash, confident and full of boss bars, the Oakland native emerged in 2016 with the critically acclaimed mixtape A Good Night In The Ghetto.

After signing with Interscope Records the same year, she hit a few bumps along the way but managed to land on her feet in 2020 with the release of not one but two new projects — Got It Made and Oakland Nights, a collaborative EP with fellow Bay Area artist Capolow. She also helms her own imprint GRND.WRK, intent on staying in the driver’s seat when it comes to her career.

The mysterious Leikeli47 has yet to reveal her face. Instead, she lurks behind a variety of different masks, bandanas or balaclavas, making her persona even that much more intriguing. Following the massive success of her single “Money” from 2017’s Wash & Set (which was featured in the 2019 film Little starring Regina Hall and Issa Rae), the RCA Records artist returned with Acrylic in 2018 but has been relatively quiet since.

Aside from a feature on Rapsody’s EVE album (“Oprah”), she has barely been heard from in the last couple of years, but that changed in August when she released an animated visual for “Zoom,” the lead single from her forthcoming album Shape Up. Showcasing her signature braggadoccious bars, the song was a good reminder of Leikeli’s knack for writing infectious hooks and hard verses.

On December 15, she unveiled the “How To Rob (Remix)” and dissed numerous artists in the industry, including Lil Baby, Megan Thee Stallion, Migos and Flo Milli. But as she noted on Twitter, it was “all love to all the rappers mentioned.”

Yung Baby Tate may not be on everyone’s radar yet, but the spunky 24-year-old is intent on changing that. This year alone, she secured a record deal with Issa Rae’s record label Raedio and released two singles from the Insecure TV soundtrack. In April, she teamed up with British singer/rapper Bree Runway for “Damn Daniel” and followed up with a video for the “Rainbow Cadillac” single, which comes from her EP After The Rain featuring 6LACK and Flo Milli.