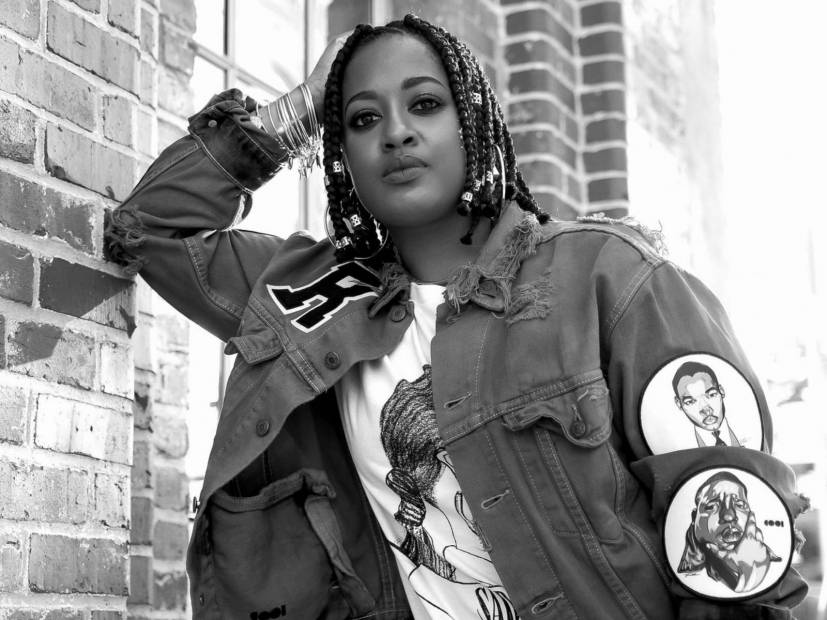 Courtesy Of The Martin Agency

It’s a lazy Sunday night. The television is on in the background when a familiar voice starts rapping about milkshakes, poké bowls, sushi and a plethora of other cuisines.

Although it’s not instantly clear whose voice it is, as the commercial moves along you suddenly realize it’s Grammy Award-nominated MC Rapsody spitting flames for Door Dash’s new “Every Flavor Welcome” campaign.

And that’s not all. Gift of Gab and Chief Xcel also lend their talents to another version of the ad that borrows heavily from the classic Blackalicious cut “Alphabet Aerobics,” which Gab explained was completely by design.

“They were fans and they said, ‘We have an idea,'” Gab stated to HipHopDX. “We want you to put a spin on ‘Alphabet Aerobics’ and promote about foods we deliver. It was quite easy. They wanted to do it. Of course, we we’re like, ‘Yeah, let’s do it. Door Dash!’ Hey, ‘Alphabet Aerobics’ seems to be the gift that continues to give. After all these years, we’re still getting deals off the song.”

Gab explained it didn’t take long to write. Door Dash, in collaboration with The Martin Agency, provided the foods he had to incorporate into his verses.

“It was great,” he said. “Good vibes. I’m glad I did the project. It’s always great to make a living doing what we love to do — and that’s making music. We did the ESPN thing two years ago and we’ve been featured in a Sprite commercial, Yahoo, et cetera, but this is the first one where we designed the rhyme for the commercial.”

He was moved by the campaign’s mission, explaining, “Anything that’s positive is a good sign and anything that’s negative is a bad sign. Anything you see that brings cultures together or unites or is positive in that aspect, I’m all for because we need it right now.

“There’s a lot of division that’s trying to be created right now. Food is really, really great. It’s great to see people travel and eat the foods of that culture there. That’s damn near like traveling itself. I’m all about that — taking in different cultures. I’ve been traveling the world since I was in my young 20s.”

Much like Gab, Rapsody was intrigued by the “Every Flavor Welcome” campaign’s concept.

“I was one of two people who were asked to do the spot,” Rap told DX. “What I liked about it was, there are several food delivery places, but what was special about Door Dash is they made their campaign all inclusive. The many flavors and styles of food we eat just represent the world. The campaign was really about diversity and celebrating all flavors of people, culture and food.

“I just thought it was really dope. I liked just the creativity of it — I saw how it moved and the language, and I just felt like, ‘Yo, this is just a really, really dope campaign.’ If I turned the T.V. on and I saw it, one, I would get hungry because it’s all kinds of food (laughs). Two, it’s catchy. Just the beat behind it that they use — I get people tweeting me like, ‘I think I just heard your voice and now I’m super hungry!’ It was just a dope campaign, but it was attached to something even doper.”

As Mahatma Gandhi once said, “Be the change you want to see in the world” and this felt like an opportune time for Rap to embrace that philosophy.

“The idea to be the change that you wanna see in the world, that is expected even in a commercial about delivering food,” she said. “You can have your voice heard to represent a bigger picture, a bigger cause, a bigger movement that’s going on at a time where we’re so big on different races, religion — it’s dope to see a part of what we has humans and what America in itself is supposed to stand for about being a place that is diverse and celebrate diversity. I definitely think it’s Door Dash’s way of being part of a bigger conversation. I think that’s dope.”

“It wasn’t really like I had to write bars,” she said. “They told me all the foods that were in the TV spot. They put the TV spot together first and Khrysis made the beat and when he sent me the beat, I just had to find a creative way to lend my voice to it and make it so it is different; put my inflections on it and my spin on how I say words and my energy and that makes it my own.

“That’s what I liked about it. I really got to play with my voice, especially at the end when it picks up. I had a lot of fun doing it. I did I don’t know how many takes. I’d try it all kinds of ways. I really stretched me to be creative. That’s something I can apply to my own music. Like, how many different ways can I stretch on different letters and words? I really had fun with it.”

Rap, who is currently on tour with B.I.G. Krit, just released her latest album EVE, while Blackalicious is putting the finishing touches on the upcoming Imani, Vol. 2.

Check out their Door Dash spots above.