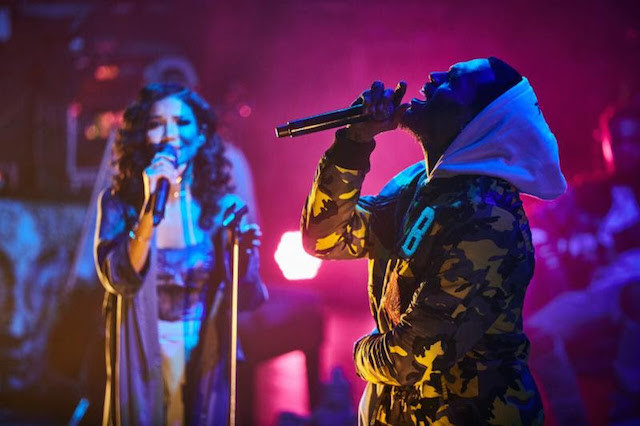 Pharrell on the flier? I’m down. My girl wanted to support her homies who threw this, so I tagged along. This was called Eggs Over The Neptunes. You can never go wrong with good music. This was free with RSVP, but many people were snoozing. I love how some (most) events can be all crazy with the guestlist and then you get there, and no one gives a fuck.

The wall walking into Lock & Key in Koreatown.

This was my first time at Lock & Key, a spot I’ve meant to hit in Los Angeles for a minute. I feel like a ton of my homies throw events here but I always somehow miss them. It’s a small bar located in Koreatown.

It was definitely a good time. Everyone’s energy was positive and people were turnt. It was a little bare; blame it on the rain. But you could tell the homies came out tonight. Shout out to the DJ playing Shawty Lo. He had everybody screaming “Big up, to all my haters.”

Are you ready? TONIGHT we are all the way LIVE @observatoryoc in Santa Ana for our 5 Year Anniversary! Pull up and celebrate with us! #FiveYearsYoung

Next up: “Young Califooorrrnniiiaaaa!” If you guys are familiar with the movement, you know exactly what I’m quoting. Young California puts on for the type of Hip Hop I fuck with the most. It’s that West Coast sound that just goes so hard. The production is usually what grabs me first. This was their #5YearsYoung show at The Observatory in Orange County.

The lineup had all my favorite artists. I knew this was going to be a mission, but… #FOMO. I actually ran into Dre Sinatra at the Belly release party earlier this week, and you know I had to ask for set times. He said the show was going to be from 12am to 2am. Noooooo.

To make matters worse, it was pouring rain. Special thanks to my girl who drove, she’s the real MVP. She had an umbrella in the whip, too. We got there at what seemed like the perfect time. The venue was packed, as expected. Tickets were only $10, and with a lineup like that, you can’t help but call it a deal.

damn @PROBLEM354 got the @ObservatoryOC so lit ?? MY SQUAD. @YoungCalifornia pic.twitter.com/zkBgXHlyia

At this point, I’m drenched, and I’m freezing. But my misery went away real quick. Problem hit the stage and everything was okay. “Like whaaaaat.” He always brings the energy, and the crowd was feeling him tough. His crew took over the stage for “My Squad.” That song slaps.

Next up, Eric Bellinger. He killed it. Problem came back out for “I Don’t Want Her,” one of the best club songs to-date. Shortly after, Casey Veggies takes the stage. He literally performed “Backflip” and dipped. Although I do love that song, I thought it was funny. It seemed like each artist was given at least a three song minimum with how the show had been going.

The absolute best set tonight (for me) was P-Lo and Kool John. I’m from the bay. Game over. P-Lo is life. “Bitch I Look Good” is my anthem. “Light This Bitch Up” and “Blue Hunnids” had me straight giggin’. I was really sad when their time was up. They brought out Sage The Gemini next. HBK Gang, represent.

Back to Los Angeles: AD got the “Juice.” I saw all my people on stage (Pun, Adrian Swish, Jay Nari). They were throwing out plastic AD cups into the crowd. I wanted one. Ha!

Man, was too lit. “Cut It” is probably one of the best songs of 2016. It will forever remind of my trip to Miami with my girls. We hit Club Liv the night Lil Wayne brought out Birdman. Shit was lit. Back to O.T. He rocked a stage in a denim blazer and skinny pants. Towards the end, he gave a little heartfelt speech about how everyone thought was going to be a one-hit wonder with “CoCo.” Have you guys heard “Push It”? Shit goes.

Next up, the homie G Perico. His Shit Don’t Stop mixtape slaps and you know he had to open with that track. Shout out to Sasha on the stage. We were upstairs on the VIP balcony, so we had a bird’s eye view. I realized this was much better than the photo pit, where you’re typically too close for comfort to the artist.

On my way out, I ran into DJ ASAP, one of the founders of Young California. I had no idea he was one of the four that started it, so I was extra pumped when I found out. He had come from The Bay for this. Also, shout out to Dre Sinatra and DJ Carisma who hosted the show tonight. They’re the shit.

Alas, the show everyone has been waiting for on this Red Bull Sound Select #30DaysInLA lineup. Jhene Aiko is bae. There is absolutely no denying this. Not only is she an angel sent from above, her voice as well. And personality. Homegirl loves to smoke that ganj and she loves to turn up. She’s a real one.

Free glitter for your face and body.

The show took place at Avalon in Hollywood, where I last saw E-40 and Destructo. This club usually goes off, so I was enjoying the mellowness. I was late so I rushed in, but I saw this along the way. Everywhere I look, bitches had glitter all over their bodies and faces. I was jealous, I wanted some. There were makeup artists posted to glitter you up. It went very well with the majestic theme, as well as Jhene’s outfit. She always looks on point.

The stage was set up was exactly as if she was in her living room, which was on purpose. She literally had her homies chilling on the couches. Super dope. I wanted to be them ha. Shout out to the girl in the crowd behind me who knew every single word to “Living Room Flow,” which Jhene said she was playing live for the first time tonight. Shit like that makes me so happy. Because hey, I’m a fan too. I go to these shows because I’m an actual fan of their music.

Get you someone who looks at you the way #BigSean looks at #JheneAiko ❤️ It's #DejaVu ?? @twenty88 @rbsoundselect #30DaysInLA

The highlight of the night was definitely her bringing out Big Sean to perform some Twenty88 tracks. During “Deja Vu,” we all melted over how in love they were. Just look at how Big Sean is looking at her. #RelationshipGoals af. Before he got off, he gave her a peck on the lips. My homegirl kept saying it was staged. Stop. It was adorable.
She let everyone know she was sick tonight, but had to come out for L.A. Thanks for blessing us Jhene. “The Worst,” “Comfort Inn Ending (Freestyle)” and “Bed Peace” left us with the feels. We are definitely day one Jhene fans. “Wth” was paired with an amazing solo run by the cello player. The live band on stage, which included a glorious harp, drums, and piano, excelled tremendously.

Next surprise: Vince Staples pops on stage for “The Vapors.” The finale: Chris Brown in the building. Drool. They first played “Drunk Texting” before turning up with “Post To Be.” That moment she replaces “booty” with “pussy,” though. As you can hear in the clip, everybody went nuts. Or balls.

I know I thought Jhene Aiko was bae but AlunaGeorge is right up there. Another Red Bull Sound Select #30DaysInLA, this time at Belasco in Downtown L.A. For once, we pulled up early enough to actually hang out and explore her set started. I discovered Aluna in my rave/festival days. Oh, Coachella. My friends were obsessed with her and I quickly conformed. She has the most amazing vocals, and electronic music to match.

Thank you, Red Bull, for this AlunaGeorge long sleeve tee! Super amped about it haha. Aluna just released her album I Remember, which everyone has been thoroughly loving. It’s great. Homegirl is from London, and I’m obsessed with her accent. I literally loved when she talked in between songs tonight.

Another benefit in being semi-early, you’re able to catch the openers. I walked into Xavier Omar’s set and was really impressed. He could sing. He closed his set with a cover of “Purple Rain” by Prince that sounded amazing. I was surprised he took on such a classic.

I loved Aluna’s outfit. All black everything with this glorious fishnet cardigan. She’s so cute. Everyone there was smitten by her tonight. “Your Drums, Your Love,” “I Remember,” and “White Noise” with Disclosure all were gems. During “Automatic” featuring Zhu, she brought this device that looked like she was playing drums, but it was electronic. Does that make sense? I tried (Haha).

She brought Pell to the stage to play “Full Swing.” Yassss. It took me a good minute to realize who it was. He has such a distinct voice, I love it. She closed with “Not Above Love,” along with an epic solo number by the trumpet, trombone, and sousaphone.