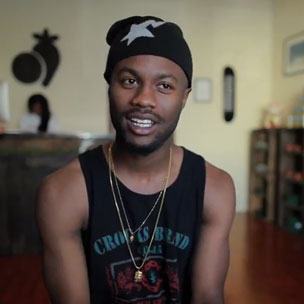 Following the release of what has quickly turned into his biggest single to date, Casey Veggies explains how a chance night-out at a Hollywood club helped him realize the true potential for his Iamsu! and YG-featuring song “Backflip.”

Speaking with HipHopDX from the studio in a clip that debuted as a part of today’s DX Daily, Veggies recalls walking into the club on a recent night and being surprised to hear his own music.

“The other night, it was funny, I went inside Club Emerson, it was popping in there,” Veggies tells HipHopDX’s Ural Garrett. “Once I walked in they was playing ‘Backflip.’ I was like, ‘Yo, that’s crazy.’ DJ Drama, he was on the 1s and 2s. It was cracking in there. I ended up performing it. They played it like three times that night. I was just going to the club to chill with my cousin, he play for the Tampa Bay Buccaneers. I was going to the club with him. He was like, ‘Come to the club with me.’ I wasn’t even planning on going out, the fact that I just went in there just to chill and Drama was in there playing my song, I was like, ‘I don’t care what people say, this “Backflip” song is crazy.’ All my eight years as a rapper I never been able to walk into the club and they playing my song like five times. That was a moment for me. Being 21, just now being able to go to the club.”

Detailing the process of putting the song together, Casey also explains how YG’s feature came about.