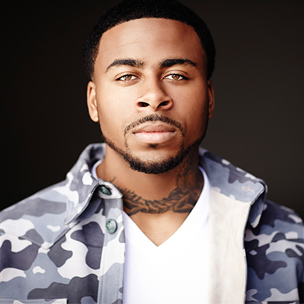 The Bay Area’s own, Sage The Gemini, has made a name for himself with two hit singles topping the charts on the Billboard “Hot 100,” and all without a record deal. The 21-year-old rapper and producer has over one hundred million YouTube views to his name, which is no small achievement, and songs like “Gas Pedal” and “Red Nose” drove furious bouts of twerking on Vine. His drive and success is influenced by the Bay Area’s The HBK Gang aka The Heartbreak Gang, a Hip Hop collective based in Richmond, California. Founded by Iamsu!, Chief, and P-Lo in 2008, The HBK Gang eventually took Sage under their wing and watched him blossom into a thriving artist.

Born Dominic Wynn Woods out of Farfield, California, the young emcee takes on the name “Sage the Gemini” due to his zodiac sign and the color of his eyes. He began chasing his dreams at a very young age, but after not receiving much help, he doubled-down on motivating himself. By the age of 14 he taught himself how to produce and create beats. By tenth grade he had molded himself into a completely self-sufficient artist, claiming all he cared about was music.

Sage dropped his first online track, “You Should Know” in 2008 via Myspace where it went viral, generating over three million views and attracting mass attention worldwide. But this was just the beginning, as he developed a local presence with countless performances and began honing his own sound.

“Musically, it’s a mixture of everything,” Sage explains as per Republic Records, “It’s like going to McDonalds and pouring every drink in one cup. I want to start my own genre, like a crossover of R&B and Bay Area party Hip Hop.”

His crossover appeal is evident, as his hit single “Gas Pedal” quickly reached platinum status and it remains a club favorite. This follows his first hit single “Red Nose,” which sold over 500,000 copies. Sage joined Republic Records in August 2013 and has since been hard at work on his debut studio album Remember Me, slated to be released on March 25, 2014.

HipHopDX: Being from the Bay Area, what do you remember about the Thizzle movement and how did it influence you?

Sage the Gemini: The Thizzle movement? Oh, the Hyphy movement [laughs]. Actually, a lot. It’s just a Bay Area culture type of thing. When people think of Hyphy, they think of dangerous activities like fighting and shooting. It was actually a good time. Mac Dre, E-40, Keak da Sneak, Mistah F.A.B.—all those kinds of people—they were like the dads of stuff like that. [They] kind of took care of us in the Bay Area, and it was a big come together type of vibe. We don’t really have too much to do [in] the Bay Area as young black people, and they made us come together as one. It just helped us stay out of trouble and stuff like that. Everybody was dancing. There was sideshows here and there. People were doing dumb stuff on their own out there. As far as music, it was a sound that we created. We had something we called our own. Everybody started doing it. Everybody wants to be a part of it. It was just a big fun time.

DX: What’s the biggest adjustment after having a hit single and being publicly recognized?

DX: Regarding “Gas Pedal,” you mention you would pick Iamsu! over Tupac or Snoop. That’s huge. What is it about Su that stands out to you?

Sage the Gemini: He just a young, creative, free-spirited person. Not saying Tupac or Snoop isn’t, but it’s all about positivity with him. He makes his own beats, and I seen him come from the struggle. Everybody’s from the Bay Area. I never been in the studio with Snoop or any of them, but it’s just a different type of vibe, a different type of music that people attach to. And I attached to his music. You know [when] you picture something in your head and you’re trying to do it? I was trying to do it, but the music I was trying to pursue was exactly what he was doing. So I’m like, “Wow. I never heard anybody with this type of music…just be free-spirited and don’t care what anybody else thinks. Actual great music, you know?” It’s crazy.

How Sage Balances His Indie Mentality With Major Label Support

DX: What do you think was the key to getting two hits on the charts as an independent artist?

DX: You’ve been with Republic Records since August, how does your time with them compare to when you were independent?

Sage the Gemini: I’ve got a lot of things. I’m a powerful movement by myself, but there’s only so much you can do going independent. Some people doing stuff like big awards shows, they didn’t get there by themselves. They didn’t set that up. I’m a strong movement by myself, but with help by the record label, I thought I could shoot past the limit. I almost got myself to the top. But it’s been a fun ride. They took me to all the awards shows, and they got me a lot more exposure. They got my beats out there…everything. Now people know and can actually put a face to the name of the song.

DX: You mention that dancing is a huge part of the HBK Gang’s creative process, as in the “Go Crazy” music video. What is it about HBK’s style that stands out or differs from any other Hip Hop dance?

Sage the Gemini: It’s not negative. We’re not worried about telling people what we can do, and telling people what’s negative. It’s all about positivity. We’re very creative, and we don’t limit ourselves. We do what other people say that [we] can’t do. Not just to prove that we can, but because we want to. We don’t say nothing negative—no guns. I don’t smoke or drink. Other people, they do. I don’t know. That’s HBK. We’re just people. Just all about positivity. Period.

DX: The group prides itself on authenticity and diversity. You had to be approved by the four founders: Su, Chief, P-Lo, and Kuya Beats. What was it like getting their approval and joining such a close family?

Sage the Gemini: It was great. I’ve never been so starstruck in my life. I was 13, 14-years-old. For me to actually be a part of what I dreamed of, it’s just retarded. It’s crazy. I go around and see a lot of people be like, “Oh shoot, you’re so and so.” But still to this day, I see Su and I’m like, “Oh damn! I didn’t know Su was gonna be here.” It’s a big thing. Like I see Chief, I’m like, “Chief what you are doing here bro?” Kuya and P-Lo, I get star struck with everybody. It’s just a big, wonderful gang. We tired of all this damn negative violence, worried about watching your back and stuff like that. You can’t really have fun. It’s just one of those times when you sit back and you’re like, “Man, I wish I could do this. I wish I could do that.” That’s just how that is in that group. Anywhere you go it’s fun. Anywhere you go it’s class, it’s creativity, [you] gotta get everything done. Nobody is trying to take away from it. [We’re] trying to break the shell.

DX: With tracks like “Function” and “2AM,” what similarities do you see between L.A. and the Bay? Why have they had such good chemistry lately?

Sage the Gemini: I don’t know. I guess what happened was, a lot of people say that the Bay really didn’t like LA. I don’t know where that came from, that might have been the older Rap guys. I actually like LA. They got a lot going on. I guess the younger generation is squashing what the older people started. We’re coming together. We’re seeing that we’re all family. We all need to stick together and just make it to the top.

DX: You already have two platinum records. How much did you know about the business side of making music before you started rapping? What have you learned since then?

Sage the Gemini: I got schooled a little bit growing up and stuff like that. I just rather keep my knowledge to myself sometimes, so I’d like to move on to the next question.

DX: On the song “Don’t You,” what do you mean by “Relationships, when does the ‘real’ come in?”

DX: You talk about being stuck on a girl from the seventh grade. Are you still pursuing her? Does she know about this track?

Sage the Gemini: Well she knows about it. But no, I have a girlfriend now.

DX: Who are some artists you are feeling right now?

Sage the Gemini: Definitely Justin Timberlake, Iamsu!, Dave Steezy, Chris Brown and Robin Thicke. I haven’t heard anything new from Usher. I think it’s cause I haven’t been searching or anything. I like more of his old style. Definitely myself, cause I can’t make anything that I don’t like. I don’t know, there’s more. I can’t remember right now.

DX: Any artists you wish to work with in the near future?

Sage the Gemini: Oh yeah. Of course. All the artists I just named. Justin Bieber…there ya go. Him too.

DX: What motivates you?

Sage the Gemini: Shoot. Just like the progress that I see inside myself and my team. It’s nice.. Just [to] see everything working well. Love. It’s a great life situation. Stuff like that. Everything like shows. The crowd, when I come out, they be like “Baaaaah.” I just be like, “Dang!” It motivates me. Seeing other people perform motivates me. You know how people perform—Wiz Khalifa and stuff like that—when he performs, and when Su performs, and the crowd is just like, “Oh my god.” They just turning up, and the lights are going crazy. I’m like, “Dang.” That motivates me to just be a better performer and make better songs.”