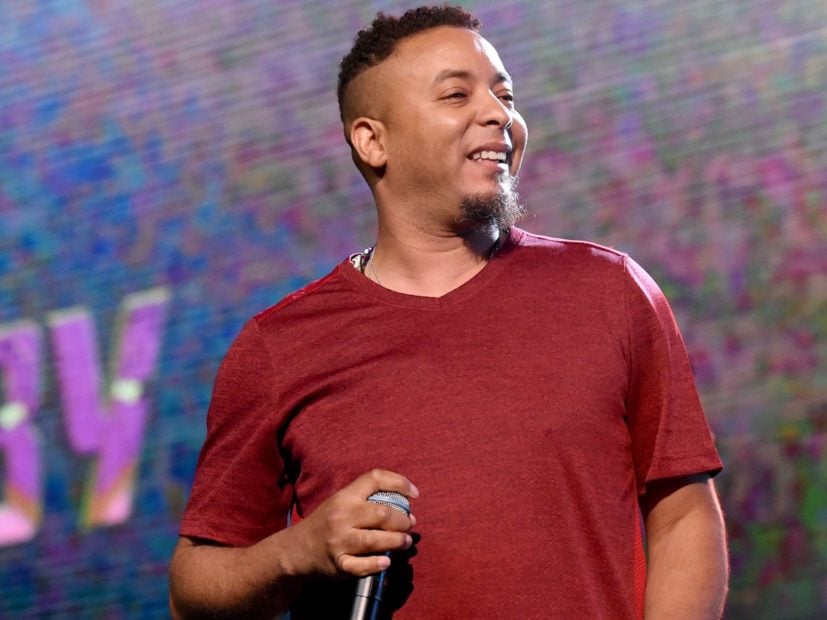 The Pharcyde is arguably one of Hip Hop’s most beloved groups to spring from the ’90s golden era. Over beats infused with the sophisticated sounds of jazz greats like Herbie Mann and Dizzy Gillespie, Slimkid3, Fatlip, Bootie Brown and Imani wove “ya mama” jokes and personal tales into a colorful tapestry. But somewhere along the way, things went south and the group fell apart, leaving behind a trail of hurt feelings and anger.

After putting out two classic albums — 1992’s Bizarre Ride II the Pharcyde and 1995’s Labcabincalifornia — they managed to pump out what would become the foursome’s final album together, 2000’s Plain Rap. By that time, the lingering tension inside the group and pressures of the music industry had already saturated their lives. In fact, Slimkid3 (real name Tre Hardson) tells HipHopDX that’s what sets Bizarre Ride and Labcab apart.

“Listen, when you gotta take lunch breaks to read a contract …  we had to go through shit like, ‘Damn, this is our percentage that we get and then we gotta pay this much back and split it five ways.’ It’s just like, ‘Man.’ It’s just a lot of shit to go through.”

Shortly after the release of Plain Rap, Fatlip was no longer in the group and Tre also headed down the path to a solo career but never intended to leave The Pharcyde permanently. For whatever reason, Bootie Brown and Imani appeared convinced Tre was done with them and moved on. In 2004, Bootie Brown and Imani released Humboldt Beginnings under The Pharcyde moniker without any help from Fatlip or Tre.

According to Tre, their breakup came down to a couple of ultimatums and Tre’s willingness to work with artists such as Brian Austin Green and Korn.

“Honestly, the other two guys really just want to run with it,” he says. “They don’t want to mess with me. I can’t say that they gave it a good try. They kind of gave me an ultimatum twice and that’s the reason. I wouldn’t give anybody ultimatum about anything. So, that’s why the fuck I’m not there. I wouldn’t do that to you, so don’t fucking do that shit to me.

“We all had creative differences and routes that we’re taking and I worked with Brian Austin Green, they didn’t like that. I did stuff with Korn. They didn’t want to do the song with Korn. [Singer] Jonathan [Davis] was like, ‘Yo, Tre. Why don’t you get the other guys and come do this song?’ So, I went to the studio where the other guys were and I was like, ‘Yo, Jonathan wants us to do this thing. We should go and support this since they took us on tour with them.’ They’re like, ‘Nah.'”

Their decision had nothing to do with not liking Korn. Tre believes it was more about their reputation.

“They were thinking about what that would look like to Hip Hop,” he says. “It was a different time. I kind of understand a little bit why they would have done that, but for me, I’m like, ‘Fuck that. Let’s do this.’ I’m not about to be nailed down. People were afraid of the word ‘sellout’ and stuff like that. No, you don’t sellout. You just do a great job motherfucker. You’ve got your purists, you know?”

There were a few moments where a reconciliation seemed possible. In 2006, The Pharcyde was booked for Rock The Bells festival and it seemed like they were able to temporarily forget about their tumultuous past.

“I’m going to tell you this, yes, maybe we had differences or whatever, but we did the same fucking things when it came to our professionalism,” Tre says. “There was nobody in the dressing room. We were always stretching, meditating, getting ready for the show. The same exact shit that we did when we were together in the beginning is the same shit that happened when we got back together.

“Rock The Bells was a huge success as far as I’m concerned. When we stepped to the stage, it wasn’t about our personal problems. It was about rocking this fucking show and we did it. And there’s a lot of things that I commend us on because yeah, we stepped out of our bullshit. So the reason why we’re not together is because I guess there’s some stupid bullshit still around. As long as you want to hold on to the golden goose you will … it’s like somebody drunk with power.”

Ultimately, Tre thinks the rift between the members of The Pharcyde was nothing that couldn’t have been mended. Now, Bootie Brown and Imani are billing themselves as the original Pharcyde, despite missing half the group.

“They’re going in their own direction and walking in their own direction,” he explains. “There was some hurt that happened with me and my exodus or what have you. There was just a lot of stuff going on. But honestly, when you think about it, nothing happened where we couldn’t get people back together with nobody. Nobody killed anybody. Nobody slept with anybody’s girls. None of that stuff happened.”

Needless to say, their brief reunion didn’t hold. In 2013, Bootie Brown and Imani filed a lawsuit against Fatlip and Tre, claiming breach of contract, unfair competition, unjust enrichment and trademark infringement. Simply put, they wanted to stop them from using The Pharcyde name, something Tre already agreed to in a settlement-dissociation agreement some years prior.

“It’s just challenged me so much and created so much depression,” he admits. “I’m trying to raise my family and feed my kids, dude. Really? I can’t go through this type of shit. With you suing folks and just … ah, man … that was the last straw right there, when they sued me, Fatlip and [former label] Delicious Vinyl.”

Consequently, Fatlip and Tre started performing as Bizarre Ride and have since moved on to other endeavors. Tre also teamed up with DJ Nu-Mark for a new group called TRDMRK featuring burgeoning MC Austin Antoine.

Despite The Pharcyde’s issues, Tre insists he would never let their conflicts tarnish the group’s legacy nor would he ever take full credit for the magic of The Pharcyde.

“I always looked at it like we did this together kind of thing,” he says. “I am a part of the heartbeat. I am part of the heart, yes. I just can’t take full credit. They [Bootie Brown and Imani] might do it, but I just really can’t do it.

The TRDMRK EP is expected to arrive on February 15.