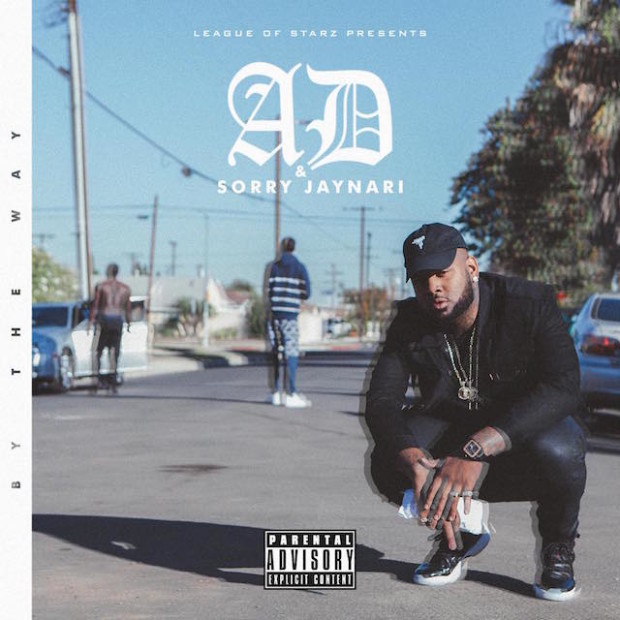 Something has to be in The Hub City’s water. There isn’t an area within West Coast Hip Hop still churning out top-tier rappers like Compton. Even when you nix media darlings such as Kendrick Lamar or YG out of the equation, there’s enough talent to spread around. AV, Problem, Boogie and a host of others have thoroughly put on for the city. One rapper from the area becoming a local household name is none other than Armand Douglas a.k.a. AD. It’s no shock that the League Of Starz-produced “Juice” from his Blue:89 mixtape last year became a huge local radio hit around Los Angeles county. His vocal delivery is as loud as the muffler of an 86 Chevy Caprice fitted with a 454 engine swap. Meanwhile, backing soundtracks for AD normally involve productions based more in classic G-Funk era synths and contemporary drums. Similar to YG, he excels at classic gangsta rap with a modern edge. Blue:89 follow-up alongside League Of Starz member Sorry Jaynari By the Way, serves as another step in the direction while better carving out his own lane.

Like a megaton nuke, By the Way opener “Boom” is as bombastic as the title suggest. “Niggas slept on me for years so I took that shit as a blessing / no weapon formed against me my dreams now manifesting,” is AD taking his large battle axe delivery and being precise enough with the wordplay to be truly effective out the gate. “Like Diddy” is aspirational to the tenth degree; offering the same amount of potency. When AD wants to drown listeners with his overwhelming confidence, “Nothin Like You” does the job effortlessly.

With disregard to the bloated West Coast all-star remix (plus one outsider) of “Juice” featuring Ty Dolla $ign, Game, O.T. Genasis, Iamsu! and K-Camp, every guest appearance is meaningful enough to not sound phoned in. YG’s assistance on album highlight “Thug,” rivals the politically charged “FDT” for the year’s best cross gang connection. Giving his Second Amendment stance while taking a clever interpolation of the Gap Band’s “I Don’t Believe You Want to Get Up and Dance (Oops)” (made popular on “Snoop’s Upside Your Head”) on “Strapped” featuring RJ and G Perico feels tailor-made for backyard BBQ Crip Walking. Getting Nef The Pharaoh and E-40 for “Tap In” proves AD understands Bay Area functions perfectly. Demonstrating he can lyrically hold his own besides Freddie Gibbs through “No Love” (also featuring Mozzy) provides another example.

Sorry Jaynari’s production hits one note over the project’s 37-minute timespan which could potentially be a problem for some. The future G-Funk sound never really differentiates from core drum and synths sounds. At the close of By the Way, there’s the realization that each track lacks individual personality; as the beats only serve to accentuate AD’s delivery.

By the Way isn’t concerned with much outside of being as street and funky as possible. Taking that approach, AD and Sorry Jaynari do more than an adequate job at supplying exactly what fans of more traditional West Coast gangsta rap want and establish great anticipation for the follow-up.