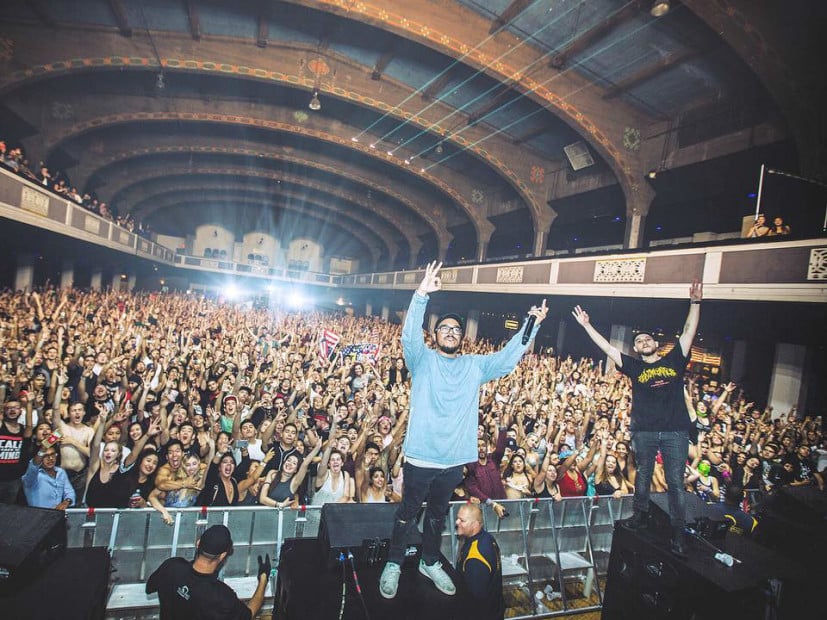 Our #GoodTimesAhead tour kicks off this week! Bringing the Good Times to your city ✈️ goodtimesaheadtour.com

Damn y’all. GTA got me downloading their album Good Times Ahead as we speak. I would definitely say that’s a good indicator they put on a good show. I’ve seen them many times before, but tonight was special. Hearing “Little Bit Of This” featuring Vince Staples live was the cherry on top (shout out to my girl Cherry who get hitched today!).

GTA’s Good Times Ahead Tour at The Shrine in Los Angeles, CA.

Nothing makes your girl happier than some glorious set times. Nothing. You can plan when to pull up to the venue and calculate how many hours of sleep you’re going to lose that evening haha. We pulled up to The Shrine in Los Angeles (next to USC), a venue I am all too familiar with.

We instantly fell in love with Loudpvck, a DJ duo from LA. They were like mini GTAs up there. Hip Hop, trap, EDM. Yes, please. They were really fun to watch. They legit looked like they were having the time of their life up on stage.

GTA was worth the wait until 12:30 a.m. I was a little concerned on my stamina for the night (just came from a wedding), but I was too turnt to check the time. Fans must have seen GTA’s tweet about set times because the size of the crowd went from 0 to 100 real quick. All of a sudden, The Shrine was sold out.

Man. These two (Julio Mejia and Matt Toth) go so hard. I was actually confused because Iamsu! was on the lineup originally, so I text Jessica from Goldenvoice and she said they were bringing him out during their set. Whew. You guys know I love Su.

And this is why. If you play Bay shit around me, 100% I will start getting hyphy. Night complete. Home is where the heart is.

In case you didn't know, @problem354 made an official @rams "My Squad" remix!

FOOTBALL IS HERE! And Los Angeles has a team! The Rams. FOMO at its finest. I actually found out about this game thanks to the announcement from Problem, revealing he’d be performing his LA Rams “My Squad” remix. LA Rams versus Buffalo Bills at 1:25 p.m. at Los Angeles Memorial Coliseum by USC. Let’s go.

I recruited my brother and his best friend, who both just moved to Los Angeles from Irvine, CA (#TYBG). They were actually more excited for the game than I was, which I totally appreciated. What better way to spend your Sunday than watching an NFL football game with your family? This was too solid.

Minus the heat. The heat was not so solid. We kept fantasizing how amazing it would be if this was a night game. To be honest, we had just as much fun walking the perimeter and getting food and drinks as we did watching the game in our seats. The atmosphere was great and everyone was there to have a good time.

Within a minute of being inside the stadium, I see Freddie Gibbs walking the other direction with his lady. I thought about chasing after him and saying hi, but decided to let him be. He probably appreciated that.

Unfortunately, us taking our sweet-ass time lead to me completely missing Problem’s performance. Sorry Chachi, I know you killed it, though.

I could not help but notice the overkill of Bills fans in the building today. They for sure left happy campers because they got the W. Shout out to Tyga, Chris Paul, and Ty Burrell (a.k.a. Phil Dunphy from Modern Family) in attendance. Poor CP3, when they showed him on the Jumbotron, the entire stadium boo’ed. Unfortunately for the Clippers, Los Angeles will forever be home to the Lakers.

The Birth of a Nation left me completely speechless. This is actually a remake of the original film, about the story of Nat Turner, who led a slave rebellion in the South in 1831. Going on a Monday night was too much. All I can say is you need to be thick-boned for this one. I definitely shed tears, along with many others in the theater.

Tonight was special. Shout out to Mo with Accelerated Radio who I met at the Usher x Tidal listening party. He asked me to be a special guest on Urban Hollywood Radio, to talk about my journey in music and being a female in the industry. This time, I was being interviewed. Shit.

I had a blast. Shout out to Cookee and Lady Red Nails for hosting me! It was a lituation. Radio is actually super fun haha. I can’t get over my brother calling in and freezing when they asked him a question about me. He literally froze. I was so upset. One of those moments where 10 seconds of silence feels like an eternity.

Who fucks with Zhu? If you aren’t familiar, I’m about to put you on. He’s an EDM DJ and he’s Chinese. Shout out to my people. If you guys didn’t know that, I don’t blame you. Homeboy hides his face 90 percent of the time.

Zhu is signed to Mind of a Genius, the same label Gallant is signed to. My brother always goes, “Wait you like his music?” Because he’s not Hip Hop. Yeah bro, he’s talented af.

Speaking of my brother, his roommate’s sister is actually Zhu’s assistant. Crazy right? Shout out to Kimberly for being the ultimate plug tonight. The venue was completely sold out, including VIP on the balcony above. So many people were turnt… on a Wednesday night. I don’t blame them.

The Shrine was a hot mess per usual. This security guard cursed at me and my girl, screaming “clear the fucking walkway.” That was a mistake. You do not curse at us. We are two grown women in our mid 20s. There was no way he was getting away with it. We gave him hell and then reported to his manager.

Long story short, the show was rowdy. In a good way, though. You could tell everyone genuinely loved Zhu’s music. Also want to acknowledge the live instruments on stage with Zhu. Paired with moving laser beams and trippy visuals, it was beautiful.