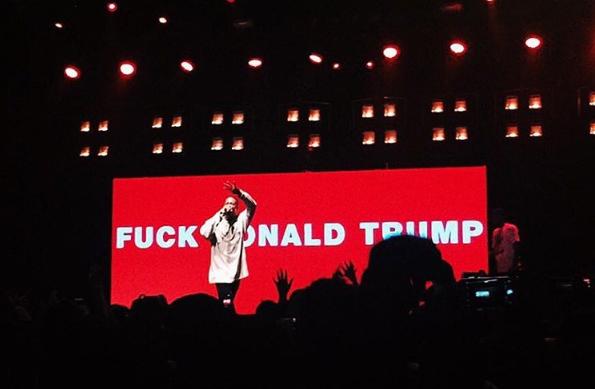 There was no way in hell I was missing this. Lil B and Clams Casino at the El Rey Theatre in Los Angeles, one of my favorite venues. Who wouldn’t want to see the Based God live? First of all, I’m from the bay. The Pack brings back memories of giving zero fucks and getting hyphy at any given point of the day.

Clams Casino on the turntables opening up for Lil B.

First up was Clams Casino. He’s mostly a producer, and he goes hard. I fell in love with his track “Witness” featuring Lil B. That’s a great place to start. The crowd tonight was beyond lit, exactly how I like it. I absolutely hate when I go to a show and the crowd is boring. The mosh pit started before Lil B even hit the stage. #TYBG.

the based god straight up dgaf in bball short lmao @LILBTHEBASEDGOD @clammyclams CAN I GET A WITNESS? pic.twitter.com/DbHFdlJr4G

Shout out to unfixable typos on Twitter. Lil B came out in straight up basketball shorts. Bro. He was rocking crew socks on with tennis shoes. I was dying. Either it was intentional or he really dgaf. I’m guessing the latter.

After performing a few tracks, Lil B takes it to the turntables, playing DJ the remainder of the night. I had an epic spot to the right of the stage, sitting on the ledge. The kid behind me was literally solo and here for the Based God. I had to get up several times because the Bay slaps were so lit.

Nothing will ever replace what The Pack meant to me and my friends. I literally had to text them at multiple points throughout the show because the nostalgia was too real. Hearing “Booty Bounce Bopper” and “Candy” live tonight with Lil B, Stunna, and Lil Uno reunited on stage was priceless.

Thank you, Based God.

The Allies Dinner at House of Macau in Hollywood, CA.

My boss got the exclusive invite to The Allies Dinner (10 Summers x 4 Hunnid) at House of Macau in Hollywood, CA. He couldn’t make it (a Denzel Washington screening took priority), so I took his spot. Anytime, Chief.

I walked in to find my old manager as the current manager. I was too excited. PS, House of Macau is a gorgeous Asian fusion restaurant in the heart of Hollywood. What a small world. Shout out to Oscar. I previously worked for him at Philippe in Beverly Hills, CA. Shout out to nine years of being a server. *money emoji*

Shout out to DJ Mustard, RJ, YG, and Jake&Papa in the building. Or outside the building because this was outdoors on the patio. ICYMI, we recently got to hear his upcoming Cold Summer project. Fire.

I didn’t stay long enough to eat, but the event started at 7pm and at 9:30pm, there was still no food. Shout out to my girl Ashley at Power 106 who was contemplating aborting mission and hitting McDonald’s.

We at the @ObservatoryOC tonight show starts at 10pm

I hit the road because… Nipsey Hussle. SKRT SKRT. The drive to The Observatory in Orange County, CA is no joke. But when you’re number one rapper has a show, you make sacrifices. I don’t have to be up at 6am or anything. Nope.
Nipsey Hussle shows never start on time. When I was told he was on at 10pm, every ounce of me had to resist a snarky response. Nip probably isn’t even at the venue at that time.

Real talk, though. Homeboy didn’t hit the stage after midnight. His entire All Money In squad had their own little segment, teasing the crowd for 45 minutes. They were too lit. We concluded they were all definitely good off that Henny.

Nipsey killed it, though. This is maybe the tenth time I’ve seen him live, and I swore by the fifth time I knew his set my heart. But this is the first time I’ve seen him since his Slauson Boy 2 mixtape dropped, so it was super dope seeing those tracks live tonight. Shout out to Dave East and G Perico coming through.

I say this a lot, but the Crenshaw mixtape will never get old. Shout out to DJ VIP for the tickets. Victory Lap, where you at?

I was waiting for this show literally all day. Hashtag Monday Motivation. YG’s Fuck Donald Trump Tour featuring Kamaiyah and RJ at The Observatory in Santa Ana, CA. The push to the OC on a Monday night was definitely a factor (more a concern). But hey, FOMO.

Shout out to my homeboy who drove my car. Teamwork makes the dream work. We pulled up around 9:30pm because… LA traffic. I knew I was going to miss Kamaiyah’s set, but I caught her at FYF Fest, so I was chilling.

I fuck with RJ tough. He’s the homie. Ever since his “Get Rich” record with Iamsu!, I’ve been a huge fan of his music. OMMIO 3 knocked too. Being an LA cat, I thought him opening for YG was a dope fit. He always does his thing on stage. His “Shimmy Ya” dance is a favorite of mine.
We were too lit for this show. I was definitely caught myself heavily analyzing it all. And this is what I came up with: wow. YG really is that dude. I mean, we established this already. But this show solidified it. He legit took the streets and made it mainstream. It was crazy to see these kids chanting “My Nigga” verbatim.

Speaking of… this venue was packed from wall to wall, head to toe. He definitely sold this shit out. I cringed at every sweaty human being who bumped into me, which happened almost every two minutes. I needed space.

Sadly, I knew YG was going to bring out a Donald Trump piñata at the end. Thanks Complex for ruining the surprise. Was there even candy in that paper Donald Trump?

This show to me was different than his others. It was organized, planned, and… on time. The latter being the game changer. It wasn’t your average, no rules rap show, where the artist comes out two hours late just because they can. I can confidently say this is a result of being signed to a label (Interscope).

Shout out to YG’s grandma being in the building tonight. He gave her the cutest shout out ever. She must be so proud of her grandson. From the streets to this sold out show in the OC. He’s got TWO shows tomorrow at the same venue too. An early and late show. Man. This is what he signed up for though. Living the dream.

The crowd went absolutely crazy when he dropped “Toot It & Boot It,” a.k.a. the song that put him on. Meanwhile, I’m over here bumping “Dippin N Sippin” featuring Ty Dolla $ign. Shout out to DJ Mustard with the cameo tonight and Taylor Made for the tickets. He manages Slim 400, YG’s right-hand man.

It also still trips me out how YG made “Fuck Donald Trump” acceptable. Because people actually hate Donald Trump. Recruiting Nipsey Hussle was the cherry on top.