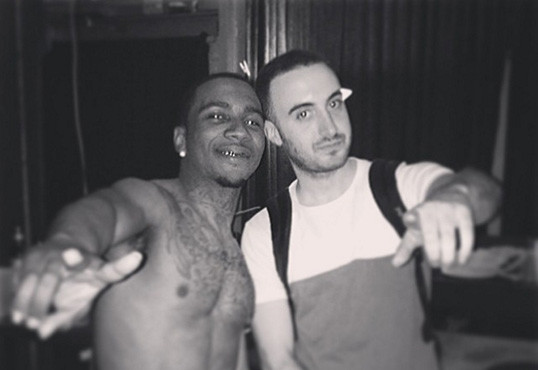 Remember when Lil B created over a hundred MySpace pages filled to the brim with music?

Clams Casino does. The New Jersey native’s early productions were featured on a few of them.

“The first time we worked together was in the fall of 2008,” Casino said over the phone to HipHopDX. “I got his email from one of his many MySpace pages he had at the time. I sent some beats over and the first song we did together was called ‘What’s My Name.’”

Since then, both careers have gone in separate directions.

Lil B has become an enigma. CNN wants to hear his political ideologies, ESPN questions whether or not he can actually curse professional athletes and prestigious universities like Carnegie Mellon pay him for lectures. All the while, the former member of The Pack continued to release a slew of mixtapes featuring tracklistings that span hundreds of songs.

“He’s the most important artist of the internet age,” Casino explained. “All the kids that are coming up now are doing things on their own and not really caring. A lot of that comes from him in how people use the internet. He’s inspired a whole generation doing that.”

On the opposite end of the spectrum, Casino eventually found himself lending beats to A$AP Rocky, The Weeknd, Mac Miller, FKA Twigs, Jhene Aiko, Vince Staples, ScHoolboy Q and a host of others. According to him, working with that variety of musicians has made him a better artist. In his world, “it’s all experience” for Casino.

“It feels like we’ve been watching each other in parallel,” the producer said of his relationship with Lil B. “I’ve been watching him since then and he’s inspired me as well. It’s cool watching and being a part of that in branching out in our own different ways.”

Several mixtapes and an EP later, Casino dropped his major label debut under Columbia titled 32 Levels. Out of the album’s 12 tracks, Lil B is featured on four of them.

Call it a full-circle moment, but the collaborations have inspired a five-date tour set to kick off September 13 in San Diego and closing in Philly on October 14.

“It just makes sense from a tour point because of how big of a part he is on the album and process of creating it,” Casino said. “We’ve done a few shows together. I’ve come and supported him for some of his shows, but this is the first time we’re going out together.”

Though Casino kept quiet about future collaborations and projects, he’s constantly working and feels proud of the reception of 32 Levels.

“I just made as much music with as many artists as I could because it helps keep me fresh and I get bored,” he said. “I need new things and new challenges. I’m happy with how it came out and how artists have approached me.”