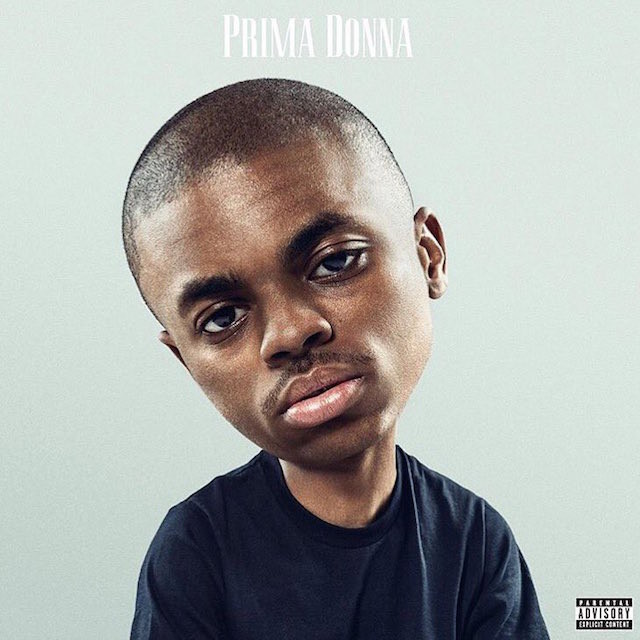 Intentionally avoiding limelight and excess notoriety, Vince Staples has surpassed early expectations matching his charming personality with a continuous stream of progressive releases. Known by many to be a jokester online, his biting sense of humor could be taken as either a defense mechanism against the nihilism of losing friends to tragedies not limited to violence and drug abuse; or perhaps his wit intends to disarm the hesitations of those who could otherwise overlook his sophisticated emceeing. Steadily building a brand around crafting art for art’s sake, with Prima Donna, Vince Staples throws Hip Hop yet another unorthodox curveball.

With last year’s Def Jam backed debut Summertime ‘06, Vince Staples built a narrative around a disturbing yet enticing and sensual visual of North Long Beach’s troubled adolescent culture. Having escaped those traumatic conditions relatively unscathed, with Prima Donna he creates an equally dark alternate reality where a Hip Hop star faces the perils of raging instability. A satirical piece examining the emotional well-being of Vince’s peers consumed by their innermost demons, the EP opens with “Let It Shine” where his character opts to end his life at the brink of insanity. Over the course of the following six songs, listeners are taken on a grim journey through a nervous breakdown in reverse chronological order.

A stark contrast to the music business’ routine facade of glamor, the script Vince Staples authors on Prima Donna once again establishes his knack for putting the fun in dysfunction. Laying it on the line while full of self-deluded righteousness, on “War Ready” he prematurely eulogizes “Fought to the death, never gave in/write that on the grave that I get laid in.” After weighing his options for stress management including a trip to Ibiza, inner peace remains elusive as Vince is unable to envision a brighter tomorrow dismally theorizing “Heaven, hell, free or jail, same shit/county jail bus, slave ship, same shit.”

Heavy hitter DJ Dahi is responsible for half of the project’s material, and working with Staples is a producer’s come true as he’s a newer act all too willing to go against the grain without creative restrictions. “Smile” is a lost soul’s angst driven lamentation on public scrutiny where potential paranoia says the world is cheering on his failure. Treading into the territory of rock with dramatic guitars and strained sung vocals, the pair is to be commended for going left even if it requires extra effort from those accustomed to modern dumbed down approaches.

The latter portion of Prima Donna is comprised of frenetic and excited bravado despite interludes suggestive of underlying insurmountable pain. Channeling the rollercoaster ride that is the stereotypical rap star experience, “Loco” is a tale of groupie love intertwined with dependence on materialism for self-worth, while the title track has Vince Staples feeling triumphant yet ready to do away with fame upon realizing how heavy the crown is.

James Blake contributes the EDM-laced “Big Time”, where our anti-hero tries out some of his wildest flows to date while wearing street cred on his sleeve with quips such as “I been on some up to some no good shit/you on that Cuba from Boyz n the Hood shit.” This depiction of invincibility serves as a fitting climax with its sad plot twist that there was never a truly blissful medium between this work’s two extremes: the despondent big-headed manchild captured on Prima Donna’s cover found stardom useless after leaving behind the dead end lifestyle which he considered most fulfilling.

In a climate that’s indifferent if not completely averse towards innovation and forward thinking, Vince Staples is poised, unassuming and focused on leaving an indelible mark. Having gone so far as to disavow his past conventional modules that fans swoon over, Prima Donna is his most challenging work to date. Placing an even edgier spin on his recurring themes of fear and hopelessness, this cautionary tale makes a strong albeit fictional case for the necessity of mental health initiatives in urban communities. Already treasured in the hearts of his former Crip acquaintances, Vince’s work ethic has made him a budding star, and as he becomes increasingly comfortable with the road less traveled he stands to advance our culture altogether.