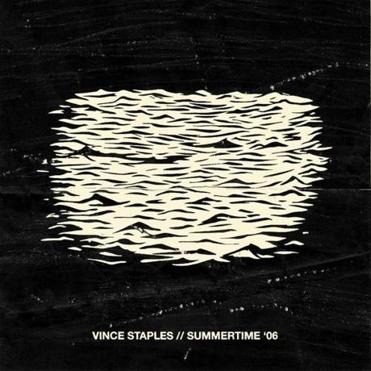 Almost a year before the lead video from Vince Staples’ Summertime ‘06 was released he seemed to be hammering out the concept during interviews. “The way I look at music—especially urban music, Black-people music, whatever you want to call it—is that we’re all in the zoo, and the listeners are the people outside of the cage,” he told Pitchfork. “You got all these people sitting outside the glass and it’s cool to point at the lion and shit,” Staples said a few months later in an interview with HipHopDX. The video for “Señorita” is chilling: in black and white we get a terrifying close-up of an apocalyptic version of Staples’ Long Beach as he strolls along unfazed. At the end of the video, the camera pans out to show a Norman Rockwell fashioned white family watching the scene, smiling from behind a pane of glass. Staples seems consumed with the disconnect between himself and listeners and is avoiding palatability to seize the moment. Nowhere is he inviting us to live like him and he’s neither hamming it up or playing it down for the spectators.

Of course, Staples isn’t alone as a West Coast rapper refocusing America’s gaze on California gang life, and despite a track record building affiliation with Odd Future, his subject matter and ambitions seem as indebted to another recently looming figure 20 miles north of Long Beach in Compton. Like on Hell Can Wait, Staples’ short-form Def Jam debut released last year, the 22-year old emcee has a penchant throughout Summertime ‘06 to strip away the glory from gangster rap and uphold a matter-of-fact depravity. Outside of his music he’s fired off some non-confrontational “well actually” quips about the realities of drug dealing and gang life, and inside of it he plays things straight, avoiding preachiness and embracing his own stories as hopeless and traumatic instead of inspirational or ingratiating.

Staples’ unassuming character clashes with some of the tales of gang exploits, but the effect is of chilling believability. He Tweets about his Pokemon acumen or childhood ambitions of becoming a particular Power Ranger, but he shoots down pop culture sugar pills when it comes to his music about violence. “Ho, this shit ain’t Gryffindor / We really killin’, kickin’ doors,” he raps on “Lift Me Up.” Still, Staples bemoans, “All these white folks chanting when I asked’em where my niggas at.”

Together with Clams Casino, DJ Dahi, and Christian Rich, Def Jam VP and evergreen career-steerer No I.D. sets an anxiously spacious minimalism throughout a 20-song tracklist. On “Jump Off The Roof” No I.D. swathes together a rattly tin drum break with spooked vocals and the most industrial synth and drum kit at his disposal. Vince sounds appropriately paranoid, but the threat in the title almost seems self-inflicted. Christian Rich’s “Señorita” is the most ghoulish of the album, a horror-story ready piano riff floats atop constant bass and a piercing snare. Those are the only sounds on much of the track save Staples’ verses, each a remorseless and detailed account of murder, and a cower-inducing vocal sample from Future as a hook.

Staples trades in the angst of street life for the vulnerable angst of a budding relationship on the last song of disc one. (This after a more lusty track with a feature from Jhene Aiko.) But “Summertime” also peels away a layer and offers a drop of guard. “Hope you understand they never taught me how to be a man,” Staples sings competently, as he does throughout the song. Over the disc-break, he snaps back and quickly launches into “3230,” a brimming micro-biography that stirs up as much compassion as fear. The song is also a highlight in Vince’s technicality and he barrels through flows with a chaotic gymnastics. On “Like it Is,” a woozy No I.D. and DJ Dahi collaboration, Staples is at his most reflective, offering a wide-angle resentment and analysis. “You’ll kill me if it make you richer, what you screaming, you my brother for,” he raps, and then returning to a familiar despair, “We live for they amusement like they view us from behind the glass…in this cage they made for me exactly where you find me at.”

The news that Summertime ‘06 would come packaged as a double-disc signalled vaguely lofty ambitions and sparked worries of filler. Instead, a drawn-out runtime wasn’t the cause for the extra disc as much as an attempt at intentional pacing. (At 57 minutes the album is less than ten longer than YG’s Def Jam debut last year.) In an hour, Staples accomplishes plenty, roaming freely back through his formative crises and come-ups and grappling with how to present them to the world. No I.D. and company have helped him make music that’s both uncomfortable and lived-in, and Staples sounds more himself inside of it than ever before.