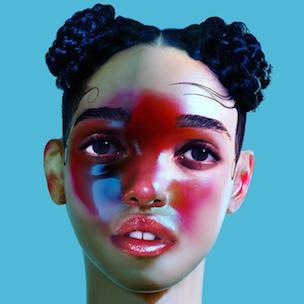 FKA Twigs has become a phenomenon of sorts. In this bubble where we are constantly searching for the next artist we can call our own, we can’t help but hold out hope for an album that fully engrosses us. That forces us to relive the first moment we engaged with a work that went beyond it’s chords, hooks and voices into the great emotional or artistic beyond. Twigs’ LP1 approaches this cliff and speeds over it “Selma and Louise” style into whichever space you wish it to, and it’s lush machinations are something you have to begin to appreciate, because you’ve never really heard anything like this before.

Her most apt comparisons are to the late-great Aaliyah or Bjork, but what puts FKA Twigs precisely into her own lane and out of the alt & B category defined by the likes of the Weeknd, Kelala, SZA, and Frank Ocean amongst others, is her strict allegiance to what feel like thoughts constructed in a vacuum — somehow separate from the broad cultural sameness that social media inevitably creates. It isn’t just the splintered, jagged sexiness of the sounds backing her gothic voice, but the way she weaves her shyness throughout each tempestuous note. Each song has a singular visionary arc that pushes the experience forward. From the hymnals of “Preface,” which opens the album into Twig’s world of sensuous emotionality, and away from the druggy, escapist hedonism of the male more’s which seem to dominate the conversation, to “Two Weeks,” “Pendulum” and the closer, “Kicks,” her music runs the gamut from masterful brush strokes to a living, breathing thing. Her lyrics are equally as alive. On “Two Weeks,” she entices and repels with “You say you want me/ I say you’ll live without it/ Unless you’re the only/ One who instigates, get your mouth open you’re high.” Or how, very Aaliyah like we admit, she gets you to buy into her pantheistic choruses like “So lonely trying to be yours/ Looking for so much more.” Around that gem her’s and it feels like all our lives turn. We’re only human, after all.

She’s a dancer, that much we do know. And she served in that pop music cauldron for a spell that almost came to define her. On “Video Girl” she blips out “Are you that girl from the video?” And I think we can all understand that heavy loneliness that comes with a life someone else has defined. She’s also from London, which has become a hotbed for innovative musical dexterity over the past decade. Every so often someone new comes out of the UK that blows your mind, and whether it’s the booming falsetto of Adele or the twitty languor of James Blake, they leave us looking at music in a new way. FKA Twigs is no different, and while her sounds feel like a dance movement through a sea of bodies, or an opera for an audience of one, we can’t help but think after one listen or a hundred that we have felt something new. In a world where we are bombarded with music constantly and we are inundated with the thoughts of others, finding a voice and a work as distinctive as hers has become the new goal. That isn’t to say that this sort of thing is for everyone. She’s not at all ironic here. There is no veil of cool to brush past. And, at times, her lyrical acumen seems lacking — as though she were grasping at straws. Still, though, on LP1 she gives us an intoxicating blend of mystery, and complex emotionality. In sum, the mysterious Tahliah Barnett has created a devastatingly beautiful and industrial debut, and hopefully we’ll have her for many filtered out synths and dive bombed metronomes to come.