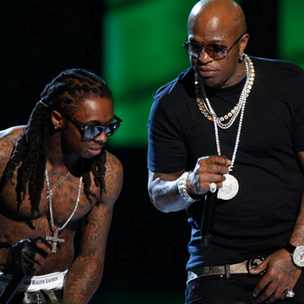 Birdman and Lil Wayne performed together at LIV nightclub in Miami yesterday (January 17), according to TMZ.

“This my motherfucking son and Ima die for him,” Birdman says to the crowd in a video captured by the website. “Ima live for him and Ima motherfucking kill for him. Ya hear me? That ain’t never gonna change, fucker. It’s YMCMB for life.”

The two were spotted together at Drake’s New Year’s Eve party a few weeks ago and Mack Maine says he is trying to get them to resolve their issues with each other.

Birdman, who Lil Wayne often refers to as a father figure, was named in an indictment for conspiring with Young Thug to kill Lil Wayne when Weezy’s tour bus was shot in April.

In January 2015, Lil Wayne filed a $51 million lawsuit against Birdman and Cash Money Records for delaying the release of Tha Carter V.

Watch the video of Birdman and Lil Wayne performing together at LIV below: