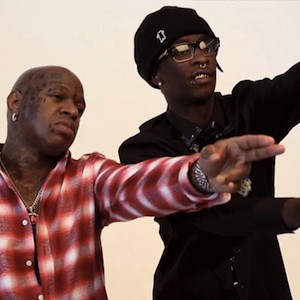 The dispute between Birdman and Lil Wayne may have reached its pinnacle as there are new reports that alleged violence and even conspiracy to commit murder have surfaced.

According to Mike Petchenik of Atlanta’s WSB-TV, an indictment stemming from an April incident in which Wayne’s tour bus was shot at multiple times names Young Thug, Baby and a third individual as culprits in a conspiracy to assassinate Weezy on his tour bus in Cobb County, Georgia. The alleged suspect, Jimmy Winfrey, who police say was the triggerman, was arrested in early June.

While Petchenik makes it clear that Thug (born Jeffrey Lamar Williams) and Birdman have not been charged with anything involving the incident yet, he later tweeted that prosecutors are looking into the trio’s “Blood street gang” affiliation and that Young Thug’s video for “Halftime” will be used as evidence in the forthcoming legal case.

The beef between Birdman and Lil Wayne, Young Thug and Wayne and the in-fighting between former and current YMCMB artists has been common news over the past year. Just earlier this week it was reported that Birdman threw his drink at Lil Wayne during his performance at a Miami nightclub.

Earlier today (July 15), Young Thug was arrested after police alleged that he threatened to shoot a Perimeter Mall security guard in the face and was charged with making “terroristic threats,” according to the Atlanta-Journal Constitution. Jim Joyner of the US Marshals Southeast Regional Fugitive Task Force says Thug was apprehended at his home this morning in Sandy Springs, Georgia.

Read WSB-TV’s report on the indictment.

View all of Petchenik’s tweets below as HipHopDX will keep you updated on this story:

Indictment alleges #YoungThug, #Birdman involved in conspiracy with third man to kill #LilWayne on his tour bus in #CobbCounty. #wsbtv.

More: #YoungThug and #Birdman aren’t charged in the indictment, only named by #CobbCounty prosecutors as working with Jimmy Winfrey. #wsbtv.