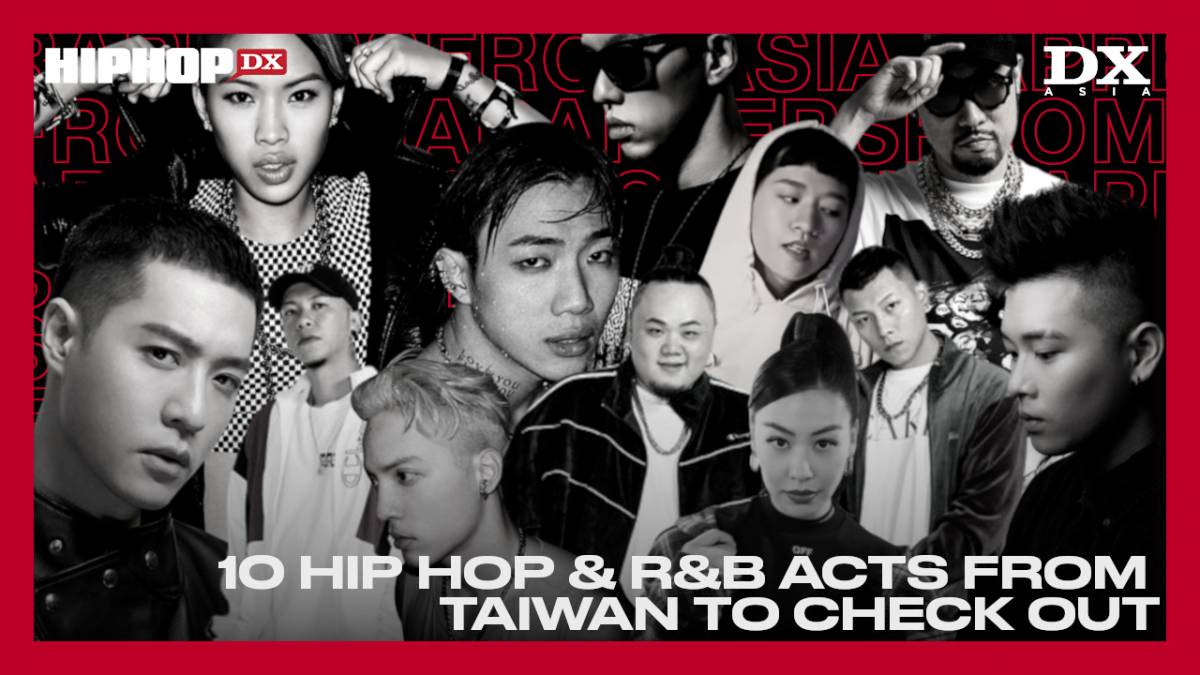 In the last few months, we’ve been sharing a series of primers for those who want to know more about the key players to check out in different hip hop and R&B scenes across Asia. So far, we’ve covered Nepal, Thailand, Cambodia, Vietnam, Malaysia, Indonesia, and most recently, India.

This time, we’re heading to Taiwan, whose colorful musical landscape has welcomed musical influences from all over since the 1960s. Throughout the 1970s and ‘80s, the Taiwanese embraced R&B and pop especially, while overseas, acts such as the now-defunct rap group L.A. Boyz became the catalyst for hip hop gaining momentum in Taiwan.

Since then, Taiwanese hip hop has been characterized by inventive reinventions of genres like pop, hip-hop, R&B, and new jack swing within underground scenes, and eventually, the mainstream. The Taiwanese youth was receptive to the burgeoning pull of the genre, in particular, banding together in communities for other subcultures like street dancing, beat-making, and rapping.

Taiwanese-American rapper, producer, and singer ØZI was born into a creative family as the son of renowned fashion photographer Chan Wenbin and legendary Mandarin pop diva of the1980s and 1990s Irene Yeh. Growing up between Taiwan and California, the artist has honed a perspective that bleeds into his ambitions for elevating Taiwanese music on the world stage through his work.

In 2018, his debut record ØZI: The Album earned him critical acclaim, and six nominations at the Golden Melody Awards, also dubbed the “Taiwanese Grammy Awards.” Out of those nominations, he ended up taking home the title of Best New Artist.

The multidisciplinary artist has ventured into fashion as well, modeling for brands like Chanel and Fendi, which by a stroke of luck, ended him getting recognized by American hip hop superstar Nicki Minaj on Instagram. In pursuit of his vision for making Chinese music a global force, he’s most recently signed on high-profile collaborations with Japanese rapper ¥ellow Bucks, Filipino singer-actor James Reid, and South Korean singer, songwriter, producer, and GOT7 leader JAY B.

Singer and rapper OSN made his debut in 2018 with the hit “Everybody Bounce” after being discovered online by singer and actor R-Chord a.k.a. Hsie He-hsian. Following his successful debut, he dropped his breakthrough hit “Without You” in 2019, and in the same year, he won the Mnet Asian Music Award for Best New Artist (Mandarin).

In 2020, the viral hit also earned OSN nominations at the 2020 Golden Melody Awards for Song of the Year and Best New Vocal. OSN is also active with his group CHING G Squad with fellow rappers SHOU, Chrisflow, and Red.

With a career spanning almost two decades, rap trio MJ116 has cemented their place as a musical phenomenon in Taiwan. The group, consisting of members E.SO, Kenzy Chou, and Muta, earned a name for themselves—as a group and individually—with their experimentation with rapping styles that went against the grain of popular sounds in music at the time. The group then went on to consolidate a reputation amongst young audiences, making them a favorite among clubs in Taiwan frequented by students.

Rapper and producer Soft Lipa is widely considered as of the same caliber of Mandarin pop star fame. Since the early 2000s, the artist has been regarded as a heavyweight in the underground hip hop scene. His jazz-influenced hip hop tracks have also earned him a loyal listener base due to his tender portraits of everyday life throughout his work, which he says, centers on “comfort.”

In 2020, he made history at the 32nd Golden Melody Awards as he won the two major awards of “Best Mandarin Album” for his 2020 album Home Cookin’ (家常音樂) and Best Male Singer (Mandarin). The music video for the title track, directed by Cowper Wang (王宗欣), won Best Music Video. He is also the founder of his own label RSDR, following his departure from Kao! Inc.

Taiwanese-American rapper Miss Ko is a New York native who takes inspiration from Tupac Shakur as she explores heavy themes, ranging from racism to domestic violence. Penning lyrics in both English and Mandarin, her music fuses her multicultural environment with genres of funk, soul, and jazz. In 2012, she captured Taiwan’s attention when she won “Best New Artist” at the 24th Annual Golden Melody Awards.

In a 2019 interview with Entrepreneur, she shared about her writing process, saying: “I use a lot of rhyme and rhythm, experimenting with various melodies and flow until I find the perfect one. I feel like an architect in that sense, designing a song and painting a story using rhymes.”

Hsien Ching crafts music that blends old-school rap, alternative hip hop, jazz, and contemporary R&B. Despite the diversity of Taiwan’s hip hop industry, female rappers or hip hop acts altogether remain a rarity. Ching has now built a steady audience for her laid-back approach to her work, which goes against the typical high-stakes production of the genre.

Since 2018, she’s been dropping her own music, beginning with homemade raps over beats available for free on YouTube. Today, she’s refined her knack for genre-bending music with more pop-dominated collaborations that still incorporate her easygoing flows, like “Could Say” with Howard Lee, and “街仔路雨落袂停” (At a rainy night would you walk me home?) with Enno Cheng.

Focus tracks: “街仔路雨落袂停” (At a rainy night would you walk me home?) with Enno Cheng; “Could Say” with Howard Lee

Rapper, DJ, actor, and producer NICKTHEREAL, also known as Nick Chou, first began in the music industry as a pop artist. In 2010, he debuted with a self-titled album, followed by his sophomore record S.N.G. in 2012. On making his music prior to honing his own sound, he says in a 2019 Taiwan Beats article: “Many people talk about the genre ‘pop’ in a negative manner, but I’d say it’s a myth. I was in an era when labels would not give you a chance unless you were hot already, so I had to play their game; on the contrary, times are different now, everyone gets to be who and what they want to be, it is a blessing.”

In 2016, he returned with a more refined sound with his third album REAL, showcasing his talents as a songwriter and trading his established Chinese pop sound for more R&B sensibilities. He made the unexpected move of joining the famed rap reality competition show Rap of China in 2018, wherein he completely reoriented his public image from being a pop idol to being more authentically himself as a hip hop artist.

Since then, he’s completely taken creative control of his work as a producer and songwriter, honing in on a hip hop-oriented sound which he hopes to continue bringing forth to mainstream audiences.

Focus tracks: “愛上你算我賤” (Falling in love with you counts me as cheap); “帥到分手” (Handsome to break up)

Rapper and singer J.Sheon is most known now for being a member of the Jackson Wang-led supergroup PANTHEPACK, under the latter’s label TEAM WANG. But before joining the global group, he got his start in music early through YouTube and officially debuted with his 2017 self-titled album. The following year, he performed at the Billboard Radio China Awards and won the 2018 Top New Artist award.

With PANTHEPACK, J.Sheon’s been heavily involved in their debut EP The Pack alongside members Jackson Wang, J. Sheon, Karencici, and ICE. While in 2021, he completed his first tour with the group across the Chinese cities of Chengdu, Wuhan, Shanghai, and more.

MC HotDog is recognized as Taiwan’s first underground rap artist, rising to prominence within rap circles before releasing his first full album Wake Up in 2006. His debut album was both a commercial and critical success, and the prolific rapper bagged the major title of “Best Mandarin Album” at the 18th Golden Melody Awards of 2007–a groundbreaking achievement for a hip hop artist at the time.

Since 2017, he’s also branched out into mentoring younger artists on reality competition shows like The Rap of China, I’m a Singer-Songwriter, Rap for Youth, and Youth Rap Project.

Female rap superstar Dizzy Dizzo previously made it to HipHopDX Asia’s list of 20 Best Songs of 2021 for her hit “Wifey,” wherein we wrote: “Although female empowerment has been rehashed time and time again by female MCs, the artist takes on the position with bold flair through a passionate call for nonconformity.”

This rings true for all of Dizzy Dizzo’s work since her debut in 2014. As a wordsmith, Dizzy Dizzo possesses a handle on language that reinvents the themes of her music creatively, never yielding to conventional takes.