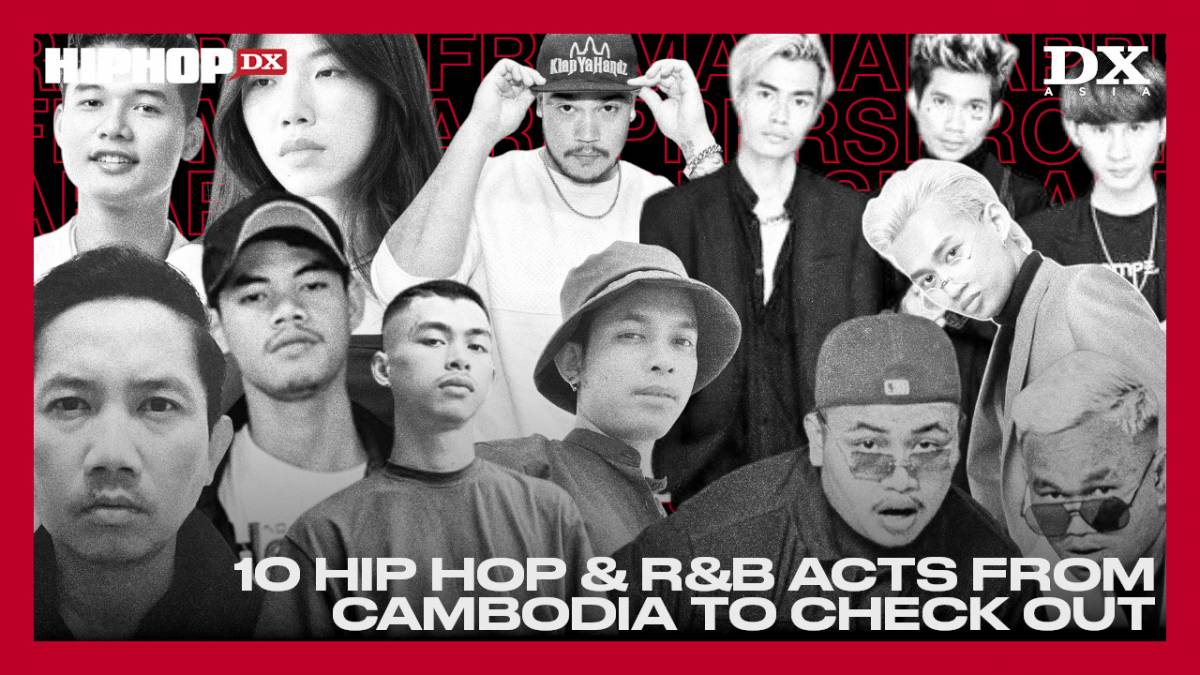 For the unfamiliar, Southeast Asia may be an unlikely hub for a thriving hip hop culture and scene. But for natives to the region, its influence pierces through our societies that celebrate the spirit of resistance championed by the genre.

At HipHopDX Asia, we pride ourselves on not just recognizing compelling artistry but, more so, artists who innovate hip hop through the lens of their culture and larger communities. We’ve previously covered Nepali rappers, and this time around, we’re heading over to Cambodia.

Undeniably, VannDa is Cambodia’s most recognizable face in hip hop right now. We’ve covered the record-breaking rapper and producer extensively in the past, but it seems that there’s always more to unpack with the artist. At only 25 years old, he made history with his breakthrough single “Time To Rise” featuring Master Kong Nay, becoming the most-viewed video by a Cambodian artist at nearly 90 million views as of writing.

This year, he’s also reached another milestone as the first Cambodian artist to go on a national tour to promote his highly anticipated sophomore album, $KULL 2. Which is to say, all these achievements serve as a testament to VannDa’s artistry, leading a new generation of Khmer artists who strive to collectively uplift original Cambodian music.

La Cima Cartel, founded by Songha and RXTHY, is a group of underground rappers whose range of talents and versatility are seizing the younger generation’s attention. Home to rappers YCN, Allergy, Meezy, Magvé Drill, and Mut Phearin, the group is an amalgamation of sounds that often experiment with traditional Khmer music, trap influences, and inventive rapping styles. If you’re looking to understand what exactly sets Cambodian hip hop apart, independent groups like La Cima Cartel encapsulate the kind of creativity one can expect from the country’s flourishing scene.

Sophia Kao’s siren-like voice is hard to miss among this list of artists. The Baramey Production singer builds on the influences of R&B and jazz in her music, highlighting her sultry vocals and often melancholy themes.

There’s something enchanting about Kao’s music, with her music transporting the listener to a rich inner world that feels undeniably young and always new. Especially when paired with her cinematic visuals, her presentation always feels intentional and cared for, lulling you in to keep your attention on her.

Hip hop group and dance crew Polarix creates music that just makes you want to move. As frequent collaborators with Baramey Production labelmates VannDa, A-GVME, and SONGHA, the group’s freedom to experiment know no bounds. Their music characterizes the kind of rambunctious atmosphere that comes naturally to youth.

With music that’s a little rough, rowdy, and unafraid to be blunt yet juxtaposed with synchronous, clean-cut choreography—Polarix are entertainers to the core.

RuthKo is a rising young rapper whose original music offers deeply personal lyricism complemented by a pop-influenced sound. A member of music collective and label KlapYaHandz, a trailblazer to the local rap scene since 2004, RuthKo began his career as a fan of the label before he was discovered by founder Sok Visal on YouTube doing video skits while studying in France.

He then eventually moved back to Cambodia in 2021, took a brief stint as a monk in a pagoda, and then joined the label’s extensive roster. Put shortly, everything else is history, and the rapper is now one of the rising hip hop artists in the country.

Another homegrown KlapYaHandz talent, Vuthea is a singer and songwriter inspired by the likes of “King of Khmer Music” Sin Sisamuth and Michael Jackson. With a flair for mixing genres from hip hop to pop and rock, the artist captures the rapturous joy of youth—very much mirroring his own experiences as an artist who first honed his musical skills while in high school.

Aside from his pop inspirations, he also cites being inspired by the “Golden Era” of music in Cambodia, beginning from its independence from France in 1953, roughly until 1970, when civil war broke out. This nostalgia for artistic and cultural reinvention has inspired many other artists like Vuthea, while he has taken up this inspiration by putting the innocence and free-spiritedness of being young into his music.

Singer, songwriter, producer, and music virtuoso Vanthan preserves the art of traditional Khmer instruments, one reggae-, pop-, and jazz-inspired track at a time.

During his performance at the ASEAN Music Showcase with founder and pioneer of original Cambodian music Laura Mam, it’s evident that the artists are not only musicians but vessels for the spirit of joy, liberation, and love so evident in traditional Khmer culture. Vanthan is also the creative force behind many other inventive tracks like labelmate VannDa’s “Time To Rise” and “Queen Bee.”

The multihyphenate proves that tradition when nurtured with an imagination that sees no limits, not only honors their heritage but also unveils fresh sounds that transcend language or culture.

In 2020, then-22-year-old Kea Sokun was arrested for his charges of incitement for his controversial nationalist songs, where he fearlessly included sentiments of rising against oppressors. He was released from jail in September 2021 but stands by his music, and, most importantly, his own principles. As he told VOD English Cambodia: “Going back, I would not have said sorry,” he said through a translator from his childhood bedroom shortly after his release. “Because I believe that I did not do [incitement] like what they said.”

Sokun had the option of publicly apologizing to save himself from the sentence but took the unthinkably difficult route to make a stand and believe that justice would find him either way. This kind of resolve is difficult to swallow for anyone else. In the face of state persecution, the rapper has breathed new meaning into the potential for hip hop to ignite change and serve as a platform that celebrates dissent in the name of peace. Not only is the young artist’s perseverance deeply inspiring, but his music and lyricism display a level of artistry that moves listeners.

Singer, songwriter, and rapper Van Chesda first rose to fame as a finalist on Cambodia’s Got Talent in 2015. Since then, the young artist has created a discography that fully represents his vulnerabilities and emotive approach to music. In a feature by The Khmer Times, Chesda shared that his musical process follows his emotions: if he’s happy, the track will most likely end upbeat. If he’s feeling down, sentimentality will come through, and a ballad will come out of it.

Like many other artists of his generation, he’s inspired to inject new life into original Cambodian music, fusing it with globally popular music and drawing inspiration from traditional Khmer musical elements. He’s especially passionate about encouraging other young people to take up songwriting as a way to involve themselves in the country’s burgeoning music scene and ultimately elevate their industry.

Long heralded as Cambodia’s first rap star and a pioneer of rap in the country, PraCH Ly’s story begins when he was born in a Cambodian refugee camp at the end of the Khmer Rouge regime. The Cambodian-American rapper seamlessly blends his natural skill for immersive storytelling in his lyricism with the contemporary American hip hop sounds he grew up with.

In the early 2000s, his debut album ‘Dalama . . . The End’n is Just the Beginnin’ found its way to his motherland from Long Beach, California. The record eventually became a hit in the capital city of Phnom Penh and became the top album in Cambodia under the name Khmer Rouge, Khmer Rap—without his knowledge.

The accidental hip hop great is now recognized for bringing hip hop to Cambodia altogether. Unpacking ideas of cultural identity, lost histories, and a reckoning of what it meant to piece together his culture after the end of Pol Pot’s hardline regime, PraCH Ly’s legacy of continuously homecoming and finding home is one that has only been expounded upon in hip hop today.