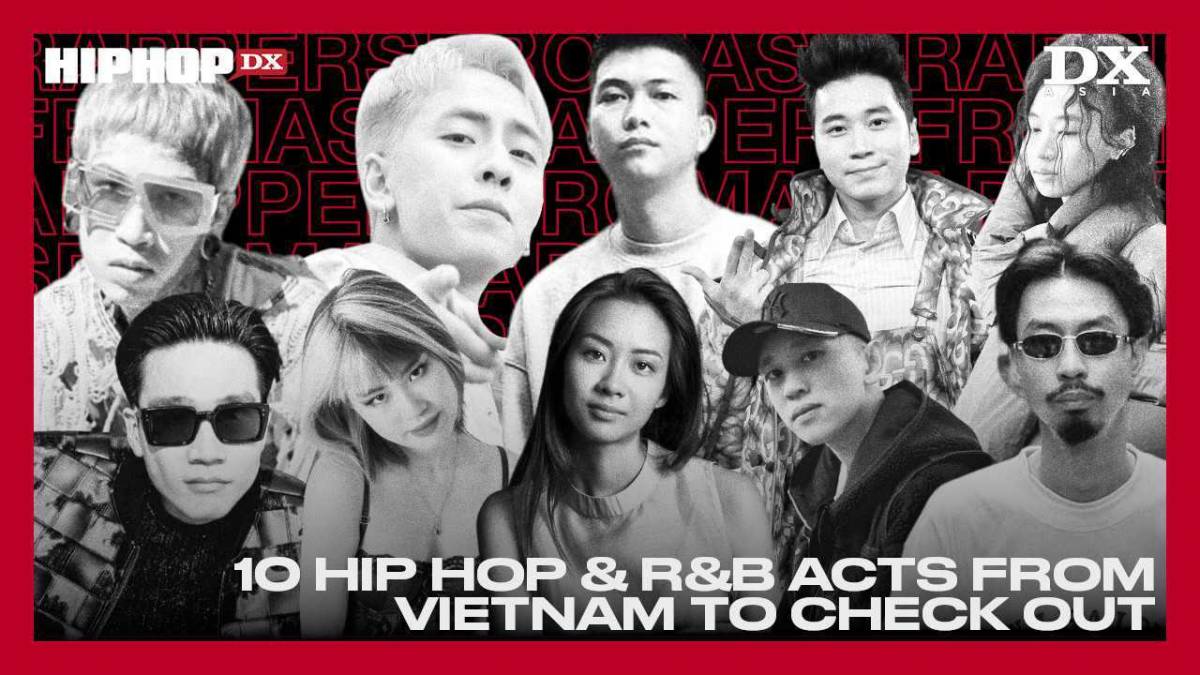 In nearly two decades, Vietnamese hip hop has evolved into a flourishing subculture not only within the music community but also in mainstream media and international visibility—most prominently with Suboi’s impromptu freestyle in front of former U.S. President Barack Obama in a 2016 public meeting in Ho Chi Minh City. With reality rap television shows like King of Rap, the art form and culture has captured public attention and cultivated a loyal community of rap fans.

Beyond the volume of work and artists producing such music, hip hop has undeniably found a home in Vietnam. Following our recent lists of vibrant hip hop scenes scattered throughout Asia from Nepal to Thailand to Cambodia, read on to discover 10 hip hop and R&B acts to check out in Vietnam: KARIK, Suboi, Osad, WOWY, Dế Choắt, Đen Vâu, keshi, BigDaddy, Pháo Northside, and B-Ray.

Originally a dancer, Vietnamese hitmaker KARIK has been earning his stripes in the underground hip hop scene for years before gaining success in the mainstream.

From beginning in the early 2000s with rap group SouthGan Z alongside fellow rap superstar WOWY (who also made it to the list), he’s produced tracks that have grown popular not only within Vietnam but across the region, including his 2018 collaboration with fellow artists Superbrothers and Orange, “Người Lạ Ơi !” (The Stranger) and 2020’s “EM BÉ,” with AMEE and BAEMIN. Currently, KARIK is a highly respected judge on the reality competition show Rap Viet.

Long heralded as Vietnam’s “Queen of Hip Hop,” Suboi has made international headlines for freestyling for former United States President Barack Obama and making it to Forbes’ “30 Under 30 List” in 2017.

She began her rap career while also working as an English school teacher and kid’s party clown. Today, Suboi is recognized for her bold musical choices as a female pioneer in the male-dominated space of Vietnamese hip hop. Her 2021 track, “Bet On Me,” was named one of HipHopDX Asia’s 20 Best Songs of 2021.

For the country’s young population, OSAD’s laidback sound has attracted a legion of fans who relate to his easygoing explorations of young love throughout his music.

OSAD started as an amateur rapper who uploaded clips of himself rapping on YouTube and accidentally became a viral star, eventually creating hits like “Yêu Sắc Yếu” (Love Weak Color) and “SUGAR BABY.”

Rap superstar WOWY is undoubtedly one of the most revered and recognizable artists in Vietnam not just within the hip hop community.

As an artist skilled in other subcultures of hip hop as a B-Boy and in graffiti art, WOWY’s creativity has been celebrated since he first started rapping in 2006 as a member of the group SouthGanZ.

Aside from being credited as a pioneer of street rap in the country, he’s also an award-winning actor and director. Since then, he’s gone on to create multiple hits while composing original soundtracks for shows like HBO’s “Here And Now,” and beyond music.

Dế Choắt began listening to rap in third grade and was influenced by rap heavyweight WOWY. He eventually had to drop out of school to help his family, working various jobs—from being a porter to selling lottery tickets—and eventually training as a tattoo artist, all while rapping in Vietnam’s underground scene.

In 2020, Dế Choắt joined the competition show Rap Viet’s first season, where he underwent mentorship from none other than WOWY himself and eventually won. During the show, he also caught the attention of judge Suboi.

Since winning the show, the 26-year-old underground rapper has become a fixture in the hip hop industry and has collaborated with hip hop giants in the industry, including WOWY in the 2021 track, “SỐNG GẮT.”

Veteran rapper Đen Vâu is one of Vietnam’s most honored lyricists, exploring themes such as homecoming, family, and his own journey as an artist who began independently before solidifying his place in the music scene.

According to Vietnamese music website vpopwire, Đen grew up in a working-class family in Quảng Ninh province, where he once also worked as a beach cleaning worker. In 2019, he was also named the most streamed artist in Vietnam, embodying the classic underdog success story by virtue of hard work.

Rising Vietnamese-American singer keshi is undeniably a star in the making. A consistent placeholder on our Best Music of the Week and Best Asian Hip Hop And R&B Of 2022 (So Far) lists, the young artist is quickly becoming one to watch on the world stage.

His debut album GABRIEL, which we dubbed a “classic in the making,” premiered earlier this year. Keshi is now embarking on his first tour in the United States.

Veteran rapper BigDaddy first started as a member of Hanoi-based group Ladykillah, before venturing into a highly successful solo career. Since his 2013 breakout track “Tình Yêu Màu Nắng” (Sunshine Love), he’s now grown to be one of Vietnam’s premier artists.

Before becoming one of the biggest names in Vietnam and a judge on the wildly popular Rap Viet, B-Ray first gained attention for his rap battle tracks which regularly garnered millions of views on YouTube.

In 2019, his track “Ex’s Hate Me” made history by staying on the YouTube trending chart for two weeks straight. Now venturing into more of an easygoing pop and R&B sound paired with his signature witticisms in his more recent tracks, the artist’s success continues to skyrocket.

19-year-old Pháo Northside, also known as Pháo, might be the youngest on the list, but throughout her young career, she has proven that she’s a force to be reckoned with.

In 2020, she caught the internet’s attention with her debut track “Ganh” (Jealousy), while her collaboration with American rapper Tyga “2 Phút Hơn” (2 Minutes More) became another viral hit on TikTok.

The Gen Z star has yet to release a debut album but at the moment, all eyes are on the young female rapper.