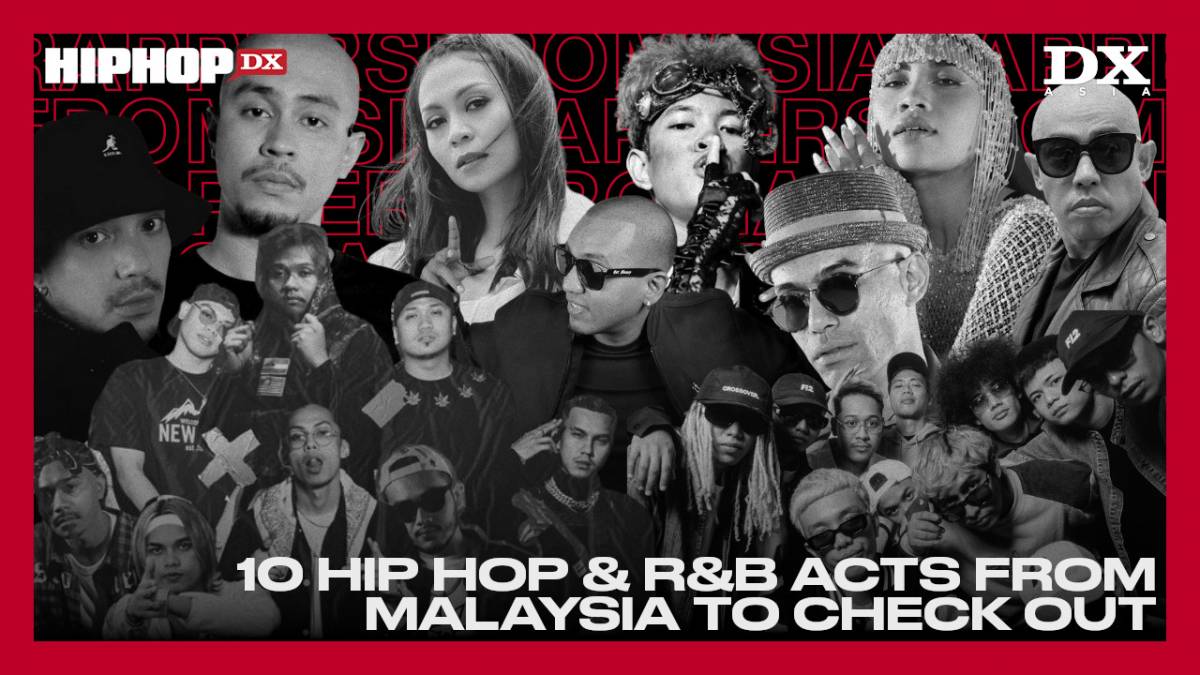 From Nepal to Thailand, Cambodia, and most recently, Vietnam, HipHopDX Asia aims to provide a platform to Asian hip hop and R&B artists who may often find themselves eclipsed by their more pop-centric or mainstream peers. At present, thanks to the influence of icons such as Too Phat—who helped bring hip hop to the masses—and the groundbreaking 16 Baris show, Malaysia is unsurprisingly one of the most diverse hip hop communities in Asia today.

One can’t talk about Malaysian hip hop without recognizing trailblazer Joe Flizzow, who is undoubtedly a force within the Asian hip hop scene altogether. Also dubbed as Malaysian hip hop’s ‘president’, Flizzow was instrumental in popularizing the genre, beginning with his work as one-half of iconic hip hop duo Too Phat alongside fellow rapper Malique, which flourished in the 1990s.

He eventually went on to cement his place as a solo rapper in the mainstream with records like President in 2008 and Havoc in 2013. He eventually founded the independent record label Kartel Records, representing a roster of highly skilled MCs and producers, including fellow placeholders on this list Altimet and SonaOne.

Today, Flizzow is recognized as a global icon. He is currently the managing director of Def Jam South East Asia and has had a long list of international collaborations, including American hip hop icon Snoop Dogg and South Korea’s Jay Park.

MC Syze’s breakthrough 2008 hit “Dancin’” is now regarded as a classic in Malaysian hip hop, thanks to its effortless fun as well as street smarts. The Brickfields native started pursuing rap in the local underground communities as a college student and eventually learned how to write lyrics from the legendary former Too Phat member Malique.

After a long hiatus and stints in hosting at clubs, the veteran rapper returned with his long-awaited debut album Syze Does Matter last year, which made it to the list of HipHopDX Asia’s ‘20 Best Albums of 2021.’ On the record, we wrote: “Syze Does Matter, isn’t a feeble attempt at a comeback but an honest, sobering effort that points towards a brighter direction for the veteran MC.”

Johor Bahru-based FORCEPARKBOIS is one of the most exciting groups in Malaysian hip hop right now. The 11-member group’s viral 2021 hit, “LOTUS,” not only achieved international buzz but has since been remixed by various crews from different countries, including an “all-star” version.

South Korea’s Jay Park, pH-1, and JAY B put their spin on the viral hit along with other H1GHR Music artists last year, following Brunei’s ASMAI, Mancientry, MZL, Nuuz0l, Riff, Supahmiyagi, Swanz, Troqy, Vandalisma, and WAZ who also did a remix of the track in June 2021.

Singaporean acts Fariz Jabba, omarKENOBI, MIIKOTHE13TH, AE$OP CA$H, Frank Loco, YHB Sleepsalot, and Akeem Jahat, as well as singer-songwriter Khally and stand-up comic Fakkah Fuzz did a remix of “LOTUS,” bridging together what seemed like a cross-cultural phenomenon in Asia. Despite only being in the industry for a few years, the group has steadily amassed a strong following and transcended borders with their distinct sound.

Another group on the list is K-Clique, who are widely regarded as another great in Malaysian hip hop. The eight-member group—consisting of members MK, Noki, Tuju, SoMean, KDeaf, FareedPF, Gnello, and NastyNas—first banded together in 2014 and has since went on to solidify their genre-bending sound with pop influences and individual rap styles. In 2019, the group was named as one of the most-streamed Malaysian artists on Spotify.

Last year, K-Clique member MK also made history with Joe Flizzow and Jay Park on the track “Ciao” which was produced by Singapore’s ALYPH and co-produced by another placeholder on the list, SonaOne. The group has since come a long way throughout their eight-year journey.

Rapper and producer Yonnyboii is a young artist who has managed to capture the attention of his generation’s listeners. The artist has been producing music since 2016 and finally gained commercial success with his debut single “Takut” (Scared) in 2019.

At the end of 2020, he was the most-streamed local artist, and just last year, he made history again with the Philippines’ Matthaios and Thailand’s Sprite for “Trust Again” inspired by Disney’s Southeast Asian-inspired Raya And The Last Dragon. Currently, he’s in the process of finishing his first studio album.

Rapper, producer, and songwriter Altimet is another veteran rapper who rose to fame in the late nineties and early 2000s. Beginning as a member of the hip hop group Teh Tarik Crew, he’s built a career through his masterful lyricism which has also sought to bring commentary and critique to Malaysian society.

In 2018, he retired from performing but has since shifted his focus to songwriting and producing. As an artist, the rapper has generously contributed to solidifying and reconciling Malay identity within Western hip hop. Last year, he made headlines by entering politics by joining the Parti Keadilan Rakyat (PKR), also known as the People’s Justice Party.

This list wouldn’t be complete without Yuna and her spellbinding vocals. The singer, songwriter, and then-law student got her first taste of viral internet fame in 2009 on MySpace. She then began her career as an independent artist, signing with New York-based label Fader Label which then led her to collaborate with American R&B icon Usher on her breakout single “Crush” in 2011.

Throughout her career, she’s managed to shatter cultural barriers and make history while collaborating with artists like Tyler, the Creator, Epik High, Jay Park, G-Eazy, and Jhené Aiko.

Starting as a graffiti artist before going on to become an innovator in hip hop as a songwriter, rapper, and producer, SonaOne first caught the attention of Joe Flizzow in 2005 when he was still in his teens.

Honing his skills under Flizzow’s mentorship, the French-Malaysian artist signed under Flizzow’s label Kartel Records in 2010 as a member of G.O.D Music (Gentlemen On Dinosaurs) and has since then established himself as a solo artist with a vibrant solo career in his own right.

Mostly known for his production capability, he gained prominence as a beatmaker and garnered the admiration of other Asian artists, such as Thailand’s Dandee and Brunei’s Sheikh Haikel.

Sophia Liana is a singer and rapper who first debuted in the industry with the girl group De Fam in 2015. Since venturing into a solo career, she’s proven her chops as a rapper and is now considered one of the top female rappers in the country.

Venturing into acting and hosting, Liana is an all-around artist who has collaborated with artists like Harith Zazman and Wany Hasrita. Last year, she hit another career milestone after she was chosen to represent Malaysia at the ASEAN-Korea Music Festival 2021.

Rapper and producer Aman RA first debuted in the hip hop scene rapping under the name Kraft with the group College Dropouts in 2006, alongside fellow hip hop luminary Caprice. He gained a following after winning a succession of rap battles and soon after, produced his breakthrough single “Diamonds” in 2010 which went on to win awards like Best Hip Hop/Urban Song and Song Of the Year at Voice Independent Music Awards 2010.

He then went on a break and took the moniker Aman RA, and since then, has reinvented his solo career by using his lyrical prowess to shed light on his personal struggles while mirroring others in Malaysian society.