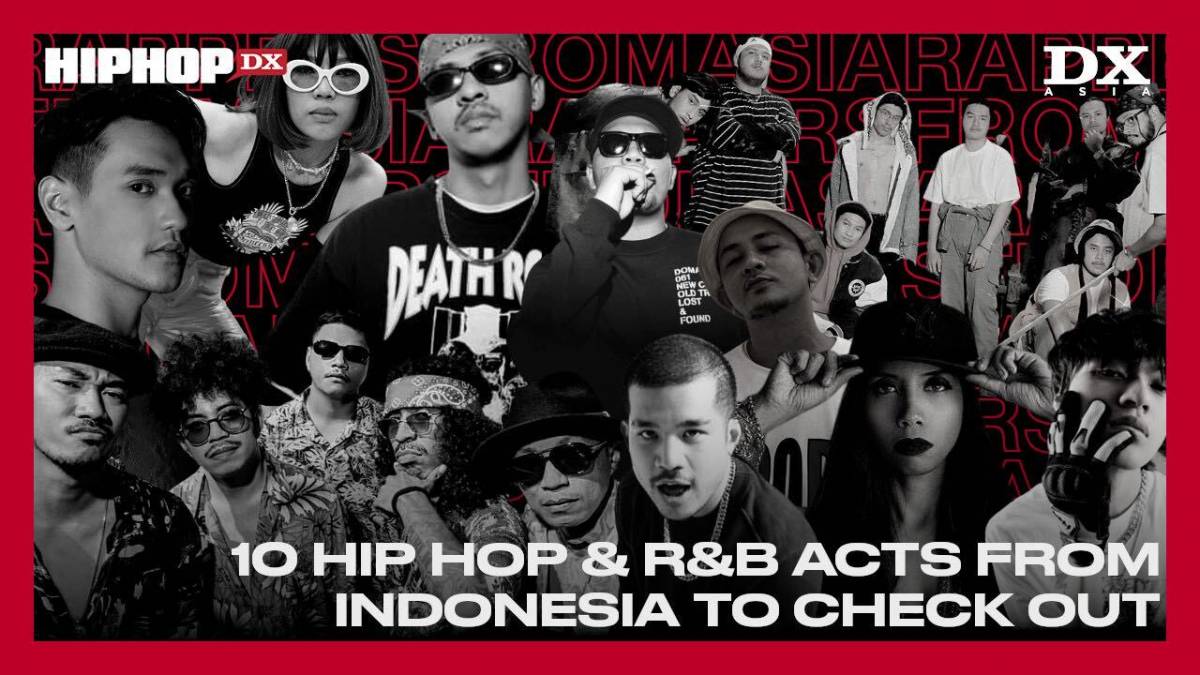 From covering Nepal to Thailand, Cambodia, Vietnam, and most recently, Malaysia, HipHopDX Asia is now heading to Indonesia.

Since hip hop’s *arrival* to the country in the 1990s, local practitioners made it a mission to authentically represent youth, traditional, and street cultures from different areas and backgrounds—from rural to urban areas, tribes to crews. As the industry grew, Indonesian hip hop grew from primarily taking inspiration from its American roots to a conscious stylistic direction of merging traditional Indonesian culture and language with hip hop’s Western roots, mixed with a myriad of genres like metal and rock.

In our latest list, we share 10 Indonesian hip hop and R&B artists to check out, in no particular order: RAMENGVRL, Keilandboi, JEREFUNDAMENTAL, ENVY*, Tuan Tigabelas, A. Nayaka, Mukarakat, Afgan, Warren Hue, and Yacko.

Female rapper RAMENGVRL is one of the most recognizable faces of Indonesian hip hop right now. The Jakarta native accidentally became famous in 2016 after uploading a track on her SoundCloud account while writing her thesis at university, eventually capturing the attention of local hip hop fans. Later that year, she joined rap collective Underground Bizniz Club and dropped her first official single and breakthrough hit “I’m Da Man.”

Since then, the rapper has made a name for herself by challenging conventionality—whether through rejecting unrealistic beauty standards in “I’m Ugly,” resisting the conservative policing of Asian women’s behavior in “Ain’t No MF” with South Korea’s pH-1, to calling out disloyalty in “Fake Friends.”

The Indonesian rapper also made appearances on rap show shows like 16 Bar Indonesia Jakarta Cypher, showcasing his quick wit. As of writing, KeilandBoi has yet to release a full-length debut record.

Independent artist JEREFUNDAMENTAL is a veteran rapper who’s been actively creating music since 2006. Honed by his experience in numerous rap competitions and showcases, along with a commitment to creating original music, the rapper is known for his poetic lyricism and commanding delivery. His most popular tracks include “Fanatik” and “Total Brutal,” the latter wherein he unloads his frustrations against internal and external forces that consume him.

South Jakarta-based hip hop collective ENVY*, an abbreviation for Expect Nothing, Valid Yesterday, made its official debut in 2018. While the group drew comparisons from other sizable collectives such as BROCKHAMPTON and the defunct Odd Future, ENVY* incorporates “heavy-808 futuristic punk” to old school hip hop, along with new wave and traditional Indonesian influences.

A force to be reckoned with, Tuan Tigabelas’ renown goes beyond the coasts of Indonesia. The rapper began his career as the lead of hip hop group R.E.P. in 2013, before deciding to pursue his solo work. In 2019, he then premiered his debut solo album Harimau Soematra via his label, Westwew.

Throughout his career, Tuan Tigabelas lent his voice to urgent causes like the reality of climate change in “Fought The System” and calling for the end of violence against women in the country in “Enola” with fellow artists SicknessMp, Njet, and Boris. Thematically and artistically, Tuan Tigabelas has never shied away from articulating ugly truths that disproportionately affect the most vulnerable sectors of our communities, using his art as a vehicle for change.

A.Nayaka, also known as Ariel Nayaka, grew up between the United States and Indonesia, shaping his worldview and by extension, his future sound as an artist. As a bilingual rapper and singer, Nayaka’s work balances the two languages of English and Bahasa while exploring genre-splicing sensibilities with drill, R&B, and pop, to name a few.

In 2018, the rapper made history when his English-language album Cadence Blue became the first hip hop album to ever be nominated for Album of the Year at the prestigious Indonesian Music Awards. The next year, he became the first artist signed to Def Jam Indonesia.

Rap group Mukarakat was formed in 2017, consisting of members Lipooz, DirtyRazkal, D’Flow, I’m Rapholic, and Dj GeraMar. Known for incorporating traditional Indonesian culture and elements with their old school hip hop-inspired sounds, the group is now one of the country’s most beloved hip hop acts.

Afgan is a singer, songwriter, and actor who seems like another accidental superstar who stumbled into fame. After recording a private album with friends in a recording studio one day, he was immediately offered a recording contract.

In 2008, he debuted with Confession No. 1, and has since gone on to make certified pop and R&B-inspired records like The One from 2010 and L1ve to Love, Love to L1ve from 2013. Last year, he made his international debut with the English-language single “Say I’m Sorry” with American label EMPIRE which also manages RAMENGVRL.

Although he’s made a name for himself primarily as a pop singer, even earning multiple Indonesian Music Awards for categories like Best Pop Male Solo Artist, the multihyphenate is now reinventing his sound on the world stage with a clearer R&B direction.

At only 20 years old, Warren Hue is quickly growing as a force in Asian hip hop and R&B with New York-based label 88rising; home to fellow Indonesian superstars Rich Brian and NIKI. Like many other artists of his generation, he started by creating music in his bedroom and uploading his original works on SoundCloud, which eventually gained him traction online.

The rapper, singer, songwriter, and producer has since made strides in the international music scene, like being part of Shang-Chi and The Legend of The Ten Rings: The Album, the official soundtrack to the Marvel film of the same name. Most recently, the artist even made it to Forbes’ ‘30 Under 30’ Asia list, which honors leaders who are “redefining the future of business and society in Asia.”

Hailed as a legendary female rapper, Yacko is a prolific lyricist who spotlights women’s issues throughout all her work. Throughout the 1990s and early 2000s, she produced hits like “So What?!” and built a name for herself as one of the leading female figures in the country’s mainstream hip hop scene.

Beyond being a rapper, she’s also a lecturer and humanitarian, and intertwines her advocacies within her musical projects like in her track “Hands Off,” wherein she fights against sexual harassment and the right for women to feel safe in public spaces. In 2019, she represented Indonesia in the international La Belle Hip Hop festival in Belgium, a musical event that celebrates women in hip hop.