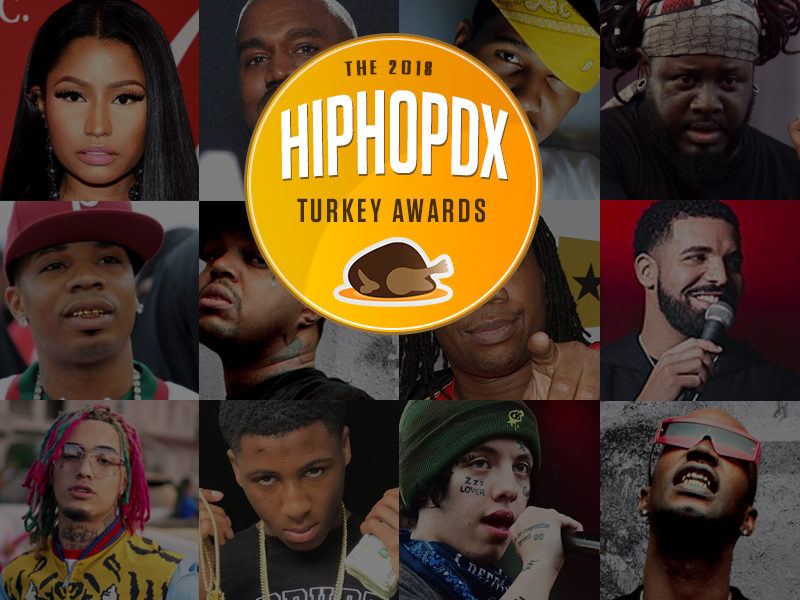 Fourteen years is a very long time not only to be eating your aunt’s dry ass turkey every year but to also endure endless rapper ridiculousness.

Yet, that’s the length of the consecutive run for the HipHopDX Turkey Awards.

Thanksgiving is a time for remembrance and love. However, we always deem a great time for a roast.

On that note, onward to the 2018 Turkey Awards.

Forget Nasty Nas. Ladies and gentlemen, meet Nasty Nicki. Despite her self-proclaimed royalty moniker, Nicki Minaj acted like anything but this year. Black Barbie showed her true colors when her fourth studio album, the (in)appropriately titled Queen, was rolled out in August. When the Billboard 200 numbers came out following its release, Nicki was outraged she wasn’t given the chart’s metaphorical crown, for Travis Scott’s Astroworld bested her sales tally.

Subsequently, the sore loser accused Scott of essentially cheating her out of the No. 1 spot by selling merch bundles.

Nicki also proved she couldn’t take any type of criticism — constructive or otherwise. On multiple occasions, Nicki laid into people on Twitter who dared to slander her name. In fact, it got so bad the New York Times wrote an extensive story about one of Nicki’s critics who was sent death threats by the Twitter Barbz after their leader declared war on the woman. Let’s not forget the Cardi B drama that finally came to fruition — just like fans wanted. Things reached fever pitch during New York Fashion week when Cardi allegedly threw a shoe at Nicki for liking (and then unliking) a negative comment about her parenting skills. From there, they took their beef to social media where it got ugly … really, really ugly. Get over yourself, Pinkprint.

Xan, Xan, Xan. Bless his little heart. The 22-year-old shit-starter caused social media to utter a collective “WTF” when he claimed he was taken to the hospital by ambulance for eating too many Flamin’ Hot Cheetos. In an era where so many young rappers are losing their lives to prescription drug abuse, it almost felt disrespectful. In the back of people’s minds — maybe even at the front — “overdosing” on Cheetos seemed fishy. Or cheesy.

Sure enough, shortly after his hospitalization, Xan announced he was going to rehab — and no, it wasn’t for his orange cornmeal puff addiction. Xan has been struggling with opiates and well, probably Xanax considering his moniker. Xan has vowed to get clean, finish his album Be Safe and reemerge with a new rap name — and hopefully a better diet.

When it comes to STD admissions that literally nobody asked for, Hip Hop has seen its fair share. Even ODB was burned once (but it was only gonorrhea). Herpes, though, is forever — and YoungBoy Never Broke Again admitted to having the disease in a song titled “Can’t Be Saved.” Fans were understandably confused as to whether he was being serious or not. Luckily the rapper’s on-and-off again girlfriend took to Instagram to answer the “burning” question on everyone’s mind.

She confirmed the infection, adding to the unsolicited information that she too was infected. Aside from proving he doesn’t care what people say about him, she also noted that a main motivating factor was owning up before detractors could use it against him. Basically the Eminem 8 Mile strategy. Did anyone actually have that tea ready to go?

The Mind Playing Tricks On Me Award: Lil Pump

Maybe it was the weed (like 90 percent maybe), but after discovering alleged intruders were outside of his residence, Lil Pump took no chances and fired a single shot out of his door. The problem is, his initial Soulja Boy-esque report to police claimed three suspects attempted to enter the apartment (owned by his mother) and fired the shot first changed with each retelling, and was almost immediately proved to be false after police did a light investigation proving the shot came from inside the home.

Aside from putting his mom in the hot-seat for endangering a minor and having an unsecured gun at home, it also led to house arrest. It worked out because he’s rich, but he later earned and violated probation, garnering some light jail time he has yet to serve. Esskeetit!!!

This year has seen DJ Paul go on a Twitter tirade against Juicy J then claim his longtime collaborator officially left Three 6 Mafia. Meanwhile, the Juiceman says everything’s good and he’s willing to work together again. To make it all the more confusing, Gangsta Boo and Crunchy Black — the other living members of the group — are just as clueless about the situation as Three 6 Mafia fans.

These people have literally known each other for decades. Can’t someone get everyone on the phone to settle this mess? How about a DM? It is 2018 after all.

Unfortunately, rappers getting busted for bringing guns to airports is nothing new. Waka Flocka and the late Guru are among the rhymers who’ve caught charges for it before. But this year, it seemingly became an epidemic. Three different artists — Juelz Santana, Plies and T-Pain — got caught with firearms at the airport within a six-month span!

Santana made the biggest mistake of all when he fled the scene when his loaded weapon was found. He’s since pleaded guilty and will be sentenced in December. Plies and T-Pain were luckier. Ol’ Algernod was initially charged with a felony, but it was later dropped. Teddy Pain got off scot-free when cops let him go after TSA agents found a gun in his bag. There’s a super easy lesson to be learned here, but apparently, it’s not getting through to rappers.

You Were Hiding A Child Award: Drake

The infamous “You are hiding a child!” line will forever live in Hip Hop lore despite Drake’s post-diss track spin, which saw him publicly confirm his fatherhood on his Scorpion album marquee stage. Old gossip rag reports about Drake denying paternity of the child started looking bad in the light, and the typically Teflon Drizzy suddenly needed Rap-A-Lot founder J. Prince to help institute a ceasefire. The OVO superstar made a big mistake by bringing Pusha’s wife into their beef and took the first clear-cut L of his career as a result.

Kanye West indefinitely proved he “couldn’t be managed” this year due to the numerous stunts he pulled. Who would have thought Kanye’s most inflammatory comment wasn’t “slavery for 400 years sounds like a choice?” Following that trainwreck TMZ Live interview, he later suggested the 13th Amendment should be abolished without clarifying what he actually meant. Things just went downhill from there. Whether it was his visit to the White House where he pontificated about … um, something … or his relentless (and blind) support of 45, Kanye’s behavior was on another level.

Not to mention, every album he released this year — including his own solo album ye, Nas’ Nasir and his collaborative joint with Kid Cudi Kids See Ghosts — was preceded by a shit show of a “listening party.” Then, there was his bizarre Saturday Night Live performance that saw him rapping dressed as a giant Perrier bottle and the post-show political rant that made everyone uncomfortable. It’s almost like all consideration for other people just went out the window along with his self-respect — and the Yandhi album he promised his fans in September.

Let’s not forget, he claimed he was taking his “alien ‘Ye” alter ego to Africa to finish it but came back and delayed its release yet again. But hey, at least he gave us those fire “Scoopity Poop” bars. To save face, ‘Ye denounced politics in October but his MAGA hat could rear its ugly head at any moment.